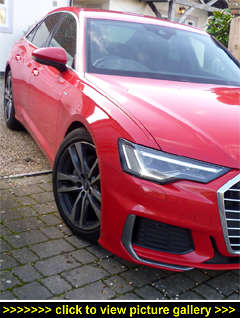 “The new A6’s beauty is more than
skin deep — it handles better, its
classy cabin is more spacious, and
it majors on useful and convenient
high-tech...”

AUDI'S LATEST LUXURY EXECUTIVE SALOON, bigger than the model it supersedes, is a satisfyingly assured piece of design. Go for the S line spec with its exclusive body detailing, adaptive Matrix LED headlights and dynamic rear indicators, and there's a subtle air of aggression added to the handsomely proportioned and tautly styled bodyshell, particularly around the low-slung single-frame grille, making it both understated yet eye-catching at the same time.

This week we've been driving the likely best-seller, the 2.0-litre diesel 40 TDI (as Audi's decidedly smooth 201bhp four-pot turbodiesel is badged) that comes partnered with a seven-speed twin-clutch autobox. A top speed of 152mph means it's faster than most drivers will ever go; and quick enough off the mark — it hits 62mph in 8.1 seconds from standstill.

It's an impressive engine — performance is strong and, thanks to 295lb ft of torque, punchy, and while it might raise its voice during a hard-charging overtake, it never shouts. In fact in general driving Audi's creamy new diesel unit is especially quiet and your passengers will be hard-pushed to notice it at all. With virtually no engine, wind or tyre noise intruding into the A6's cabin, progress rarely feels anything less than effortless.

The 2.0-litre is also a nice fit with the silky and quick-changing S tronic autobox — between them they've got the refinement thing nicely sewn up and high-speed cruising is delightfully serene.

If you prefer 'snappy' (in the nicest possible sense) shifts to just 'quick' ones, use the S tronic's Sport setting or the Drive Select's Individual mode to mix-and-match a customised 'press on' setting or select the most appropriate from the wide spread of driving profiles (the just-mentioned Individual, Efficiency, Comfort, Auto, and Dynamic).

And for those with a hankering for some DIY there are paddle-shifters on the steering wheel so taking full control of the gear changes is a given whenever you need or want to. All A6 engines (the other powerplants are a 340hp petrol 3.0 TFSI and a 286hp 3.0 turbodiesel) also come with integrated mild-hybrid technology (MHEV) that, using stored energy recovered during deceleration, enables fuel-maximising coasting with the engine running at idling speed between 34 and 99mph when you take your foot off the accelerator.

The instant you accelerate again power is restored quickly and smoothly. MHEV also initiates the start-stop function earlier, at speeds of 13mph and below; cleverly, the A6 restarts the moment it senses the car ahead has moved off, so none of those irritating pauses after the lights have changed.

More good news about the turbodiesel's economy — officially, the combined cycle is rated at 62.8mpg and a week's hard driving saw us record a very credible real-world 46.6mpg for this big saloon. Starting with a full tank gives you a possible range of 650 miles; if you want more there's always the option of specifying a larger tank.

Underpinning this new A6 is a rigid hybrid aluminium spaceframe platform, as found beneath its A7 four-door coupe and A8 limousine stablemates. Four suspension arrangements are on the menu: conventional steel springs with a multi-link configuration, the same again but with a lowered Sport suspension (standard on S line versions), plus two further options; adaptive dampers, and air suspension.

Naturally quattro four-wheel drive is available although the 40 TDI tested here uses the more sporting S line set-up and puts its power down through the front wheels. Even so, grip is good and, thanks to first-rate body control and firmer damping, the cornering composure is markedly confident. Overall this new A6 feels agile and light — no mean feat for a luxuriously-appointed, five-metre-long saloon.

While there are tick-box upgrades for the steering the default choice makes use of a speed-sensitive variable ratio arrangement that becomes more direct as lock is applied and feels sufficiently connected to the A6's sharp-end to make placing the car accurately a breeze.

You can, should you wish, use Drive Select to add more weighting to the helm when you set your customised mixed-and-match preferences for the various dynamics such as steering and handling in the Individual mode. Another option on the table is rear-wheel steering that, notably, makes the A6 not only feel shorter but turn sharper. That said, the standard set-up is perfectly fine.

While there are a number of different suspension options on the menu, the standard steel springs supporting the lowered S line confidently manage the A6's size and weight to serve up a fluent, well-damped ride — even on pretty rubbishy blacktop. Surprisingly for a German car, even running large 19-inch diameter alloy wheels (rolling on 245/45 Bridgestones) doesn't spoil the ride on UK roads nor compromise refinement.

Audi does interiors superbly and the A6's is no exception — it's beautifully presented with a cool, high-grade ambiance and tasteful materials: matt brushed aluminium (to the dash, centre console and door trims) and soft black leather upholstery with grey contrast stitching. The front Sport seats have effective side bolstering that keeps you comfortably located when cornering, and extending thigh/under-knee support. Naturally they're heated (3-stage) and power adjustable, including for the seat-base rake and four-way lumbar. And genuinely as supportive as they look.

The driver gets a two-setting memory function to recall personalised seat and mirror positions as well as a lovely-to-grip three-spoke multifunction wheel with a perforated leather rim. The well-judged driving position provides clear views in all directions but particularly over the bonnet. Keyless entry, a powered easy-entry-and-exit seat, and push-button engine start make getting in and getting away a speedy affair.

The dash is a bobby-dazzler with two HD touchscreens integrated seamlessly within the centre stack and fascia: the upper, a 10-incher, handles infotainment and navigation — well-liked highlights include 3D city models with realistic building texture and road lane illustration for selected cities, and navigation with Google Earth; the lower 8.6-inch display is used for climate control, convenience functions, and for fingertip-writing text input. There's also search with voice control, wireless smartphone charging with signal boosting plus an additional Bluetooth interface so two mobile phones can be connected simultaneously.

Tick the box for the Technology Pack (Ł1,495) and the screen tally rises to three as you then get Audi's outstanding Virtual Cockpit — this replaces the instrument cluster with a 12.3-inch digital instrument screen that displays information tailored to the driver's need including digital road speed, 3D mapping, media, driver assistance systems, telephone, etc. The digitally rendered dials can be resized with a press on the wheel's View button so the navigation mapping can be shown across the full display.

Comms are now a whole lot cleverer with natural voice recognition to let you control the technology in a more intuitive way — a wider range of conversational commands are now recognised for a more natural dialogue between car and driver. Questions and commands are processed in two ways — with onboard stored data, and also with detailed knowledge from the cloud. Additionally, up to seven drivers can store their preferred settings in individual user profiles as well as set up to 400 parameters.

Configurable favourites buttons also help tailor the system to your preferences and with this comprehensive array of smart-tech under the command of your fingertip and your voice you can operate most of the important functions using the buttons and scroll-and-click thumb-wheels on the multifunction steering wheel while keeping your eyes safely on the road.

Usefully, an optional Audi Connect key lets you enable an Android smartphone to lock and unlock the car and to start the engine — and you can pass the access data onto five other people or smartphones. Also part of the deal is Audi's Connect (which comes with a 36-month subscription) and facilitates emergency and roadside assistance.

Standard-fit driver assists include Audi's Parking System Plus with a rear-view camera, the Pre-sense Front collision warning and automatic braking system that monitors the traffic ahead for potential collision hazards, and the Lane Departure Warning system.

Not as hard to fathom as The 39 Steps are the 39 driver assistance systems designed to make life easier for the driver. Such as, for instance, the parking and garage pilot that will autonomously manoeuvre the A6 into and out of a parking space or garage — impressively (and brilliant for tight parking spots) the driver can get out of the car before activating and monitoring the process using the myAudi app on their smartphone. Very 007! Other optional add-ons include thing like handling-enhancing rear-wheel steering, a limited self-driving capability, and a full colour head-up display.

At five-metres nose-to-tail the A6 is undoubtedly big even if not quite as large as the limo-like A8 with which it has much in common. Its generous three-metre wheelbase benefits those in the rear the most: six-foot back seat passengers can sit behind other six-footers and still enjoy plenty of legroom. And that's in addition to decent shoulder and head room — almost as much as the fist-and-a-half of it available in the front.

Not only are the rear seats particularly comfy, but the rear cabin is a relaxing place to chill — advanced aerodynamics and sophisticated aeroacoustics keep the A6 peaceful, even at high speeds, for a genuine 'business class' experience. In fact, whatever your speed, from behind the wheel you can converse with all your passengers in a normal voice. And for when smaller children need to be carried, there are child seat anchors for both outer seats (as well as for the front passenger seat).

The A6's boot is big and of a regular shape that allows plenty to be packed into its 530 litres. Although this is a proper saloon the 60:40-split rear seatbacks do fold down — not absolutely flat, but flat enough to still be useful with a seamless floor. The wide centre section also folds down for long load-throughs and, should you want to tow, then the 40 TDI will oblige to the tune of a braked 2,000kg.

With highly competent rivals such as BMW's 5-series, the Jaguar XF, Mercedes E-Class, and Volvo's S90, the great looking A6 needs to be very good in every way. With its über-tech features and driver assists, urbane ambiance and commendably refined turbodiesel it's a clever, high-quality motor that easily makes the grade. And then some. ~ MotorBar