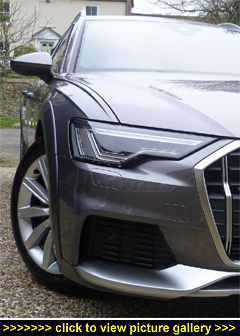 “SUVs have had it all their own way
for quite some time now, but not
everyone’s a fan and the alternative
— all-wheel drive, all-terrain estates —
are fighting back hard. Leading the
charge are the likes of Audi’s latest
A6 allroad...”

ESSENTIALLY A RUGGED ALL-TERRAIN version of Audi's executive lifestyle A6 Avant estate, the A6 allroad perfectly occupies the no-man's land between tough SUVs and classy upscale estates. So if you'd like an all-wheel drive vehicle that's seriously svelte grand tourer then the allroad's elegantly tailored lines will suit you down to the (all-terrain) ground.

When it comes to going off the beaten track you need torque; plenty of it. Audi gets this only too well and consequently serves it up in the A6 allroad by offering three muscular powerplants: a pair of V6 turbodiesels with either 227 or 282bhp and a TFSI petrol unit with a fiery 335bhp. Badged 45 TDI, the 'entry-level' model is a 3.0-litre, its 227bhp backed-up by 368lb ft. Top speed has been restricted to 155mph with 0-62mph despatched in a vigorous, and wheelspin-free, 6.7 seconds.

37.7mpg is the official combined cycle figure — actually rather good for a feisty off-road-capable estate with permanent all-wheel drive and automatic transmission. While owners of a car costing upwards of Ł53,000 are unlikely to lose any sleep worrying about the fuel economy, the bottom line is that they won't need to anyway — our hard-driven A6 allroad recorded an impressive 43.3mpg.

Cars are not unlike restaurants in that no matter how talented the chef (or engineers), if the atmosphere is not convivial then the meal suffers. In the A6 allroad's case, the ambiance is perfektionieren. Audi cabins have long been among the best of the best and the allroad's makes the ideal setting in which to enjoy all of the German technisch hidden under the skin.

Along with meticulous fit and finish and plush, upscale materials, the allroad is comprehensively fitted out but there is one extra worth fitting — the Ł1,500 Technology Pack. This buys you a lot of very desirable stuff including a three-screen set-up. Two full-colour HD touchscreens (10.1- and 8.6-inches) between them service all the infotainment, navigation and climate control systems; the third screen is Audi's Virtual Cockpit 12.3-inch full-colour digital instrument cluster. Taken together with these command and control screens, the logically arranged fascia and switchgear set-up reeks of Germanic order underscored by a cool minimalism.

Alongside the tastefully coordinated finishings there are every-which-way power-adjustable seats with three-stage heating and power lumbar control. Shapely, with effective bolstering, the chairs are, of course, leather-wrapped. Setting the ideal driving position is quick and easy and once done a two-memory recall for the driver's seat and mirror positions makes sharing driving duties even easier. Further boosting convenience for the driver is an automatic easy-entry feature.

Add to that a decent acreage of glass, loads of front legroom, masses of shoulder and elbow room and a fist of headroom plus long, comfy outer armrests on the doors and a generous centre armrest that's wide enough for two to socially share, and you have a car designed to make long journeys a genuine pleasure.

Comms are cutting-edge anchored by Audi's straightforward and intuitive MMI infotainment system. The driver's instrument screen is brilliantly multi-configurable — just tap the 'view' button on the multifunction steering wheel to instantly change the layout and info-mix: say, to minimise the dials with active 3D mapping that usefully gives a more zoomed-in view of what's on the upper fascia main touchscreen. Incidentally, a large digital speed readout is shown in the speedo's 'bull's-eye' as similarly is the currently active Drive select mode and autobox ratio in the rev-counter.

All the graphics and text are crystal clear and navigation offers destination entry via voice, digital keyboard or fingertip written input. Texts and emails can be read out to you while normal conversational commands enable you to manage the radio, climate system, SatNav, and even get answers (What's the weather going to be like in Hastings? Where is there a Japanese restaurant?). A DAB radio and Bluetooth are also on hand along with smartphone mirroring. WiFi smartphone charging is another of the goodies the Tech Pack adds. Naturally there's also an SOS button (emergency call service and roadside assistance) Just In Case.

In-cabin storage is as efficient and accommodating as the very generous boot at the opposite end of the allroad: big, long and deep bottle-holding door bins, a cubby for coins and small gadgets in the dash, siamesed cupholders (plus a mini-holster for the keyless entry and start key if it's not in your pocket or clasp bag) with a flip-over lid for when its off duty for drinks, a real-world size damped, lined and chillable glovebox and, under the armrest between the front seats, a deep lined segmented tray incorporating a bed for your smartphone (where it can also be charged wirelessly) plus a Sim, SD and two USB jacks.

The A6 allroad is comprehensively kitted-out with, in addition to the many items mentioned throughout the review, a Keyless-Go entry and start system, privacy glass, side and rear windows in heat-insulating glass, 2-zone electronic climate control, frameless auto-dimming rearview mirror, powerfolding (on-demand and auto on locking) heated door mirrors, all one-shot windows, cruise control, speed limiter, reversing camera with active guidance grid (a neat touch; you can tap the screen to trigger a wash of the camera lens) plus all-round sensors for proximity warnings as well as reversing, a powered tailgate, and 19-inch 10-spoke cast aluminium alloy wheels.

The allroad's huge boot won't baulk at carrying five people's luggage and neither will its rear cab flinch at seating three adults abreast; and most comfily. Space in the back is generous starting off with a fist of headroom and very supportive seats; backrests are set at a relaxing angle, there's loads of room for feet and enough knee room for some honest-to-goodness leg stretching. Dedicated climate air-vents in the B-pillars mean keeping hot or cold is never an issue whatever the weather.

The very wide and well-padded central armrest has pop-out cupholders (that adjust to various cup sizes) as well as a lidded and lined built-in tray plus there are proper overhead reading lights, two USB ports and 12v power, seatback pouches, and biggish door bins. Good views out can be enjoyed both to the side and the front which, along with the plush and refined ambiance, makes for a first class seat for those being driven.

All allroad models come with air suspension as standard, so the car can hunker down aeronautically when cruising or jack itself up to cross rutted mud-tracks or worse. For passengers, the best of its multiple Drive Select modes is undoubtedly Comfort, where the A6 palpably chills without incurring any handling penalties.

Nineteen-inches is the standard alloy rim size for the allroad in Sport trim and yet even rolling over worn and weathered city blacktop the ride quality is exceptionally good; even more so when you're escaping the smoke, where it ensures fluent and quiet mile-eating. In fact, thanks to the allroad's nicely-fettled balance and superb body control, only the champing-at-the-bit Dynamic mode — for times when pressing-on is a priority — noticeably switches to favour handling over ride. At which point you'll be getting from A to B far faster than if travelling in a tall-riding SUV.

While it might not pack the blistering acceleration of its über-quick sister, the 591bhp RS 6 estate, the V6 turbodiesel engine that lives in the A6 allroad's engine bay is no shrinking violet. Wearing 45 TDI badging, it's something of a dark horse. Stick the tiptronic autobox selector in Sport and choose Dynamic from the Drive Select menu and you'll discover that this 3.0-litre V6 has a passion for life — press on and you'll discover it's a bit of a humdinger with a growly soundtrack.

The allroad line-up all come in auto-only guise. That said, Audi's tiptronic autobox is everything it needs to be: smooth, fast-shifting, and it makes excellent use of its eight well stacked ratios whether you're pootling in traffic or getting to the church on time when it makes full use of the V6's 368lb ft of torque — you'll never be left short on poke whenever there's a need for it. Flicking from Drive to Sport requires just a light southerly tap on the selector lever to toggle between them; for more focused control you can make manual shifts via the lever or the steering wheel shift-paddles.

Despite more ground-clearance than a regular A6 estate and neatly-fitted black wheelarch protectors, the allroad's 'jacked up' look is subtly nuanced — the important thing is that it's underpinned by adaptive air suspension which adjusts the ride height automatically (or on demand — for instance; dropping down to its lowest setting for easier loading). The selection of ride settings covers the full spectrum from aerodynamically-favourable low for motorway work to its high-point for maximum ground clearance when venturing off the tarmac.

While its V6 bark is good, its (quattro) bite is better. Off-road ability is a given, courtesy of the quattro permanent all-wheel drive with its famed 'allroad' skills on slippery or snow-blanketed roads a definite advantage. Specific off-road tech assists include Hill Descent Control so it's not easily baulked by tricksy terrain. Usefully, you can also display off-road information such as the tilt angle and active ride height. The steering is fine and definitely singing from the same hymn sheet as the rest of the dynamics and the brakes are absolutely first-rate.

A powered boot is undeniably A Very Good Thing. Unlike some, it can be opened and closed from the driver's seat as well as from the key fob. Beyond it you'll find an impressively large 565-litre boot; long and wide with 'clean' sides, it benefits from repositionable lashing eyelets mounted on a sliding rail system. Use the remote levers to auto-fold the rear seats and you'll get a seamlessly-floored 1,680-litre loadbay. Loading is hassle-free thanks to the air suspension that lets you raise or lower the loading height (through 60mm) as best suits.

Adding to the ease of use is a roller-blind luggage cover that glides up the rear screen pillars as the tailgate rises. You'll find additional storage space in handy-sized trays beneath the boot floor as well as quite a bit of room in the built-in locker and netted pocket in the sidewalls. Sturdy bag hooks and stretchy luggage sets help keep loose cargo in-situ.

Technically split 60:40, the larger section incorporates a wide, full-depth fold-down section that in effect makes it a more versatile 40:20:40 arrangement — when folded down its upper surface sits perfectly level with the boot floor which makes heavy and bulky load-throughs that much simpler. Should you need even more space then the roof rails will support an additional 100kg of cargo.

While the boot will accommodate just about anything you want to toss in, from 14 carry-on cases to his 'n' hers mountain bikes, a key consideration for allroad customers is towing ability. No problem with that — the allroad's 2,500kg braked towing capacity is manly enough to cope with horse-boxes, speed boats and the like.

For many motorists the A6 allroad will be an enjoyable way to side-step the tall-riding SUV road-show. A classy, versatile and convincing all-wheel drive wagon with the ability to take its driver and passengers in comfort far from the blacktop, Audi's oh-so-desirable wagon is a great place to be a passenger and a great place to be a driver. ~ MotorBar