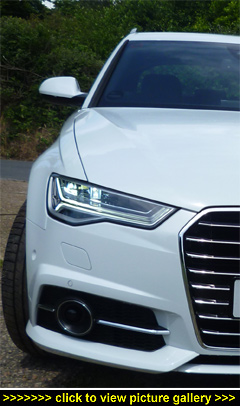 “Perceived wisdom tells you to ‘think
outside the box’. Sometimes, though,
thinking inside the box is the better
path. Audi have thought long and
hard inside the sleek ‘box’ that’s the
A6 estate; about how to make this
already very good car even better.
And now they have!”

FROM OUTSIDE IT'S HARD TO SPOT the minor makeover (hint: more purposeful grille, meaner-looking LED headlight units and, at the tail, LED light clusters above a neat diffuser and stylish exhaust finishers) but there's no denying that the A6 Avant now looks even more wind-cheatingly lithe. It's not all about looks, though, which is why the most significant clue is the badging — note the 'Ultra' on the tailgate.

This refers to the Vorsprung durch Technik brand's ability to squeeze every last mile out of a gallon of fuel while at the same time keeping emissions as clean as can be. Audi reserves its 'Ultra' badge for its most frugal A3, A4, A5, A7 Sportback and TT models, as well as the A6, one of which has just achieved a new Guinness World Records title by driving to 14 countries on a single tank of fuel. Yes, really.

The unmodified Audi A6 TDI Ultra saloon chosen for the RAC-overseen challenge comfortably exceeded its official 67.3mpg potential by averaging a remarkable 75.9mpg and completing a total of 1,158.9 miles without the need for a fuel-stop!

For the record it was driven almost non-stop for nearly 28 hours from the Netherlands to Hungary, passing through Belgium, Luxembourg, France, Switzerland, Lichtenstein, Austria, Germany, Italy, Slovenia, Croatia, Bosnia and Serbia. And it wasn't all plain sailing: the two-driver team faced numerous challenges including diversions for both heavy traffic due to an accident and a closed tunnel which led to an unplanned mountain detour.

If you fancy trying this at home you could theoretically swallow whole the well known A3, A4, A5, A6, A7 and A8 arterial roads, again without a single fuel stop. If laid end-to-end, these key trunk roads, which sprawl southwards and westwards from the centre of London towards Southampton and Bristol, and radiate as far north as Glasgow, would stretch for 933 miles.

Audi really knows how to 'do' interiors — just a glance at the A6's tasteful, beautifully trimmed and refined cabin readily confirms that. Settle into one of the big, comfy leather-upholstered 'chairs' and you immediately feel at ease. It's a feeling that stays with you throughout your journey, however long or short.

Generous personal space for four adults can be taken for granted — even three in the back is comfortably do-able — if, that is, the 'interloper' has a silver tongue and can persuade those already lounging in the outer rear seats to give up the centre armrest… Otherwise passenger duties in the rear cabin are delightfully simple: stretch out and relax, untroubled by the outside world.

Making sure the ambiance is not disturbed are a double-glazed front screen and side windows and triple door seals. Four-zone climate control ensures that everybody travels at their own preferred temperature.

The driver enjoys fine visibility and stacks of powered seat adjustment, and cannot fail to set the perfect position. Particularly useful is the seat button used to adjust the massage function, lumbar support, side cushions and thigh support; turn its outer ring and all the options appear on the MMI display from where you select. It's foolproof and guarantees no more fumbling in the dark.

And the so-multifunction (including a cue voice control button and a 'favourite' function) steering wheel is a pleasure to use thanks to its perforated leather work areas. As well as from the wheel, many MMI functions can conveniently be operated by voice. Paddle-shifters make light work of manual gear shifting if you feel the need to assert yourself. All of which contributes to making driving this large estate car an ultra relaxing experience.

Kit is well-specced and includes all the expected stuff from one-shot auto up/down windows to a central infotainment screen display with impeccable graphics that pops-up out of the fascia when the Start Engine button is pressed (you can retract it out of sight any time you prefer).

Helpfully, a large section of the display ahead of the driver switches automatically to show you the navigation map (or on-board computer information) as appropriate — safer in heavy traffic conditions. As too is the digital speed read-out and the head-up display that projects road speed, navigation graphics, and adaptive cruise control distance settings onto the windscreen.

Speed limit signs can also be displayed on the driver's info screen or in the top left corner of the map. Another liked feature was the all-weather lights function that prevents you being dazzled by your own lights (when driving along a wet road, for instance). Park Assist 'robot' parking is optional but the standard-fit rear parking camera which uses the larger central screen to help you manoeuvre, supported by acoustic nose and tail sensors, has pretty much got things covered.

Worthwhile options include the Matrix LED headlight system — this detects oncoming vehicles and automatically adjusts the LED light pattern to avoid dazzling other drivers; the benefit is that they maximise the light thrown ahead of the A6 to make sure you always have the best spread of light ahead of you at night and in poor weather. A night vision camera that can 'see' and alert you to the presence of otherwise unseen pedestrians and large animals (deer, etc) is also optional.

The 2.0-litre TDI Ultra installed in the engine bay might be lean but it's also fairly mean — 187bhp is a respectable amount even in a sizeable wagon like the A6. The other side of the power coin is 295lb ft of torque that peaks from 1,750rpm, ensuring that the Ultra is most certainly no lazybones when your right foot calls for some get up and go.

A passenger or driver who didn't know the car would say that it doesn't feel anything like an 'eco' model. And it most certainly doesn't. For the record this A6 estate will run to 140mph and deals with the benchmark 0-62mph dash in a crisp 8.5 seconds.

Designed to make light of hauling serious weight, either in the cabin or behind it, the A6 Avant is well-fettled in the handling department — the sports suspension lowers the ride height for tight and predictable 'placeability'. Allied to the decent supply of bhp and torque it means there's no danger of you being bored behind the wheel.

Audi's 'Drive Select' provides a variety of driving modes to suit all moods ranging from 'soft' to 'sharp' — choose, on the fly, from Auto, Comfort, Dynamic and the driver's personal pick 'n' mix Individual. Make no mistake, this lifestyle+ wagon can still serve up a sporty drive despite its five-metre length.

It's also reassuringly safe and in front-wheel drive spec traction and stability are good and there's no noticeable understeer penalty when pressing on through bends. The steering is nicely weighted and this too can be adjusted to suit via Drive Select. Hefty disc brakes all-round deliver strong, fuss-free stopping whether you're running fully laden or just going solo.

Our test car was rolling on meaty 245/45 rubber but the ride on the 18-inchers was still pleasantly compliant and couldn't dampen the fine time we had on our demanding test route along Kent and Surrey's not always well cared for B-roads.

The boot, as you would be expecting, is a pretty humongous 565 litres. Access is via a quick-acting powered rear tailgate and a low sill makes for easy loading. If you need the whole caboose then folding down the rear seats turns the boot into an 1,680-litre cargo bay with a very long and seamless floor. A sliding rail luggage system along with ample nets and fastenings makes securing your load something that goes without a hitch every time.

Our demanding test route takes in a mixed bag of roads through Kent and Surrey and after a full week behind the wheel we chalked up an overall average over 650 miles of 47.7 against the official 62.8mpg.

Were we disappointed? Not in the least. As Audi's Guinness record proves, less eager drivers than us can, and most likely will, do better. We think 55mpg is in reach for most. But because the driving experience is so cosseting, who cares if you don't set a record every time you go out!

Also due a share of the credit for this Avant's ultra-economy is the twin-clutch S tronic autobox which makes the very best of its seven gears to benefit economy or build speed quickly; either way it's a super-smooth shifter.

But it does get a little help along the way from Audi's technically-smart 'coasting' function that saves a drop more fuel every time your right foot comes off the accelerator by letting the engine freewheel — quite safely — in neutral. To enable this the driver needs to select the Efficiency setting from the Drive Select menu. You should also know that the S tronic-equipped Avant drinks less fuel and exhales less CO2 than one with a manual 'box.

Another well-considered touch — particularly appreciated by the driver of the vehicle behind you — is that you don't need to keep your foot on the brake to stop the engine restarting whenever the automatic stop-start is active so when, at night or in the wet, you're waiting for the traffic lights to change, your brake lights won't dazzle the driver behind. Make new friends — drive an Audi!

A capacious quality estate, the A6 Avant ticks all the right boxes. It's prestigious but not in the least showy, and it's a premium place to enjoy a long drive whether you're just along for the ride or behind the wheel. Like across fourteen countries, perhaps?! — MotorBar