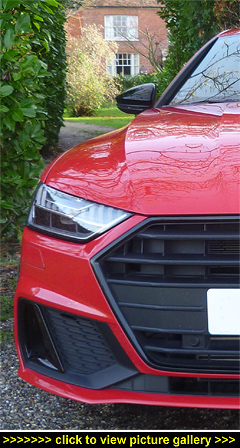 “Do you define your car? Or does it
define you? Like it or not, for ninety-
nine point nine percent of us the
answer is always the latter. So what
does driving Audi’s latest A7 —
a jaunty five-door sportback that
skilfully blends saloon and coupe
styling — say about you?”

ASK NOT WHAT you can do for your car but what it can do for you. And if it's an A7 Sportback as reviewed here, you might be pleasantly surprised… A big clue is in the small 'e' trailing the 'I' of the 55 TFSI badge on its boot — indicating that this particular A7 is fitted with Audi's plug-in hybrid powertrain.

As such it offers its driver a choice of three driving modes: Hybrid, which maximises the car's use of combustion and electric-only drive to keep fuel consumption as low as possible, letting the system automatically juggle electric and petrol, or a mix of both, for optimum efficiency

Iin electric-only EV mode the A7 offers up to 25 miles of emissions-free motoring although pressing harder on the accelerator will instantly engage the petrol engine for an extra power boost; Battery Hold mode ring-fences the battery pack's current charge for use later in your journey, say when entering a city. Incidentally, a full recharge takes two-and-a-half hours using a wall-charger but even if you're stuck with a conventional household socket an overnight recovery to full power is not a problem. Other fuel-maximising features include Intelligent Coasting using Audi's Predictive Efficiency Assist.

Using the SatNav data to 'sense' conditions ahead that may improve economy — for instance; coasting up to roundabout or traffic lights, descending a hill, cutting speed prior to entering a lower speed limit, catching up with slower vehicles ahead, and upcoming traffic conditions, etc — Predictive Efficiency Assist will prompt you to lift off (you'll feel a gentle vibration in the throttle pedal) to ensure the most efficient driving for each situation. All truly impressive stuff; but not in any way intimidating.

A regenerative braking system is fitted to the front axle and can generate up to 80kW of electrical energy to top up the battery pack during deceleration and, additionally, the electric motor also harvests energy during braking. As ultra-advanced as its tech is, the TFSI e is nonetheless easy to use. Just drive and enjoy your reduced carbon footprint!

With 362bhp on tap there's no hanging around when needs must. For the record, the total system torque (turboed four-cylinder petrol engine plus gearbox-mounted electric motor) generates a muscular 369lb ft. Flex your right foot and the electric motor whooshes the A7 off the line; press harder and it's joined by the 249bhp/273lb ft 2.0-litre petrol engine to provide additional thrust, taking you to 62mph in a seamlessly rapid 5.7 seconds and on to an electronically-limited 155mph.

While it's undeniably a big beastie it masks its size well and the streamlined coupe body is as aerodynamic as it looks. There's even a very subtle active spoiler built into the bootlid. However, just because it's a five-door coupe with a steeply sloping roofline doesn't automatically mean a headroom penalty. A tall driver and equally tall wingman will enjoy a fist+ of it along with plenty of surrounding personal space. Once aboard, first impressions are of a sumptuous cabin packed full of supple high-grade leather upholstery that's been stitched together with meticulous care, and the two central touchscreens along with the impressive Virtual Cockpit digital instrument display directly ahead of the driver.

The uppermost ten-inch central touchscreen is a where your finger goes for the integrated SatNav, smartphone mirroring (Apple CarPlay/Android Auto), safety, infotainment, and multiple entertainment options; the 8.6-inch screen below it is reserved for the full operation of the climate system and the heated seats.

Both touchscreens have crystal clear graphics and the menus are quick and user-friendly; better still, each finger tap generates a fleeting physical pulse along with an audible 'click' to confirm your choice is accepted — and, just like your smartphone, the more you use it the slicker it is. Even the climate touchscreen panel is customisable plus there's plenty of 'crossover' between the main screen and the steering wheel's buttons so you can operate the system using whatever best fits in the moment.

The Virtual Cockpit's 12.3-inch instrument panel display will also show active mapping if you choose and can, via the handy steering-wheel buttons, be easily customised (there are eight core layouts) for appearance and content so you only see exactly what you want to see.

Like us, you may prefer to reserve the main touchscreen for infotainment and entertainment and keep the active mapping right in front of you on the digital instrument panel and cycle through other functions (navigation, driving data, radio, media, and phone) as and when it suits. Sensibly, the roadspeed is clearly shown at all times as a digital readout, as too is your active gear and driving mode as well as navigation prompts; when you're taking orders from the SatNav the thumbwheel on the left-hand spoke lets you quickly zoom in and out.

Comfort-wise the almost minimalist-styled cabin is a dishy place to hang out. Acres of brushed satin ally, satin chrome and high-gloss piano black filleting underscore the top-notch trim and materials — this A7 could easily be a flagship model (although that status is reserved for the A8). While for some the cutting-edge tech will be the prize, for others it will be the seats and driving position that cut it.

And they won't be disappointed. The fab seats are well-padded, shapely and comfy with very effective bolstering; both have full electric operation with 4-way powered lumbar along with manually extending base cushions. The 3-stage heating is fast acting and the driver gains a two-setting memory recall. There's also masses of elbow room between the front seats. Crucially, the driver enjoys an uninterrupted view down the long, wide, profiled bonnet making placing the five-metre A7 a doddle.

There's more tactile pleasure from the sporty, flat-bottomed, S line steering wheel, its rim wrapped in great-to-hold perforated leather; all the multifunction buttons are beautifully logical. A Start-Stop engine button saves twisting a key before you get away and Park is engaged using a dedicated button in the selector knob, leaving you with just R, N, D/S; the Manual setting +/- is a flick to the left and there are paddle-shifters on the wheel spokes. Lightly pulling the lever back from Drive will immediately engage Sport (pull it again and you'll be instantly back in D). Simplissime!

A brace of six-footers can settle back in the supportive rear seats with backrests set at a relaxing angle, happily sharing the wide drop-down central armrest with built-in cupholders (and a handy lidded storage tray) with space above their heads, generous room for knees and feet, and indulge in a spot of stretching on longer trips. The rear cab's ambiance matches that found in the front, with high-grade trimmings and a dual-zone climate touchscreen to maintain travellers at the perfect temperature.

Getting in and out is easy (the rear doors' windows are frameless like the fronts — and very handy if you need to exit in a tight parking bay). The long, deep side windows afford expansive views out despite the dark tinted rear privacy glass. And while three side-by-side is doable, two will travel in decidedly more splendour.

With eye-catching 255/40 twenty-inch alloys you might expect the A7's ride comfort to take a hit. It doesn't. Audi's Drive Select system is standard-fit and it offers a Comfort setting (also on the menu are Efficiency, Auto, Dynamic, and Individual) that serves up enough fluency and road manners to be a car your passengers will be content to ride around in, particularly on motorways where they can chill out in the serene rear cockpit as the A7 wafts along, the outside hubbub muted and seemingly a world away. That noted, there's enough compliance not to degrade the handling, so the driver's seat remains an equally rewarding place to be.

Green-hued hybrid it may be but that doesn't mean there isn't plenty of power on hand whenever hard acceleration or a swift overtake is needed. Given its head, it's pokey from low-down with more than an ample sufficiency mid-range to up the pace without breaking a sweat. Driven in an everyday manner it serves up an effortless and laid-back pace that blurs the miles.

Further enhancing its refinement, the Intelligent Coasting feature lets it switch off the engine and declutch the transmission between 34mph and 99mph to maximise fuel consumption. We mostly left our A7's tech to get on with it and, even when we were unable to charge the battery regularly, were still rewarded with an impressive 48.9mpg.

Although the ultra quattro system favours front-wheel drive in the interests of efficiency whenever it can, that doesn't mean the A7 isn't grippy — the fact that all-wheel drive max-traction is restored quicker than the blink of an eye when appropriate means the A7 is a dynamic as any other quattro equipped Audi. Be in no doubt: there are huge grip reserves. The accurate steering is a tad more grand tourer than out-and-out sports car but, you know, that's just fine, because it's nicely in-sync with the rest of the car's all-weather roadholding abilities.

Body lean is well managed as it squats down and hangs on through the twisties, eliciting a satisfied smile from the driver whenever the blacktop switches from arrow-straight to corkscrew. Its USP, and its real strength, is that it's equally rewarding if you just give it its head and savour its relaxed, mile-eating demeanour. Job done!

That sloping tail gives the impression that the A7's luggage capacity may have been clipped in favour of kerb appeal. Not so. Whizz open the powered hatchback-style bootlid and you'll find a regular shaped boot with 380 litres of carrying capacity. It would be more but the battery pack has to go somewhere, and under the floor is where it lives.

If you need to load to the glass the rigid rear shelf-cum-luggage cover can easily be slid out and stored in the boot. We managed to stash enough large carry-on suitcases for four adults beneath the parcel shelf — and Audi say two loaded golf bags will fit.

Fold the split rear seatbacks and you'll have a seamless loadbay that will swallow 1,235 litres. The fast-acting (and closing, too) bootlid can also be operated from the driver's seat which is a boon, particularly in wet weather. Extending the better than expected versatility is a large '20' section load-through panel which facilitates quite bulky, longer items. The usual tie-downs, sturdy pop-out bag hooks and elasticated nets to keep your cargo shipshape are all included.

The A7 Sportback cuts a debonair dash. Packed with beautifully-presented and easy-to-grasp high-tech and a superbly fettled cabin, and sporting an efficient hybrid powertrain, it's a rewarding and refined express. But what does it say about you? That you're Cool, Classy, Compelling and Credible, no less. Anyone should be able to live with that! ~ MotorBar