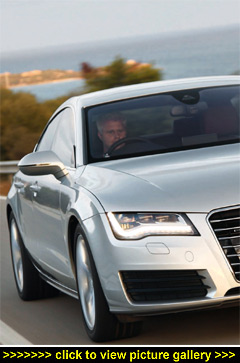 “Audi is going Sportback-mad at
the moment. We’ve only just seen the
launch of the S5 Sportback (the
sporty version of the A5 Sportback)
and now Audi is launching yet
another new model — the bigger A7
Sportback...”

THINK OF THIS NEWCOMER as halfway between an A6 and an A8; and halfway between a practical hatchback and a sleek coupe. Audi's stab at the big four-door coupe format may be a little late to the party but arguably it's a much more successful attempt than BMW's bloated 5 Series GT. Probably its closest competitors are the Mercedes CLS and Jaguar XF.

The new A7 Sportback is a big, striking car. It's longer and wider than the Audi A6 but also lower so it really does look imposing on the road.

It's got a lot going for it stylistically, from the swoopy nose to the angular haunches and dramatic fastback roofline. From some angles, there are even shades of Aston Martin Lagonda in there…

I'm going to edge out on a slight tangent for a moment to make an interesting comparison between the petrol-engined A7 Sportback and the S5 Sportback.

The biggest difference is interior space. While the head on my 5ft 8in frame hits the rear headlining in the S5 Sportback, there's easily enough room for a six-footer in the back of th

Audi is basically offering three six-cylinder engines: 2.8 FSI petrol, 3.0 TFSI petrol and 3.0 TDI diesel. Because of the tax situation, almost no-one is going to buy a petrol-powered A7 (sales are predicted to barely make triple figures in 2011). The diesels are the ones everyone will choose — about 3,000 of them in 2011 in the UK.

The 241bhp 3.0 TDI is a fantastic unit, no question about it — it's refined, very rev-happy for a diesel and bursting with torque. But I actually prefer the 3.0 TFSI petrol version. It's got much more character, a great sound and more raw speed. If you can afford the running costs and the extra tax, it's a great choice.

There's no manual gearbox option for the A7, just Multitronic auto or S tronic dual-clutch transmissions. The seven-speed S tronic system is as brilliant in the A7 as any other Audi: it changes up and down with uncanny instantaneousness and its tiptronic mode (using the shift paddles behind the steering wheel) is superb for press-on driving.

You can buy a front-drive-only A7 diesel with less power if you wish but the rest of the A7 range has quattro all-wheel drive fitted. Quattro versions apportion torque sixty per cent to the rear wheels and 40% to the front ones, which means the feel is much more like a rear-drive car (as are all of the A7's rivals). Yet quattro makes the car extremely grippy and very forgiving. For an even sportier feel, the optional sport differential can transfer torque between each of the rear wheels as well.

It's just about possible to get the A7 out of shape if you bowl into a corner too quickly; the back end will start to slide before the stability control gently intervenes. Despite its bulk, the A7 is great to hustle along B-roads and the fun feel is also helped by direct and well-weighted steering. Yet the A7 is also very refined, a superb cruising machine which rides with convincing comfort.

Cabin ambience is another strong suit. Audi has notched a new high with the A7 in terms of design, feel and finish. The seats are superb and ultra-adjustable, the driving position is impeccable and the quality of the fittings and trim is beyond reproach. There's also no better SatNav system than the A7's, which now boasts Google Earth imagery — it's amazing to see the scenery flashin

My only gripe really is how expensive a fully specced A7 can get. Audi's range of tech-fest options will have you salivating but the prices are enough to make your eyes water too. For instance, the Bang & Olufsen 1200W audio system is a blistering bit of kit — and more powerful than a mid-sized PA — but is it really worth Ł6,300?

The head-up display that beams info on to the windscreen will make you feel like a fighter pilot but you'll need to sell the 'plane to pay the Ł1,450 it costs. Night vision is another great 'black-ops' toy, but its Ł2,100 price tag and questionable safety benefits surely make it a pure extravagance.

And extravagant the A7 certainly can be: one of the stuffed-with-kit test cars I drove would have cost you all of Ł72,990. To put that into perspective, you can buy a Porsche Panamera for that. — Chris Rees