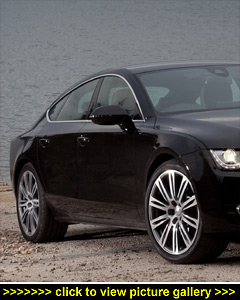 “The A7 Sportback sits between
the A6 executive saloon and the
A8 luxury saloon while offering
the practicality of an Avant estate,
the prestige and comfort of a saloon
and the elegance of a four-door
coupe...”

AUDI'S MODEL EXPANSION programme continues onwards and upwards and, despite the economic climate, it's not losing pace. With the supermini-sized A1 hatchbacks recently going on sale, attention has turned to filling another gap in their mainstream passenger car model line-up — slotting into the Audi range in the new year is the all-new sportback-styled A7.

Audi expects to sell 3,250 A7s in the UK in 2011, almost half of them bought by 'conquest' customers. Deliveries begin from 8 January. Prices range from Ł43,755 to Ł49,860 but dipping into the must-have options list for features such as park assist, energy saving LED headlights, head-up display and air suspension can add at least Ł15,000 to those prices. On-board Google maps access, an Audi first, is another option. Early adopters have, on average, added around Ł8,000 worth of options to their new A7s although this figure will reduce to around Ł2,000 on average in the longer term.

The A7 Sportback uses a new platform, one that will also be used for the new Audi A6 range due here next April. The A7 has a lightweight aluminium and steel composite bodyshell to help reduce fuel consumption and lower CO2 emission in conjunction with the latest fuel-efficient engines and 'smart' low-friction transmissions. The advanced technology powertrains introduced recently in the A8 have now cascaded down to the A7 Sportback, and will also feature in the forthcoming A6.

The A7 design is a long, low and wide bodyshell with a steeply, forward-raked rear tailgate with a retractable rear spoiler similar to that used on Audi's TT models. Audi say the A7 offers the load and passenger carrying functionality of an Avant (estate), the prestige, comfort and space of an executive saloon yet with the side profile elegance of a four-door coupe. It will sell in a niche premium-executive saloon/coupe sector against the Mercedes-Benz CLS, which created this design concept, and the BMW 5 Series GT.

Initially the A7 Sportback offers a choice of four FSI petrol and TDI diesel engines providing pulling power and polished performance as well as low CO2 emissions and improved fuel economy (helped by the lightweight bodyshell) and all have a Start-Stop function. The naturally aspirated 204PS 2.8-litre FSI and supercharged 300PS 3.0-litre TFSI petrol units are complemented by two versions (204PS and 245PS) of the acclaimed 3.0-litre TDI. Three of the four engines are combined with quattro all-wheel drive — only the 204PS 3.0-litre TDI unit has front-wheel drive.

For the first time in Audi models at this level, these powerplants will be combined with the rapid-shifting, seven-speed S tronic twin-clutch sports transmission wherever quattro four-wheel drive is installed. The quattro all-wheel drive system appears in its latest generation form with a 40:60 rear bias and featuring the crown gear differential first seen in the RS 5, which can vary torque distribution between the front and rear axles even more widely for even greater agility.

The Audi Drive Select adaptive dynamics system is fitted as standard to all models, enabling the driver to fine-tune steering weighting, throttle response and transmission shift points at the touch of a button. The keenest performance enthusiasts will want to specify the optional quattro sport differential enabling torque transfer between the rear wheels.

With the added benefit of new engine load-reducing electromechanical power steering, and the fuel-sparing, torque converter-free Audi Multitronic continuously variable automatic transmission fitted as standard to the front-wheel drive version, fuel economy of up to 53.3mpg — and CO2 of as little as 139g/km — is possible from the 204PS 3.0 TDI.

Economy can also be further optimized when the standard satellite navigation system is upgraded to MMI navigation plus: the detailed route data can be used to factor corners into the automatic transmission's shift strategy and so avoid unnecessary, fuel-sapping gear changes. The optional adaptive cruise control and adaptive light, swivelling cornering light systems are also influenced by feedback from the navigation unit.

SE and S line levels of specification are available and the 245PS 3.0-litre TDI engine with quattro all-wheel drive and S tronic transmission (as reviewed here) will take 70 per cent of UK sales. With SE trim and equipment this model costs Ł47,200 but my test car was loaded with extras and came out with a total price, including the new 20% VAT, of Ł63,325 — breathtaking in all respects.

But with that power and a huge 368lb ft of torque from just 1,400rpm driving through the seven-speed, twin-clutch auto gearbox, it is a dream combination: instant responses, yet docile when required; and very quiet and fuel efficient.

Officially this model will return 47.1mpg in the Combined Cycle. After some hard driving — because it was such a joy to drive — covering winding A-roads plus some stop/start town traffic, my test car returned 38.2mpg during the recent freezing conditions. The CO2 emissions figure of 158g/km is impressively low and incurs an affordable Ł155 annual road tax bill. Company car drivers will pay 23 per cent Benefit-in-Kind tax.

Of all the extras on my test car, I was impressed most with the latest adaptive air suspension option. It costs Ł2,000 and will not be the most popular extra but in reality it offers the best additional quality that can be added to the A7's impeccable driving performance.

There are numerous settings to suit personal choice — the best arrangement for me was to put it in its Comfort mode for a first class ride, then select the Individual mode for the steering to sharpen up the dull steering response and which in Auto mode gives little feedback.

The benefit of much of the add-on technology is that this Audi can be tailored exactly to the driver's requirements, and at this sort of price that is indeed a real bonus.

The A7's interior matches the stunning exterior styling. Naturally it is beautifully laid out and no facility or function is missing, ranging from leather upholstery to the split/folding two rear seats to the mobile phone preparation, navigation system and DAB digital radio with 10 speakers and a sub-woofer. It's all there.

While the 'coupe' design limits rear seat headroom as well as boot space (there's still between 535 and 1,390 litres) and too much of the 'might-like' technology costs extra, the upside is a stunning road presence, comfortable ride, refined power delivery and handling and an impeccable interior of the highest quality.

In short the A7 is stunning to look at, impressive to drive as a GT model, comfortable, versatile for load carrying, fuel- and CO2-frugal and, of course, pricey. — David Miles