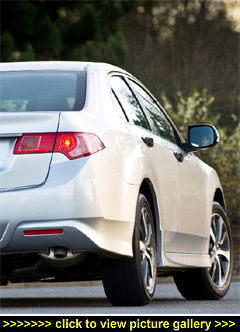 “Cleaner and sharper is how Honda
describes their refreshed Accord
range of saloons and Tourer estates,
due to arrive in the UK from 1 July...”

NOWHERE IN THE ACCORD'S PR BLURB can I find the words 'more fun' or 'more pride of ownership' and those are something which would definitely improve the desirability of Accords.

Don't get me wrong because the Accord (launched in 2007) is a good, well-engineered and reliable product but it fails to shine; and it fails to make would-be customers want to own one.

Honda's sales expectations speak for themselves: just 2,000 Accord Saloons and 1,000 Tourers being the UK target — ninety per cent of orders will be for the 2.2-litre diesel models.

To succeed in the diminishing upper medium segment, the Accord faces some seriously stiff competition from the sales-leading Vauxhall Insignia, the stalwart Ford Mondeo, the much-improved new Volkswagen Passat and the Toyota Avensis, to name but a few.

But with headline starter prices of Ł21,695 for the 2.0-litre i-VTEC ES saloon and Ł23,050 for the Tourer version, it would seem that the latest Accords do have price on their side. However, the fully equipped top-of-the-range Type S model with the 177bhp version of the 2.2-litre i-DTEC diesel engine costs Ł29,400 for the saloon and Ł30,755 for the Tourer. And that is getting into premium brand territory; competing against Audi, BMW, Jaguar and Mercedes-Benz.

But for any 'Steady Eddie' would-be Accord owner, the highlights of the revised models unveiled at the recent Geneva Motor Show are lower CO2 emissions and better fuel economy to offset the continuous rise in fuel and taxation.

Honda engineers have implemented a host of underbody aerodynamic aids, including a larger front air dam and underfloor and rear subframe covers to smooth airflow and reduce drag.

Low friction wheel bearings are also fitted and Accords equipped with the automatic transmission benefit from reduced frictional losses in the gearbox and optimised ratios to help further improve economy and emissions.

Honda's refined 2.2-litre i-DTEC mainstream 147bhp diesel unit has also received attention to reduce internal frictional losses. These revisions have resulted in a 9g/km drop in CO2 emissions for the six-speed manual saloon — it now achieves a sub-140g/km figure so road tax is Ł115 at the new rates announced in the recent Budget. The new BIK company car tax is 20 per cent.

There is also an 11g/km reduction (to under 160g/km) for the automatic variant — road tax is Ł165 and BIK tax 23 per cent. Honda says all of these improvements have been achieved without affecting the power and has improved refinement.

Revised specification levels are ES, ES GT, EX and Type S with the 2.2-litre i-DTEC ES GT manual saloon being the mainstay version. Costing Ł24,695, this is the model I had a brief test drive in prior to them going on sale in July this year.

A higher level of standard equipment right across the range is aimed at the core business driver but it will equally appeal to retail buyers. The specification now includes 17-inch alloy wheels, Bluetooth, MP3/iPod connectivity, cruise control, vehicle stability assist, dual-zone climate control and a full set of airbags.

The GT specification, over the base ES level, adds half-leather upholstery, alloy pedals, front footwell lighting, key fob-operated windows, red instrument lighting, body-styling kit (front and rear bumpers and side sills) and front fog lights. A major omission, given the size and price of this car, were front and rear parking sensors.

Overall the refresh inside and out should give the latest Accords a mid-life sales boost. It looks sharper and the handling and ride comfort is much better thanks to the European upgrades to the suspension — even with the new 17-inch wheels. The engine sounds quieter and smoother due to the latest technical upgrades and extra sound-proofing has given the interior a relaxed atmosphere. The revised cabin layout looks good although the instruments and controls appear daunting because there are so many of them and they're not logically laid out — 'less is more' might be an idea.

The four-cylinder, all-aluminium, common rail direct injection turbodiesel unit seems more refined now the frictions and vibrations are reduced and with 147bhp of power and 258lb ft of torque from 2,000rpm, it is responsive, flexible at low speeds and plenty fast enough on traffic-free roads. Top speed is 132mph and zero to 62mph takes 9.5 seconds.

The six-speed manual transmission deserves a special mention: it's slick and precise to use with the gear ratios very well chosen to make the best use of the torque available. The car will quite happily trundle along in fifth gear at walking pace in traffic without fuss or stalling but slip it down into fourth and the car will pull away easily back up to speed.

The latest Accord is improved, smart looking, of high quality, competent and well made but with discounts in this segment being plentiful its price looks costly, parking sensors aren't fitted as standard and it lacks that 'pride of ownership' factor. But while it still might not totally be a fun car to own, it is nonetheless sensible and good to drive. — David Miles