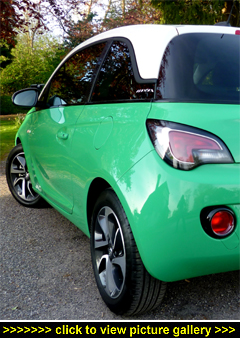 “At heart Vauxhall’s Adam is a City
Car-sized three-door hatchback
that offers a more individualistic
small car experience than the Corsa
and Viva...”

WHILE IT MIGHT BE A 'CITY' CAR, the Adam can go a lot faster than the 20 or 30mph that's the urban max — top speed is 121mph. More useful in traffic is its 'nipability', underscored by a zero to 60mph time of 9.9 seconds.

Acknowledged by many as Vauxhall's rival to the MINI and Fiat 500 — two extremely popular cars that owe a substantial part of their appeal to the degree to which their owners can customise them. Now the Adam Unlimited has trumped them both by offering options that take automotive personalisation to a new high.

Thanks to the Adam's options boxes, today's image-conscious motorists have never had it so good when it comes to putting their personal 'stamp' on their car. In the case of the just-introduced (April 2016) Unlimited versions there are countless options to tick enabling you to make almost every part of it unique to you: 19 exterior and 7 roof and mirror skin colours, 25 alloy wheel designs, plus a number of external and internal trims and foils.

You can also add hi-tech gear including the likes of CarPlay, Android Auto phone projection and in-car wireless charging for mobile devices (the user only needs to place the device on the integrated charger tray in the centre console in front of the gear stick and wireless charging starts automatically).

With all options available in virtually any combination, Adam owners can be sure of driving a car that is not just uniquely personal to them but that's, literally, one in a million.

Adding comprehensive connectivity is Intellilink (Ł275),Vauxhall's award-winning smartphone and tablet connectivity/infotainment technology, and OnStar (Ł395), Vauxhall's innovative personal connectivity and service assistant that enables stable use of all internet-based services and includes a WiFi hotspot using 4G for up to seven devices.

The latest generation of Vauxhall's IntelliLink system is now even more functional than before — using the seven-inch touchscreen with connectivity options via USB and Bluetooth for audio streaming and viewing photographs, videos and films or making a telephone call via the hands-free module, the new IntelliLink integrates the world of smartphones via Apple CarPlay and Android Auto into the vehicle.

Drivers and passengers simply need devices from Android 5.0 Lollipop and Apple iOS 7.1 (from iPhone 5). It is fast and easy: simply connect the iPhone or Android smartphone via USB, and the on-board infotainment technology immediately recognises the systems and adapts the smartphone interface to the touchscreen.

Drivers can make calls, send and receive messages and listen to music right from the touchscreen or by voice via Siri. Android Auto is built around Google Maps, Google Now and the ability to talk to Google, as well as a growing audio and messaging app ecosystem.

The Google Maps and Apple Maps navigation apps are easy to use: updates are automatically downloaded onto the phone by the respective provider, so the driver always has the latest map data online. Changing the size of the map section on Android Auto is simply done by touching the screen and pinching or zooming accordingly.

Another advantage is that smartphone-based systems provide information on traffic conditions in real-time along with possible points of interest — including the complete address, opening hours and further details. And when a text message from services such as WhatsApp or Skype is received, Android users can have it read out loud to them so they can keep their eyes on the road and their hands on the wheel.

Launched just three years ago the Adam — which, size-wise, sits below the recently-added Viva and the latest Corsa ranges — has been a notable success for Vauxhall. And why wouldn't it? It's funky, a good-looker, distinctively styled in a pleasingly non-bling way, has an appealing and attractive cabin and offers an extensive range of personalisation options. And if you opt for the new 1.0-litre turbocharged three-cylinder engine, you'll be more than pleasantly surprised.

First, then, that 1.0-litre engine. A direct-injection petrol-drinker, it's a surprisingly smooth and lively little 998cc unit that punches out an enthusiastic 113bhp backed up by a useful 125lb ft of torque from 1,800 through to 4,500rpm which delivers flexibility in the low- and mid-range range and allows it to pick-up meaningfully in the higher gears. Not that changing down is a problem because the six-speed manual 'box comes with a slick, clean change action. It's also, another big 'plus', quiet at the legal limit.

Despite its peppiness it will, officially, return 57.6mpg in the Combined Cycle. These lab-produced figures rarely tell the real story and on test over a hard-driven week 'our' Adam managed a not-to-be-sneezed-at 47.4mpg — we'd expect less pressurised drivers to break through the 50mpg barrier.

Fitted with a Stop/Start system to maximise economy and with emissions of 112g/km, the 1.0-litre Adam is pretty cheap to run with no road tax to pay for the first year and then only Ł30 annually.

Handling-wise it's a neat performer thanks to its suspension being specifically fettled to suit the UK's roads (while it dictates far too much of our everyday lives, even the bombastic EU doesn't have the power to make our roads billiard table-smooth like those in Germany).

Power is put down through the front wheels and front-end grip is reassuring, the Adam steering faithfully with decent feedback so corners can be cut though tidily.

The ride's pretty good too; after encountering some rougher metropolitan blacktop it's obvious that Vauxhall's engineers have set up the Adam for a comfortable ride as opposed to hot-hatch handling, which is absolutely a good thing as at the same time they've retained its ability to deliver some sporty driving fun — you really can throw this Vauxall about and it just comes back grinning for more.

Should you need it you can always press the City Assist button to lighten up the steering weighting in heavy city traffic and for parking — but if you forget to switch it off when you hit the open road don't worry because the city-lightness fades out automatically at speeds over 22mph.

And it's always reassuring to know that keeping it all dynamically shipshape is a fast-acting stability system. Not that you'll likely need it because even on windy motorways the Adam has that 'planted' feel; something that's not always shared by some of its rivals. And with discs on duty at each corner you'll also find the brakes drama-free.

There's a trio of pleasant surprises on opening the door and getting in: the first is the sheer spaciousness of the 'big car feel' cabin — it's genuinely Tardis with a 'T'. Second is the joie de vivre ambiance — the bespoke stars and stripes trim (on the fascia and door panels) is colour-coded to the outside paintwork (as too is the stitching on the upholstery) and works a treat, looking both fun and really stylish.

For the record, 'stars and stripes' means just that — large stars with stripes that bear absolutely no resemblance to the American flag. There's also some classy high-gloss black as a counterpoint. Thirdly, the fit and finish is to a high standard. In fact, strip away the Vauxhall identifiers and the Adam's cockpit could easily be from one of the premium German brands.

The seats are well contoured and provide real comfort and will accommodate real-world large adults with a fist of headroom and decent shoulder support. When not occupied their matching stars and stripes fabric centre panels look good and are nice to the touch. They're also well bolstered and the driver gets plenty of seat height and steering wheel adjustment for a good driving position and fine visibility including rearwards through the large rear screen (plus it's a cinch to park).

The sporty-looking, three-spoke silver-and-chrome steering wheel is multifunction (there are steering mounted controls for cruise, speed limiter, voice, phone, and media) while behind it sits a clear instrument pack; the chrome-ringed dials have glowing red needles and crisp white figures and the trip computer shows all the important stuff such as digital speed readout, range, and average mpg, etc. Also appreciated is a left foot rest that's set at a relaxing natural angle for long trips 'in the cruise'.

Some might grade the Adam as a 2+2 because there are four, not five, seats. However, the pair travelling in the back get individually-shaped seats and knee and foot room are both adult-friendly. Access via the long side doors is easy enough thanks to smooth tilt-and-slide front seats.

Once there it's unexpectedly liveable helped by deep side windows and light-coloured trim. Big, useful side bins that take cans and bottles are provided as too are cupholders and a couple of mag pockets. And, if you need to take children, there are Isofix points for child seats.

Pop the Adam's tailgate and you'll have unrestricted access to a deep 170-litre boot. If however you've more to move then release the 50:50-split seatbacks — they fold flat to create an accommodating 663-litre loadbay.

And if 'park and ride' (of the two-wheeled kind) is your thing you'll be pleased to know that one of the options is a rear-mounted cycle rack; if, on the other hand, you just like to know what's going on behind you, particularly in wet weather, then you'll be pleased to see that the Adam sports a rear wash/wipe — something many cars in this sector simply don't have.

So there you have it — a pert-looking city car that's large (and competent) enough to be an all-road car despite its 'city car' tag, with a top-notch cabin and a cracking three-pot powerplant and which can be specced, according to Vauxhall, in about a million different configurations. Feeling unlimited? ~ MotorBar