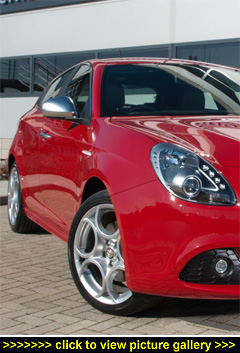 “In the UK we have something of an
obsession with German marques.
However, a little bit of what you fancy
does you good and an increasing
number of British drivers are falling
for a shapely little Italian number
named Giulietta...”

AND SHE'S NOW GOT SOMETHING NEW that a lot of guys (and gals!) have been waiting for — TCT. Let me spell it out: Alfa's self-shifting Twin-Clutch Transmission. And it's now available on both 170bhp Giuliettas: the turboed 1.4-litre MultiAir petrol and the 2.0-litre JTDm-2 diesel models.

Similar to Volkswagen's better-known dual-clutch technology DSG gearboxes (but only because they came first), Alfa's TCT works the same: one clutch engages even-numbered gears and the other engages the odds, so shifts are made far quicker.

The result is the convenience of an auto for city work alongside an 'anytime-anywhere' driver-override for sequential manual changes using either the gear lever or the small (cat's ears) black paddle-shifters on the steering wheel's horizontal spokes.

The main selling point is that the driver gains freedom to choose the mode best for the conditions or his/her driving mood, but with no loss of performance, a useful mpg gain (from 48.7 to 54.3mpg on the combined cycle) and a cut in tailpipe emissions: 121g/km for the 1.4 litre petrol TCT compared to 135g/km with the six-speed manual 'box.

That aside, the Giulietta is much as she was pre-TCT — a rival for the hearts and minds of drivers (particularly married men in need of a family hatchback) who might also be considering an Audi A3 or 1-Series BMW.

Giulietta also has another trick up her sleeve: DNA — Alfa's Dynamic Control System. Situated on the central tunnel just ahead of the selector lever is a small silver switch with three settings: Dynamic, Normal, and All Weather.

Each adjusts the car's dynamic parameters (engine, steering weighting, gearbox shift behaviour and intervention thresholds for the traction and stability controls) to a different predetermined mix. And whereas dual-clutch gearboxes used by other car-makers usually provide a Sport mode for more aggressive use of each separate gear ratio, the TCT uses the DNA's Dynamic setting to achieve more 'sporty' and longer-held gear changes when pressing on.

Complicated? Not a bit. Because you really don't need to juggle the DNA too often. Obviously the All Weather mode (intended for driving in rain or snow) can be saved for times when conditions are bad, which in this country is not that often. That leaves Normal and Dynamic.

After a week playing with the various combinations, we decided that if you want to drive effortlessly — as in a traditional full automatic kind of way — then simply leave the DNA in its default Normal mode. It is, after all, an automatic, so why not just let it get on with it.

Besides, in traffic it couldn't be easier to live with because the TCT 'box is intentionally biased towards a normal, relaxed driving style with smooth shifts the order of the day. Selecting Dynamic adds more verve if you want a sharper kickdown response; you also get a turbo boost graph added to the car data display between the main dials.

However, if it's a dash of real Alfa driving entertainment you're after then leave your Giulietta in Dynamic and use the paddle-shifters on the steering wheel (left '-' for down a gear; right '+' for up one). The paddles turn with the wheel and give you 'sporting' sequential shifting whenever you need to make best use of the gears and the 184lb ft of torque — not just for bursts of overtaking but also, for instance, the busy back-and-forth over three or maybe four ratios that tackling a challenging twisty road demands.

You can select manual at any time by using the wheel paddles. After 15 seconds with no further paddle 'blips' the TCT returns to automatic mode — unless you've already clicked the selector lever to the left and out of Drive into the manual gate.

Should you prefer, you can use the 'stick' to make manual gear changes (pull back for upshifts; push forward for downshifts) but it's more satisfying to tap the paddles with your fingertips while keeping your hands on the wheel during spirited driving.

Whichever way you prefer to drive, like any auto you first move the selector into Drive. 'Creep', just like with a conventional automatic transmission, is there the moment you release the brake.

Externally the TCT-spec Giulietta hasn't changed a jot — she's still the same sexy-looking five-door sporting hatch. Inside, apart from the TCT selector lever, it's all very much the same sporting cabin architecture that appealed first time round.

That means a visually inviting Italian look with supportive, well-bolstered ribbed-black leather seats with red stitching and a wide red slash of a fascia, grippy three-spoke wheel, distinctive switchgear (most notably the slim horizontal line of toggle switches between the audio system and the dual-zone climate control panel) for the foglights, Start&Stop, master door locking, and adaptive headlights.

Safety items are all there too, with six airbags, DNA dynamic control system, electronic Q2 diff (improves traction and reduces understeer when accelerating while exiting curves) and Alfa's own stability and traction control system.

Those seated up front enjoy plenty of room and satisfyingly firm built-in lumbar support. A good driving position is easily set and there's a well-positioned footrest for your left foot when using the cruise control (operated by a stalk on the column). There are remote buttons on the steering wheel for the audio, phone and trip computer as well as comfortable thumb cut-outs.

Switchgear is easily identified and remembered and the traditional handbrake is not obstructed by the lift-up centre armrest. And there are ample storage bins including a deep lidded tray in the top of the fascia. Inside the refrigerated glovebox there's a three-bottle 'wine rack' — if you don't drink, you can take it out for extra storage.

And while the Giulietta's rear door handles may be well disguised enough to fool onlookers into thinking it's a three-door, once you've found them it's easy for passengers to enter or exit the rear seats. The backrest angle is good, as too is the wide nicely-padded drop down central armrest that fronts a load-through hatch. Three can fit side-by-side but two's much more sociable.

The pert (from the outside) boot is bigger than expected, with 350 litres for luggage; loading luggage over the thigh-high boot lip is not a problem; neither is lifting out the rear parcel shelf-cum-luggage cover, that can be stowed on the boot floor when not required. A set of 60:40 split/fold rear seats adds versatility; the seatbacks fold forward and nearly flat. And beneath the fold-back floor there's a space saver spare wheel.

Better still, Giulietta drives as eagerly as she did when she was a manual: in other words, she's a very likeable companion, particularly with the punchy 170bhp MultiAir engine under the bonnet. And the TCT auto 'box certainly makes the Alfa more relaxing to drive in traffic. If we had to voice just one complaint, it's that she's very softly-spoken for a racy lady — some more Alfa 'bark' wouldn't go amiss when she's racing to the red line.

While TCT drivers stand to gain at the pumps, red-blooded Alfa pilots are less likely to match the official figures. Blame human nature: give someone a dashing-looking set of wheels and they'll dash around. Give the Giulietta her head and she'll show you why she's a sporting hatch — she swings through bends with minimal body roll but, like any lady, remains well mannered when the going's not so smooth . Stability control is, reassuringly, standard.

Ride-wise, Alfa have managed a fair compromise with handling — the suspension copes well on poorer blacktop although if you're running on the larger 18-inch alloys the ride is noticeably on the firm side although not jarringly so. So far as wind or tyre roar goes, there's nothing to talk of and cruising at the UK's legal limit the Giulietta's cabin is a refined place to be.

The turboed MultiAir four-pot is always keen to respond to your right foot: 0-62mph is done and dusted in just 7.7 seconds. And it's eager round corners, with a flirtatious 'drive-me' nature. The result, plenty of entertainment and not so much saved at the pumps after all. Our week's average came out at a naughty-but-nice 39.3mpg. But were we bovvered?

The problem with most family hatchbacks is that they look just that. The Giulietta, by comparison, is a breath of fresh air. Unlike Medusa, one look at whose face turned you to stone, one look at the desirable Giulietta turns you into an ardent admirer.

Fortunately she still goes as well as she looks and now has the added pull, for those who prefer a more laid-back driving style, of the TCT transmission. Romeo's Giulietta indeed! — MotorBar