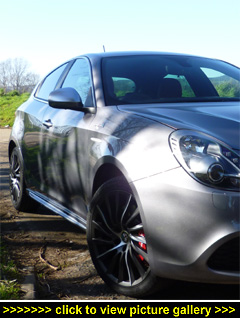 “Sportiva. Sounds Italian. And quick.
Implies dynamic ability… all very
Alfa-ish. Plus, the new Sportiva trim
adds Ł3,000 worth of luxury upgrades
for an additional cost of Ł1,860 ...”

AS USUAL WITH AN ALFA you get a great looking body but in addition the Giulietta also has a practical side to its character — in the shape of a pair of rear doors even though, like the secret dwarf doorways in Lord Of The Rings, they can only be opened by one with the knowledge. Actually, the handles are in plain sight, niftily concealed in the corners of the rear window framework.

Before you drop into the driver's seat have another look at what you can't see from behind the wheel but what others will enjoy. Because that's another facet of the enduring appeal of Alfas — their ability to touch that place in the hearts of men (and women!) that other brands just can't penetrate, and to stir emotions even in people who don't have a pinch of petrolhead in their genes.

This all might sound a tad gushing but, you know, there really is 'something' about the marque. Just look at the smouldering lines of the Giulietta's lithe body: the snarly lower grille and that evocative heraldic shield.

The Giulietta may look seductive on the outside but under the skin she's one very real-world lady — five doors and a safest-in-class hatchback bodyshell ensure that she delivers on two fronts: family usability and driving fun.

Proving that 60+mpg doesn't have to come at the expense of driving enjoyment is the 2.0-litre turbodiesel powerplant under the bonnet. This in-line four-pot unit kicks out 170bhp alongside 236lb ft @ 1,500rpm (in the DNA's Dynamic mode this rises to 258lb ft @ 1,750rpm), which is healthy enough to see 135mph on the speedo and 8 seconds on the stopwatch for the 0-62mph sprint.

So Si, all you doubting Thomases out there, a diesel Giulietta doesn't shortchange the Alfa performance experience. In fact, thanks to the superior torque of the turbodiesel powerplant there's ample power at all times and acceleration is always crisp.

Officially you could see as much as 68.9mpg on touring trips; in town the official consumption is 48.7mpg. We didn't see those type of figures in our week with the car because we were having too much of a good time making the torque talk! Even so, we did manage 43.2mpg. And we don't doubt that, driven in a most un-Top Gear manner, many owners should be able to crack the 50mpg mark.

Though frankly, my dear, I wouldn't give a damn about the economy so long as I had a cockpit to drive in like the richly inviting red leather cabin of our test Giulietta Sportiva. Mama mia! doesn't quite say it, but you get the idea…

What's refreshing is that this cabin is so not designed by robots — it looks heart-warmingly bespoke. And the sporty, well-bolstered pleated leather seats really do look fab. Okay, so the red leather upholstery is a Ł980 option but for that you also get power adjustable front seats with three-stage heating and a memory with three settings on the driver's side plus electric lumbar adjustment as well as a central rear armrest.

The multifunction sports steering wheel is wrapped in black leather with red stitching and features matte black inserts, while other recognisable Alfa details include sports dials with white illumination, a row of five one-tap switches (foglights, Start & Stop on/off, central locking, and adaptive swivelling front lights) above the tactile knurled rotary knobs for the climate control (well-sited fascia vents keep you well aired) and an alloy-look spherical gear knob with an engraved gate pattern so it won't wear away with all the use it will likely be getting.

You also get a set of aluminium sports pedals although there's no rest for your left foot — but then this is an Alfa, so more often than not you'll be busy swopping gears… Talking of which, the change action is appropriately slick and can be relied on for accurate single or block changes.

Adding to the Giulietta's driveability is unimpeded front and side visibility. Somewhat unexpectedly, rear visibility is also clean and there's good support from the powered door mirrors. It's also an easy car to place, both in edgy traffic or on a winding back road.

In the front there's generous head and leg room and room enough for elbows when doing some quick steering. Back seat passengers enjoy a fair amount of room both sides of the wide and well-padded armrest, and there are grab handles in the roof to keep them apart if the pilot's pressing on. It's all cosily comfy and few will complain about travelling in the back of a Giulietta.

The fair-sized boot is accessed through a high-lifting tailgate and its 350-litre capacity can be extended by folding down the 60:40 split-folding rear seatbacks. They drop almost flat; enough to make a useful cargo bay for loads up to 55 inches long. A load-through hatch adds a bit more versatility if you're the skiing type.

Kit levels are good and besides a lot of smart trim on the inside (as well as darkened headlights, LED daytime running lights, LED rear lights and a rear spoiler on the outside) you'll find four electric windows, all with one-shot auto up/down operation, Alfa's DNA dynamic control system, dual zone automatic climate control, cruise, multifunction display and trip computer, Blue&Me (Bluetooth hands-free system with voice recognition and media player with USB port and Aux-in), electrically adjustable and heated door mirrors, radio and CD/MP3 player with six speakers, and six airbags (driver, front passenger, front side & window). And it's always nice to have a rear wash/wipe, especially on a wet day — and we certainly get our fair share of them.

With 170bhp being put down through the front wheels you might expect some torque steer — but there's nary a hint of it. Not even when you select (a flick of the switch to the right of the gearlever) Dynamic mode from the dynamic control system. Other choices are Normal and the self-explanatory All Weather.

Dynamic does precisely what it says on the label and lets you access the best the Giulietta has to offer in handling terms, including excellent grip — exactly what you need on fast, winding, country roads. Dynamic also activates 'overboost' to push up torque from 236 to 258lb ft as well as firming up the steering and sharpening throttle reaction times. The responsive steering is fine and the brakes (discs at every corner) are reassuringly strong.

We found ourselves using Dynamic as our default setting because in this mode the Giulietta Sportiva is keen to party — all the time! The sports suspension does a first rate job of keeping things 'hot hatch' shipshape while not destroying the ride, which, even running on 18-inch alloys, remains more than just good.

Pressing on hard you need to keep the engine in its power band; easy enough as the gearlever is an obedient changer. For less ardent progress Normal is fine, and sitting at 70-ish on long motorway trips the Giulietta's good-looking cabin is a relaxing place to be.

In Sportiva spec the Giulietta makes a good show of providing stylish family transport plus, when you're alone together, she serves up some saucy driving entertainment. As they say, a little bit of what you fancy does you good. — MotorBar