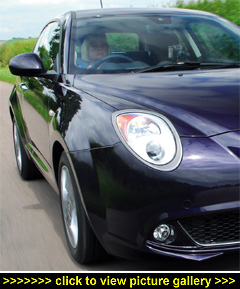 “I believe I’m correct in saying that
Alfa Romeo, that most august of
Italian brands, has never fitted an
engine with less than four cylinders
in one of its cars. Until now, that is.
So, with just two cylinders, is the new
MiTo TwinAir two pots short of an
Alfa picnic?”

TWO CYLINDERS IN AN ALFA? Yup — it's a first. It comes at a time when, for the first time since 1979, Alfa doesn't have a V6 engine in its range. Thinking about it, Alfa has missed a trick on this one. Historically, eight-cylinder Alfas were called 8C; six-cylinders were 6C; and Alfa is going to launch its four-cylinder 4C sports car next year. So why didn't it badge the two-cylinder MiTo as the 2C?

For whatever reason, the duo-cylinder MiTo has been called the 'TwinAir', just like the other cars with this engine in the Fiat Group family. So what's it all about, Alfa? Figures, is what. The headline one being 67.3, which is the miles per gallon that Alfa Romeo claims this engine will return on the combined cycle (more on this later).

The other figure of interest is 98g/km — a real boon in financial terms because it means there's no vehicle excise duty to pay, and even if this is your company car you'll pay the lowest 10% benefit-in-kind rate for the next three years. Neither will owners have to pay the London congestion charge. And the low group 9 insurance rating doesn't bite hard, either.

The new TwinAir model bolsters a car that has worked like a charm for Alfa Romeo. In tough times, the MiTo has been a stylish, feel-good supermini that offers great value. Plus it's engaging to look at, great to sit in and easy on the wallet.

The TwinAir engine generates 85bhp from just 875cc — and it's got a surprising kick to it. The reason is the turbocharger strapped to the engine, which gives you loads of torque in the lower regions of the rev range. In fact, the TwinAir drives very much like a diesel in this respect.

The tiny twin spins quickly up to its surprisingly low 6,000rpm redline. But there's little point extending the engine to high revs; instead it pays to short-shift and keep the engine in the really sweet zone (1,500-4,000rpm). The only time the little two-pot struggles is going up hills in a high gear, when you do need to change down to get you to the top.

As with other MiTos, the TwinAir has a 'DNA' switch. The Dynamic / Normal / All Weather modes make changes to the throttle response, traction control, steering and braking. However, in anything but Dynamic mode the car feels like it's got an elastic band around the accelerator pedal. So I just kept in 'D' — and I suspect you will, too.

The TwinAir engine works better in the MiTo (and indeed the Fiat Punto) than it does in the Fiat 500, simply because the noise is better insulated.

While you couldn't describe the two-cylinder engine as refined, it is, for example, far better on motorways. The phuttery sound of the little two-pot motor is unlike anything else you'll come across — halfway between a Moulinex food mixer and a lawnmower.

With its lengthy shift and notchy gearchanges, the six-speed 'box isn't brilliant either. It's a shame because the gearbox used in its sister model, the MiTo Cloverleaf, is brilliant — I reckon it should immediately be introduced across the whole MiTo range.

The fact the engine is lighter has benefits for the handling, which is more sure-footed and smooth than that of a regular MiTo, even if it can't match a MINI for fun. It feels very much like the car it's based on — the Fiat Punto — so it's grippy but not terribly inspiring.

And here's the million dollar question: In my week with the TwinAir, how close did I get to the claimed 67.3mpg average? Er, not very close. In fact I challenge anyone to better the 39.9mpg (with the emissions-reducing Start&Stop activated) I averaged in mixed driving; and I certainly wasn't hoofing it. — Chris Rees