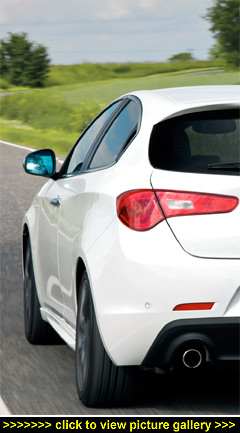 “Lovely car... seen it advertised...
great colour... how much? — just
some of the remarks from interested
folk who circled the Alfa Giulietta
Cloverleaf whenever and wherever
I parked...”

THE ALFA'S CLASSIC ITALIAN RED PAINTWORK (called '8C') no doubt helped but, colour aside, the new Giulietta has made a big impression on UK buyers since being launched last year — perhaps even more so than the Italian marque's popular supermini, the MiTo.

Since the MiTo, and latterly the Giulietta, were introduced, Alfa's UK sales have rocketed — up by 69% in the first six months of 2011.

Although the 6,448 cars sold so far this year is a relatively small number, it is nevertheless a vast improvement on the few hundred sold annually just a few years ago when the brand was heading for oblivion in the UK. Alfa Romeo remains a niche sporting brand, but it's doing a sterling job re-establishing itself with a limited three-range (MiTo, Giulietta and 159) line-up.

The new five-door Giulietta hatchback was introduced in July 2010 — 50 years after the original Giulietta model and 100 years after the Alfa Romeo brand was first created. In those 100 years the Italian sporting marque became iconic then slipped into the doldrums due to poor models with dubious build qualities but under Fiat's guidance has been 'born again'. However, whatever the brand's products, there's always been a hardcore of loyal Alfa enthusiasts willing to forgive the sins and willing to wait until better models came along.

The MiTo supermini started the fight-back and now the Giulietta has taken Alfa forward to the next level — both are realistic and reliable ambassadors for the brand, re-establishing Alfa Romeos as worthy to own for both long-term fans as well as a new generation of would-be sporting car enthusiasts who shy away from mass produced models of a similar size; for instance, Focus, Astra or Golf.

The Giulietta five-door hatch is priced from an affordable Ł17,455 on-the-road, topping out at Ł25,010 for the iconic Cloverleaf.

The wide combination of the latest lower-CO2 emission engines with a choice of both petrol and diesel power opens up ownership to business user-choosers and even fleet operators, all of whom have been attracted to the new model as confirmed by the brand's recent sales figures. The new 140bhp JTD turbodiesel engine, about to go on sale, with CO2 emissions of 119g/km and a Benefit-in-Kind tax penalty of a relatively low 13%, will appeal to company car drivers wanting an eye-catching car that others would not perceive as being a 'repmobile'.

The Giulietta looks great; the models are well equipped, have a high level of safety features, most of the engines offer high power with good fuel economy and the workmanship looks durable. My only reservation is the fit. This is a five-seater family hatch, so would-be customers need to check out whether the rear seats offer enough legroom, and whether the driving position suits. The conversion from their 'natural' left-hand drive to right-hand drive configuration can, for some drivers, cause minor irritation: minimal foot room around the pedals, the steering wheel seems offset to them, and getting the seat in the right position relative to the steering wheel was, for me, an issue.

As for looks, the Giulietta's front is typical of the new generation of Alfa Romeos — sporty but attractive with an off-set number plate and a brand new interpretation of the marque's classic shield-shaped grille. Despite having all of the practicality of a five-door hatchback, in profile the Giulietta has the styling of a coupe. This 'look' is further enhanced by the concealed rear door handles, muscular wheelarches and deep side skirts. The rear is similarly beefy, giving the Giulietta the appearance of a car that really grips the road.

Inside, the Giulietta is equally pleasant on the eye. While it looks like a sports car cabin, it's also a relaxed place to be thanks to noise suppression features that include a sound-proofing film in the windscreen, thicker side windows and damping material to counter body vibrations.

Carefully crafted materials make good use of subtle shades to make the interior feel light and airy and for easy access the main switches are grouped together in the centre of the dash.

A sporty, three-spoke steering wheel is fitted although, as already mentioned, it does take a while to find the right seat position relative to the wheel. The seats are supple and supportive and there are lots of storage compartments. The boot, incidentally, offers 350 litres for luggage.

All models, from the entry-level Turismo to the range-topping Cloverleaf, have a high level of standard equipment including electric windows all-round, electrically heated and adjustable door mirrors and manual air conditioning. Move up to the Lusso and you get dual zone automatic climate control, fog lights, leather steering wheel with audio controls and Alfa's Blue&Me hands-free infotainment system. Both these trim levels come with the 'comfort' chassis.

For a sportier drive, the Veloce model has sports suspension while the Cloverleaf's has, in addition, been lowered by 10mm for a more involving drive and a racier appearance. The Veloce also gets darkened headlights, fog lights and aluminium kick plates and pedals. The Cloverleaf model has all of this plus dark-tinted windows, sporty red brake callipers, a visibility pack and dark titanium-finish 18-inch alloy wheels.

On my Ł25,010 Cloverleaf test car, one element of the styling package stood out like a sore thumb — the green Alfa Cloverleaf on a white background badge on the front wings. It lacks finesse and if I bought this model, I would have them removed.

Fitted as standard across the entire range is Alfa's DNA system. It acts on the engine, brakes, steering, suspension and gearbox to allow drivers to hone the car's responses to the driving conditions.

For sporty reactions, select Dynamic mode; Normal is for urban environments and everyday use; and for maximum safety in low-grip conditions there's All-Weather. DNA achieves these adaptations by modifying the operating parameters of the engine, gearbox (in the case of the auto), steering, brakes and electronic differential.

To be honest (and, I suspect, like most owners do), I left it in Normal most of the time — and it was perfectly adequate, giving a well balanced and responsive drive.

Dynamic mode does produce more torque at lower engine speeds, so when more 'grunt' is required it's worth changing the setting. Perhaps the smaller 1.4-litre petrol models gain a bit more 'zip' in Dynamic mode, but for the 235bhp 1.75-litre Cloverleaf version the changing of settings was surplus to requirements.

This 1750 TBi direct injection turbocharged petrol unit is the most powerful engine in the range and, say Alfa, offers the performance of a three-litre but with the fuel consumption of a 1.6-litre four-cylinder.

Mostly that is true. The 1.75-litre Cloverleaf has real performance to back up the stunning and sporty good looks: top speed is an impressive 150mph with zero to 62mph done and dusted in 6.8 seconds.

Thanks to the turbocharging and 250lb ft of torque from 1,900rpm in Dynamic mode, the engine feels really strong, very responsive and is very enjoyable to drive — fast. But more often than not, due to busy road conditions, it was just as happy to play a more passive role — impressively without any highly-strung Italian tantrums.

Officially, 37.2mpg in the Combined Cycle is possible; my test drive saw 31.4mpg. The CO2 emissions are 177g/km so thefirst year road tax is a hefty Ł315 but it drops to Ł210 thereafter. Company car drivers will pay 25 per cent Benefit-in-Kind tax making this model not only the most costly to buy but also the most costly to run — but then it's also the most fun to drive.

The Cloverleaf's lowered suspension can, at times, be harsh on your spine, and the ride is fidgety over poorer road surfaces. But the cornering control, grip and balance shows the car's sporting pedigree.

With the Giulietta, and not necessarily just the Cloverleaf version, I can quite see why Alfas have driven back into the hearts of British customers who traditionally have a soft spot for iconic sporting brands. It's a rarer, capable and stylish alternative to the go-faster versions of the VW Golf and Ford Focus and Alfas sales results speak for themselves.

Talking of alternatives, for overall performance the Cloverleaf is not as well rounded as a Golf GTI. My test car also suffered from some notchy first gear selection when cold. Family drivers should check out the limited rear seat legroom and all drivers the cramped pedal space. It will be interesting to see how many owners choose to remove the 'afterthought'-look Cloverleaf badging.

While the Cloverleaf version is expensive to buy and run, other versions are better value — and look just as good visually with the same gorgeous, distinctive Italian styling. Other major plusses for the Cloverleaf model include the fabulous 8C Red paintwork (no other colour comes close!), the well-equipped sports interior and the powerful engine. — David Miles