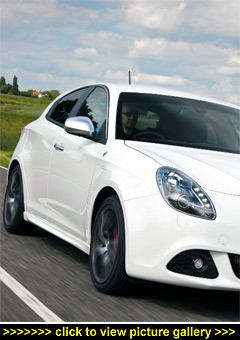 “A sexy name and a sexy looking
car, the all-new Alfa Romeo Giulietta
goes on sale in the UK from 24 July.
This family-sized, five-door hatch-
back with its coupe side profile
replaces the 10-year-old 147 range...”

BUT BEFORE THE OFFICIAL ON-SALE DATE, the Giulietta makes its public debut at the Goodwood Festival of Speed and Moving Motor Show running from 1-4 July where the Alfa Romeo brand celebrates its 100th anniversary.

The Italian Alfa Romeo brand has been famous for its beautifully styled cars, its motorsport pedigree but infamous for product quality, reliability and the ownership experience. The sales success of the MiTo supermini in the last year has done much to improve the brand's image and a revitalised and customer-focussed dealer network now makes the ownership issue less of a gamble. In the past we bought Alfas with our heart — not with our head. Times have changed and the new Giulietta looks equally as good as an ownership proposition as is the MiTo.

In the past a new Alfa Romeo has traditionally been bought by an older motoring enthusiast, mainly male, but MiTo changed that and the age of owners has come down and there is now also a significant increase in sales to female buyers. The Giulietta will build on that — its target audience is young families and, of course, the ever-important business user-choosers and fleet customers; in the UK, Alfa Romeo see a 50:50 split for sales between retail and business buyers.

Giulietta prices start at Ł16,995 and run to Ł24,495; its targeted sales competitor is the VW Golf range. Alfa says that predicted residual values for the Giulietta more or less match those of the Golf.

In the 1950s the Alfa Giulietta caught the imagination of the driving public with its sporty appeal, attractive looks and accessible pricing. Now, over 50 years later, the latest incarnation of the Giulietta has been designed to compete with the best in the mid-size C segment — the VW Golf, Ford Focus and Vauxhall Astra. That's no easy task considering the excellence of the competition.

The Giulietta is an all-new car on a totally new platform which in turn will be the basis for other new Alfa models. The power units are the latest generation Euro V compliant engines and safety has been a high design priority.

Every customer can adapt the new car to their specific driving requirements thanks to Alfa Romeo's DNA feature although DNA is just one of the electronic systems that the new 'Compact' platform was designed to integrate and exploit. Others, fitted as standard to every model in the range, include the Electronic Q2 differential and the VDC (Vehicle Dynamic Control) system.

A range of five new turbocharged engines — three petrol and two diesel — gives the Giulietta further flexibility and, claim Alfa, makes it best-in-class for emissions, acceleration and fuel consumption. Even the smallest capacity, a 1.4-litre, has a lusty 120bhp. The new 1.4-litre TB MultiAir 170bhp offers the lowest emissions and fuel consumption in its class for petrol engines of this power rating.

The 105bhp JTDm-2 engine is a flexible and economical diesel that uses second-generation MultiJet technology to combine extremely low fuel consumption with a responsive drive. The 2.0-litre is another second-generation MultiJet diesel and has the highest performance in its sector courtesy of a hearty 258lb ft of torque available at just 1,750rpm. All these engines combine Start&Stop technology (excluding the 1750 TBi Cloverleaf version) and a gearshift indicator to enable drivers to achieve the best economy possible.

The most powerful engine in the range is Alfa Romeo's new 235bhp 1750 TBi petrol unit, which offers the performance of a 3.0-litre but has the fuel consumption of a 1.6-litre by employing revolutionary technology to ensure strong acceleration at low engine speeds with minimal turbo lag.

But the Giulietta isn't just about being fun to drive. Each model, from the entry-level Turismo specification to the range-topping Cloverleaf, has a very high level of standard equipment. Electric windows all-round along with manual air conditioning and electrically-heated and adjustable door mirrors are all standard. Move up to the Lusso model and you get dual-zone automatic climate control, fog lights, leather steering wheel with audio controls and the Blue&Me hands-free infotainment system.

Both these versions come with the 'comfort' chassis specification. For a sportier drive, the Veloce model features sports suspension, whilst the Cloverleaf sits on suspension that's been lowered by 10mm for a more involving drive and a racier appearance. The Veloce also gets darkened headlights, fog lights plus aluminium kick plates and pedals. The Cloverleaf model gets all this as well as dark-tinted windows, sporty red brake callipers, Visibility Pack and 18-inch spoke design alloy wheels with a dark titanium finish.

Whichever the model, owners will get one of the safest cars on the road: the new Giulietta was recently awarded a EuroNCAP five-star crash safety rating and an overall score of 87/100 — an impressive result that makes it the safest compact car built to date, says Alfa.

With a wide range of engines and four levels of specification, Alfa Romeo expect 75 per cent of UK sales to go to the mid-range Lusso and the sporty Veloce models with the starter specification Turismo taking 15 per cent of sales and the top-of-the-range high-performance Cloverleaf version taking 10 per cent. With a 50:50 split of sales between retail and business / fleet customers, retail buyers are expected to make the new 170bhp 1.4-litre TB MultiAir direct injection turbocharged petrol unit their favourite while higher-mileage business and fleet users will go for the 170bhp 2.0-litre JTDm-2 turbodiesel.

Having driven both this week, there is really little to choose between them as far as performance goes: the 2.0-litre diesel unit being a little more responsive mid-range with 258lb ft of torque from 1,500rpm against the 184lb ft from 2,250rpm of the 1.4-litre turbocharged petrol engine. The petrol unit returned a real-life 34.6mpg and the 2.0-litre turbodiesel returned 42.7mpg. Top speed for both of them is 135mph and the 0-62mph acceleration times are more or less the same at 7.8/8.0 seconds. For business users, the petrol engine incurs 15 per cent Benefit-in-Kind tax and the diesel 18 per cent.

In the handling department the Giulietta offers superb cornering grip, very sharp, accurate and responsive steering and the ride is relatively comfortable although poorer road surfaces can unsettle the car. I thought the 2.0-litre diesel model (with different suspension settings to cope with the extra engine weight) offered a more refined and comfortable ride. As for the specifications, the Lusso versions look the best financial bet but if the buying patterns of MiTo are replicated then customers will go for the sportier Veloce versions.

A few niggles: firm and unsettled ride at times, wide B- and C-pillars cause visibility blindspots and it's not as roomy in the rear as a Golf or Focus. That noted, there are many reasons to like the new Giulietta: distinctive styling, seems well made, classy and sporty interior, first class cornering grip, balanced handling, sharp steering, powerful and responsive yet fuel- and tax-efficient engines, high levels of specification and a high safety rating. The heart and the head have it! — David Miles