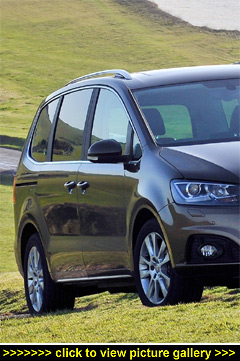 LIKE ITS VOLKSWAGEN SHARAN STABLEMATE, the new SEAT Alhambra is all-new and replaces the previous generation version which was on sale for 15 years (but with, of course, mid-life updates). For the record, both the Alhambra and VW Sharan are built on the same production lines in Portugal.

New from the wheels up, the Alhambra is a full-size MPV people-carrier with seven seats and, thanks to its clever EasyFold seating system, a wide variety of seating and load carrying combinations.

Large MPVs have taken a bit of a sales hit in recent years as owners or company car users downsize due to high tax and running costs. But the introduction of a new generation of fuel-efficient, top-end models such as the Ford Galaxy, Ford S-Max, Renault Espace, Peugeot 5008, VW Sharan and now the Alhambra will give the sector a sales lift especially as family holidays in the UK — the so-called 'staycations' — are fashionable.

The new Alhambra offers much more than the previous one: more space; far superior handling; and better looks. But it's also more costly. The starting price is Ł22,330 and ranges up to a shade over Ł30,000 but that range-topping price has yet to be finally confirmed as our test models were the first in the country.

The old line-up consisted of 1.9/2.0-litre TDI engine options and cost Ł20,370 to Ł23,705. On the issue of price, SEAT say their new Alhambra undercuts the sister new VW Sharan by an average Ł1,000 across the range and has a higher level of specification.

Today's Alhambra engine line-up is a little wider, with a 1.4-litre TSI, four-cylinder petrol unit with a forced supercharger / turbocharger system that produces an impressive 148bhp of power and 176lb ft of torque from 1,500rpm. Fuel economy is officially 39.2mpg and emissions 167g/km so VED road tax is Ł250 for the First Year and then Ł180 annually thereafter. This model is the least expensive version in the range so will sell on purchase price to people who cover relatively small annual mileages. SEAT estimate about one in ten Alhambra customers will choose this engine option.

In addition there are two 2.0-litre TDI diesel engine options: the main selling 138bhp unit and a 168bhp version. The 168bhp diesel and the petrol 1.4 TSI are badged Ecomotive but the 138bhp turbodiesel model is badged with an extra 'E' (E Ecomotive) because, with CO2 emissions of just 146g/km, it is the cleanest model in the range. The price for this version, which will be the highest seller, is Ł25,270. There is also the choice of six-speed manual or six-speed twin-clutch auto transmissions.

All models have five doors; the rear side ones slide open and closed and, on the top specification version, these are power operated. As before there are three trim and equipment levels — S, SE and SE Lux. All versions have, as standard, Bluetooth mobile phone connectivity, three-zone climate control, one-touch electrically-operated front and rear side windows, powered and heated door mirrors, front and rear parking sensors, alloy wheels, twin halogen headlights, height- and reach-adjustable multi-function steering wheel, a good sound system with eight speakers, stability control, seven airbags and remote central locking.

If a customer wants cruise control then the SE version adds that function and lots of family-friendly extra storage compartments as well as pockets, tray tables and integrated sunblinds in the side rear doors.

The SE Lux has powered side sliding doors and a powered rear tailgate, panoramic glass sunroof, sports-style heated front seats, black leather upholstery, SatNav and media system and rear-view camera plus much more. The SE version will be most popular with family and company car drivers and the S specification will be just what the taxi trade, minicabs and private hire customers want.

The Alhambra's arrow-shaped front exterior and sleek side profile is eye-catching, and looks really smart and well proportioned. Like the new VW Sharan, it looks far more sporting than its predecessor and the control and handling are a huge improvement. Body roll is minimal — it didn't use to be in the good old, bad old 'rock and roll' MPVs of just a few years ago.

The cornering is sharp with lots of grip, and with good steering feel. The ride comfort is good but I suspect SEAT have done their usual sporty tuning for the dampers, bushes and spring rates because it feels a little firmer than the new Sharan with perhaps a shade more road noise intrusion. It could, though, just be the firmer-walled self-sealing tyres.

Overall the Alhambra is high on refinement and the 2.0-litre TDI 138bhp E Ecomotive powerhouse with SE specification at Ł25,270 looks a good choice. It is a big vehicle in most ways — 4.85 metres long with seven seats but with up to 2,297 litres of load space although, in this sector, most versions are relatively small in price with low tax and running costs.

Against? Size limits easy street parking, significant wind noise from the door mirrors, firmer ride than its equally-new sister model, the Volkswagen Sharan. In its favour, the Alhambra is a thoroughly modern and well designed inside-and-out large MPV, has multiple passenger and load carrying options, a high specification, very competitive pricing (in this sector) and is very good to drive with trustworthy handling. — David Miles