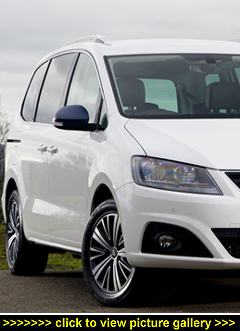 “SEAT’s Alhambra MPV takes its
name from a medieval palace site
in Granada. While not ‘palatial’
inside it does accommodate seven,
making it a serious contender for
full-on family motorists...”

SEAT — pronounced 'say-at' — brought the latest generation of its Alhambra to market mid-year in 2015 with engines that were 15% more fuel efficient and more powerful than before; it also arrived with a new-generation of infotainment systems and a higher grade of comfort and driver assistance features.

After consecutive years of record sales in the UK, the SEAT brand suffered an 11% dip in sales last year when the UK's new car market increased by 6% overall. Things have got worse in the first two months of 2016 with a further worrying 11.3% fall in UK sales when the market is up by 4.6%. Motoring pundits feel this drop in demand could be in part due to the fallout from the Volkswagen Group's emissions cheating issues as VW's UK sales are also down by 13.6%. However, VW Group's other brands of Skoda and Audi have shown 7% increases in UK sales.

Neither has it helped SEAT and their new Alhambra models that overall demand in the UK for MPVs fell by 21% last year to just over 131,000 units. In particular, retail customers 'crossed over' to the more fashionable and desirable 2WD and 4WD SUVs (some with seven seats) — a sector that saw sales rise by the same amount as MPVs fell.

Just as with SUVs, modern MPVs come in a variety of sizes: compact, medium, and large. Of the large type the Ford S-Max is the sharpest handling but with a firm ride, and the Citroen Grand C4 Picasso is the best equipped and most stylish. Also in the sales mix of large MPVs is the VW Sharan (a stablemate to the Alhambra although it is more expensive than the SEAT).

Alhambra prices in the UK start at Ł24,885 and go up to Ł34,840. There is the choice of a 1.4 TSI turbocharged petrol unit with 147bhp, a 2.0-litre TDI Ecomotive turbodiesel, also with 147bhp, and a 2.0-litre TDI turbodiesel with 181bhp. All engines have the options of a manual gearbox or a DSG dual-clutch automatic transmission which includes a fuel-saving coasting function.

Being an MPV, the Alhambra is strongly multifunctional and all versions have front-hinged doors with, for ease of access, sliding rear side doors, plus a high tailgate at the rear. Inside are three rows of seven individual seats.

Standard equipment includes electric front and rear windows, power door mirrors, loads of storage and cupholders, easy folding (flat to the floor) seats in both the middle and third rows, three-zone climate control and, usefully for such a large vehicle, front and rear parking sensors and, again useful for a people-carrier, comfort suspension.

The extra-cost options on my press car included the Ł995 navigation system with rearview camera and DAB radio. A further Ł130 will buy you an internal in-roof storage system.

MPVs are all about the combination of passenger and load carrying capacity. The Alhambra meets those challenges well, with 267 litres of load space with all seven seats in use; 658 litres with the third row folded away, and a massive 2,297 litres with the second and third seats all folded down. If that isn't enough then the vehicle can tow up to 2,400kg with a braked trailer, caravan or boat — making it the ideal family or workhorse transport.

Styling-wise it certainly doesn't look like a beast-of-burden. It has an aerodynamically-shaped front-end with a cab-forward driving position, tall sides and an upright tail — all the better to maximise on useful space. The front seats provide a high driving position and therefore good visibility for such a large vehicle — it's 4.85 metres long, 1.9m wide and stands 1.7m tall.

Whilst the suspension is configured for ride comfort, other than some body-lean during cornering it felt taut and predictable with no tendency to pitch front-to-rear during either braking or acceleration. Of course, it's no sports car but for such a big and lofty vehicle it copes well with British driving conditions.

The engine of choice will be the 147bhp 2.0-litre Ecomotive turbodiesel unit which replaces the previous 138bhp unit. The EU 6-compliant 147bhp engine is well known throughout the VW Group's brands and uses AdBlue and a Diesel Particulate Filter to reduce emissions and harmful particulates.

CO2 emissions of 132g/km means road tax is currently Ł130 per year. Officially the Combined Cycle fuel economy is 55.4mpg and during my week of motoring covering motorways to country lanes it averaged 47.8mpg which for such a large vehicle is realistic. As for performance, the top speed is 126mph with zero to 62mph taking 10.2 seconds — also good given its size.

Because of its tall-gearing (to provide the efficient fuel economy and low CO2 figures), full use needs to be made of the gearbox despite its 250lb ft of torque being delivered from 1,750rpm.

And it's not at its best being used in second gear from low-speed rolling starts, such as encountered at roundabouts or pulling out of a road junction — in these situations the engine would stall unless first gear was engaged, which was annoying but at least the start/stop function fired up the motor again quickly enough. On the open road the 2.0-litre pulls well and cruises happily at the legal 70mph motorway speed.

It has to be recognised in the UK's new car market that big MPVs are no longer family favourites, losing out to large SUVs which are perceived to be more stylish with must-have kerb appeal.

However, for those who require carrying space with versatile seating it's very spacious with a well laid-out interior, a high level of specification, and a comfortable ride. It also delivers good fuel economy and low tax costs for its size, and in this large MPV sector it's also well priced. ~ David Miles