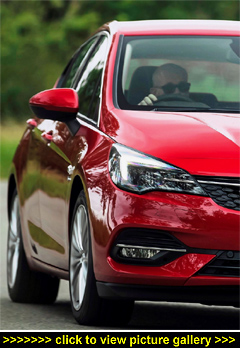 “Following a major refresh, the latest
Vauxhall Astra is now on sale in
five-door Hatch and Sports Tourer
estate bodystyles powered by a wide
range of new petrol and diesel
engines and with economy up and
emissions substantially down...”

THE REVISED BRITISH-BUILT Astra has started to arrive in UK showrooms this month (November 2019) — good news for the 25% of British motorists who have either owned or driven one since the very first Astra appeared back in the previous century, in 1979. Since then seven generations covering forty years have between them sold three million; 30,000 of them in 2018.

Prices range from Ł18,855 to Ł29,310 for the revitalised hatchback; and between Ł20,335 and Ł26,920 for the Sports Tourer estate range, which has fewer specification levels than the more popular hatch. The trim levels for the Hatch are SE, Business Edition Nav, SRi, Sri Nav, Sri VX Line Nav, Elite Nav and Ultimate Nav. The Sports Tourer has SE, Business Edition and Sri grades.

All petrol and diesel engines on offer are lightweight three-cylinder units with Stop/Start. The choices, depending on the body style and trim grade, are: 1.2-litre petrol units with 110hp and 130hp and 6-speed manual gearboxes; 1.4-litre 145hp petrol with a CVT stepless automatic gearbox; 1.5-litre turbodiesels with a 105hp manual gearbox and a 122hp version with either a six- or nine-speed autobox.

Although diesel-powered car sales have fallen considerably it has to be noted that these new Vauxhall units comply with the latest emission tests making them exempt from the extra 4% Benefit-in-Kind tax hike suffered by company car drivers. Their CO2 emissions range between 90 and 120g/km depending on the power output, gearbox option, bodystyle and spec level. Petrol-drinking models have CO2 figures ranging between 99 and 112g/km.

As a tax example, my latest Astra Hatch test car with the 1.5-litre, 122hp turbodiesel engine and 6-speed manual gearbox in Elite Nav spec has RDE2-compliant CO2 emissions of 95g/km so BiK tax is only 23% instead of 27% and First Year road tax is Ł130 instead of Ł150, although the Standard rate VED for Year Two onwards remains at Ł145. As for fuel economy, the new and more accurate WLTP figures for the Combined Cycle are 58.9 to 62.8mpg — during my week's motoring covering most types of roads and traffic conditions the real-life figure was a pretty good 56.6mpg.

With the use of lighter engines and aerodynamic bodywork tweaks, including automatically opening and closing upper and lower sections of the front grille shutter and underbody engine compartment cover plus deflector-shaped rear axle control arms, the drag coefficient has been reduced to just 0.26 for the Hatch and 0.25 for the Sports Tourer which Vauxhall says is 'best in class'.

Talking about class, the C-segment Astra still has to compete against the Ford Focus, VW Golf, Honda Civic, new Skoda Scala, Peugeot 308, Kia Ceed, Toyota Corolla, SEAT Leon, and Hyundai i30 plus numerous mid-sized SUVs such as the Nissan Qashqai, Ford Kuga, Peugeot 3008 and Skoda Karoq... and the list goes on.

Apart from its new higher equipment levels and low tax costs, the new Astra is competitive for price and usually there are deals to be had although with this latest updated line-up it's perhaps too soon to see much of a reduction in the transaction price. But new car sales are slow and the competition is fierce plus numerous Swappage and Scrappage schemes are currently available throughout the industry so it pays to shop around for the best deal.

Exterior-wise, the latest Astra Hatch looks very much the same as before with sharp, sleek styling lines. Inside it's more of the same, just a bit smarter and well laid-out. Plus it remains roomy for a hatchback of this size.

Up front there is plenty of leg and shoulder room, long reach seat and steering wheel adjustments while in the rear the legroom is acceptable although not up to the roominess of Skoda's new Scala or current Octavia models. The hatchback's 60:40-split rear seats fold down to expand the boot space from 370 to 1,210 litres (540 to 1,630 litres for the Sports Tourer estate, which is particularly impressive within its sector).

Spec-wise, the new Astra provides a whole suite of top-of-the-range technologies including the smarter, faster and more intuitive Multimedia Radio, Multimedia Navi and Multimedia Navi Pro systems that offer good levels of connectivity and are compatible with Apple CarPlay and Android Auto.

The top-of-the-range Multimedia Navi Pro comes as standard on Elite Nav and Ultimate Nav trims, with an eight-inch colour touchscreen and voice control. Connected navigation services are available and these give the driver real-time traffic information and online map updates. The navigation display uses redesigned symbols for a fresher and more modern look while the instrument cluster features a new digital speedometer.

My Elite Nav test car had, as standard, 17-inch alloy wheels, uprated SatNav with 8-inch touchscreen, electronic climate control, heated front and rear seats, heated steering wheel, front safety camera, LED headlights, and leather seat trim. It also features a comprehensive display of dials ahead of the driver which not only includes the usual speedometer, rev-counter, and fuel gauge but oil and water temperature gauges as well which is very unusual these days. The only missing item was a rearview camera — almost essential given the tight parking spaces motorists are being squeezed into these days and the hatchback shape doesn't give the best rear-quarter visibility. You have to move up to Ultimate Nav trim level to get that rear camera system plus Park Assist and Side Blind Spot Alerts.

An Astra Hatch Elite Nav model with the 122hp 1.5-litre turbodiesel engine and manual 'box like this review model could be on your drive for Ł24,850. Our test car was fitted with several extra-cost options which included an emergency spare wheel (Ł110), Emergency Call (Ł415), front and rear parking sensors (Ł480), heated windscreen (Ł320), Traffic Sign Recognition and Pedestrian Protection (Ł275) and premium paint at Ł655, all of which lifted the on-the-road price to Ł27,105 — a figure that might become negotiable if industry-wide new cars sales continue to fall.

As for driveability, some tuning has taken place to the suspension dampers and this appears to have improved the ride compliancy which is generally good but not too soft to hamper handling control. The steering has also been recalibrated to improve response and feedback at higher speeds. And while it doesn't have the handling finesses of a Ford Focus or VW Golf, the Astra's ride quality is indeed better than the Golf's.

At the heart of this Turbo D Astra is a new 1.5-litre, three-cylinder turbodiesel engine kicking out 120bhp (122hp) and 221lb ft of torque from 1,750rpm. This unit features an electrically-activated turbocharger with variable geometry turbine vanes and, like its petrol counterparts, a balancer shaft in the cylinder block for additional refinement. The exhaust manifold is integrated in the cylinder head to improve engine warm-up time to lessen emissions. Optimum exhaust after-treatment is delivered by an emissions-reduction system consisting of a passive oxidation catalyst, AdBlue injector, SCR catalyst and Diesel Particulate Filter — hence its very competitive RDE2 emissions rating.

It's not all so smooth though — the engine is noisy on start-up and vibrations do extend into the car initially until underway. Also, there isn't the smoothest of power delivery from slow start-up speeds, between first and second gears, and it was easy to stall without enough engine revs which, for a diesel, is unusual and during initial acceleration between the first two gear ratios the engine had a noticeable flat-spot before picking up again once 2,200rpm had been reached. This appears not to be a one-off having checked out other media reports, and I suspect it is down to running the engine very lean for emission reasons.

Once underway, however, the engine became livelier with a zero to 60mph acceleration time of 9.6 seconds and top speed of 130mph. Many three-pot engines have to be worked just that bit harder (compared to regular four-cylinder units) when carrying passengers or during acceleration, going up hills and at motorway cruising speeds. However, the fuel economy potential is there when driven in a reasonable manner.

There are plenty of things to like about the latest Vauxhall Astra hatch in diesel form: it meets the requirements for today's family motoring with its lower emissions and lower tax costs plus it delivers good real-life fuel economy, has improved ride comfort and steering feedback, and is reasonably well equipped. Enough good reasons, in fact, to give one a go! — David Miles