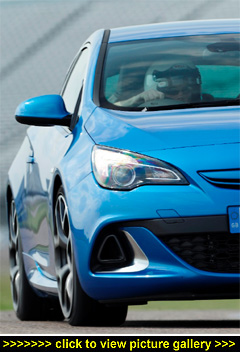 “A beefed-up Astra GTC is the basis
of the latest Astra VXR — the new
stablemate to other go-faster models
in Vauxhall’s VXR range...”

ALTHOUGH BASED ON the popular Astra GTC, the VXR version is actually a very different car, both underneath and in its muscular body styling. Its most distinctive aspect is the new tail treatment which, given its poke, is the view most motorists will be seeing the most of.

But the tail is not the only eye-catching aspect of the new Astra VXR — it also features a lower front line, lower sills, flared arches, a more rounded rear glasshouse and a 'duck-tail' boot treatment.

Particularly standout is the VXR's unique 'form and function' biplane rear window spoiler — with a carefully-designed small wing exerting downforce over the more familiar spoiler on the back screen. Also unique to the Astra VXR are the alloy wheels, tyres, seats, steering wheel and cabin.

This new Astra VXR has been put on a diet — 60kg of unsprung weight has been shed — and it also benefits from a new mechanical limited slip diff, sports brakes, and new bushing and suspension.

Not only are the dynamic handling qualities improved by this serious weight saving, but so too is performance and emissions — making this latest generation Astra VXR one of the most powerful three-door hatches you can buy.

It costs a cappuccino under Ł27,000 but it does come with FlexiRide adjustable damping, selectable ESP, a digital entertainment system (that includes a USB, iPod and Bluetooth connectivity) and LED rear lights.

For the record, the side skirts, biplane spoiler and 20-inch alloys are part of the Ł995 Aero Pack (most early buyers have specified this option). Other tempting extra-cost items include powered seats, SatNav (with SD card) and adaptive forward lighting.

The predominantly black 2+2 interior sports subtle changes to the steering wheel and secondary switches, instruments and oddments room. And you can sit two in the back although it's short on legroom for a third in the middle. The boot is also of a useful size (380 litres) and increases when the seatbacks are folded down (to 1,165 litres). And for long items there's a handy ski-hatch.

With an acceptable ride over bad surfaces and a practical load-carrying capability, this new VXR will be sure to satisfy the enthusiastic VXR community along with UK performance drivers — and it helps that this most powerful Astra has been honed on Germany's Nurburgring circuit. In addition, the mechanical LSD was developed by a racing supplier and the alloys are shod with unique Pirelli rubber.

Furthermore, to improve overall economy (compared to the previous generation VXR) as well as to minimise exhaust emissions, this new VXR has a standard-fit Stop-Start system.

The powertrain and chassis changes are not only impressive where it matters — on the road — but, critically, they have not destroyed the Astra for everyday use. So long, that is, as you are cautious about pulling out or reversing because there are major blind-spots.

Importantly, it looks the part of a rapid road car; and it feels sporting in your hands and through the seat of your pants.

Better still, under the bonnet is a powerplant with class-leading pulling power (295lb ft between 2,500 and 4,500rpm), both in the mid-range as well as in absolute terms. Its responsiveness is down to a new kind of airflow sensor and refined turbocharger, with a tuned exhaust note to enjoy.

And while the way the power pours out in third and fourth is most impressive, it also cruises quietly. Given its 155mph top speed and 5.9 second 0-60 time, the overall fuel consumption is a surprisingly good 29.1mpg (officially 34.9mpg on the Combined Cycle).

Plus points are many, including the midrange pulling power from the turboed 2.0-litre, sharp steering, slick six-speed gearchange, strong brakes and supportive new lightweight seats.

Not so easy to live with is the restricted visibility and the oppressively dark interior. There's also some kickback through the wheel under strong acceleration (not totally unexpected with 276bhp being put down through the front wheels!) and occasional road noise over some surfaces.

Overall, though, the Astra VXR comes with a good equipment tally and for performance-per-pound and smile-per-mile it's keenly priced — Robin Roberts