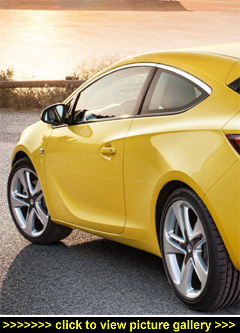 “The new coupe-style, three-door
Astra GTC joins the Astra line-up —
and keen drivers attracted by the
sporty styling won’t be disappointed
by the GTC’s responsive and very
agile feel on the road...”

AT THIS WEEK'S UK MEDIA LAUNCH Vauxhall were keen to point out that, priced from Ł18,495, the GTC costs nearly Ł1,350 less than the basic Scirocco (the GTC will sell against the VW Scirocco, Audi A3, Renault Megane Coupe, Volvo C30 and even the BMW 1 Series Coupe).

Initially customers will have a choice of six engines — three petrol and three diesels — combined with two levels of trim and equipment: Sport and SRi. A high-performance VXR version will be added in the first six months of next year, along with a cleaner (109g/km) diesel.

The three-door Astra GTC shares no body panels with either the Astra Hatch or Sports Tourer; only the front door handles and the aerial are carried over, so it has a unique appearance — the intention was to retain functionality but to make it clever, practical and affordable.

At the front of the GTC, a centre-line crease through the bonnet is complemented by slim, 'eagle-eye'-style headlamps featuring wing-shaped daytime running light graphics. Equally dramatic is the rear treatment: the rear-quarter C-pillar and pronounced rear haunches wrap around the tail and the rear spoiler is seamlessly integrated with the roofline. LED rear lighting — optional across the GTC range — echoes the stretched 'wing' motif created by the front lights.

The long wheelbase, rising waistline and wide lower section body, enhanced by the flared wheelarches, gives the GTC a really dynamic stance on the road.

On the downside, the relatively small rear side windows do nothing to help the driver's rear-quarter visibility; and while the headroom in the rear passenger compartment is just about sufficient for taller passengers, the 'nipped-in' dimensions from the shoulder up also reduce the space for rear seat passengers. To call it a five-seater is optimistic unless, that is, the rear seats are used by three children.

Thanks to the long wheelbase there is lots of legroom in the front and just about enough for adults in the rear. Being a three-door, access to the back seats is not that easy for adults. However, there is a good sized boot with 380 litres of space; with the rear seats folded this goes up to 1,165 litres. Talking of space, in line with the current Astra, the GTC's cabin storage has also been improved: by fifty per cent over that of the old Sport Hatch.

Completing the exterior styling (and standard on both Sport and SRi models) are 18-inch alloy wheels, each having a unique design. For the first time on a Vauxhall coupe in this class, 20-inch rims are available as an option on SRi models, with 19-inch wheels a further cost option on both trims. On the higher-specced SRi model, tinted glass is standard. Optional across the GTC range is Adaptive Forward Lighting and FlexRide (Ł790), Vauxhall's adaptive damping system, which I think is a must for all buyers — it automatically adapts to prevailing road surfaces and driving styles, giving drivers fully optimised handling even in the event of an emergency situation.

On the undulating Worcestershire and Shropshire roads covered during the media test drive it was obvious that GTC models fitted with this system handled better, absorbing the patched road surfaces far more easily than the standard suspension. The ride was also more comfortable and the car more settled driven at speeds over rippled and adversely cambered roads.

For more extreme driving, the GTCs were put through their paces at two hillclimb stages; one at the famous Shelsley Walsh (the world's longest serving motorsport venue and in continuous use since 1905) and the second at Loton Park.

Obviously this was not the everyday driving experience customers will experience, but the new GTC's agility and cornering grip were very welcome here, particularly so in the wet.

The GTC has undergone steering, chassis and suspension tuning on British roads by staff from Vauxhall's Engineering Centre at Millbrook, so Vauxhall versions (as opposed to European Opel-badged cars) are specifically set up for our poorer roads.

Thanks to this 'homeland' tuning, the new GTC is sharper and more involving to drive. It has also adopted the new HiPerStruts front suspension derived from the 320bhp Insignia VXR. And compared to the Astra Hatch's suspension, that of the GTC is lowered by 15mm, the wheelbase is 10mm longer, and the tracks wider (40mm at the front; 30mm at the rear).

The result is a flat and level ride made better by the FlexRide, which significantly smoothes out the quality of ride and makes the car more settled at higher speeds. Also significantly better, thanks to the new front suspension, is the GTC's turn-in ability for accurate, high speed cornering — there also seems to be considerably more cornering grip from the front wheels. Keen drivers attracted by the sporty styling won't be disappointed by the GTC's responsive and very agile feel on the road.

High quality trim materials are a given for all GTC models, with chrome-edged instruments in deep-set binnacles providing the driver with clear information. All GTC models come with DAB stereo and USB functionality; SRi versions have many other standard items including an onboard computer and leather-rimmed steering wheel.

Externally setting the GTC apart from others in the Astra range are two new colours: Flaming Yellow and Seashell. Inside there's a selection of new materials, bespoke to the GTC. Furthermore, a new premium leather trim is also available as an option and brings with it a six-way adjustable driver's seat.

Bearing in mind the GTC's sporty nature, the best choice for most average mileage private buyers will be the 138bhp 1.4 turbocharged petrol engine with Start/Stop.

Kept on the boil, this unit is responsive and fun to drive. However, let the revs fall away in the mid-range and the engine's smaller capacity shows — despite its 147lb ft of torque, the response can become sluggish for overtaking slower traffic.

Compared to other smaller capacity, new-generation turbocharged direct injection petrol engines, maximum torque is developed from 4,900rpm — competitor engines develop their grunt from 2,000rpm or less, hence the lack of response from low to medium speeds unless the engine is worked hard.

For performance, responsiveness and fuel economy, the pick of the bunch is expected to be the likely top-selling 2.0-litre CDTi turbodiesel. Start/Stop is standard and the four-cylinder unit puts out 162bhp of power supported by 258lb ft of torque from 1,750rpm. Zero to 60mph takes 8.4 seconds and the top speed is 131mph.

Officially, the combined cycle economy is 58.9mpg — driven in a spirited manner, my test car returned 43mpg. Tailpipe emissions are 127g/km so you don't pay any road tax the first year but after that it's Ł95 per annum. Company car drivers will pay 18 per cent BIK tax and it's rated as 20E for insurance. In SRi spec this GTC costs Ł22,430. You'd also be well advised to spend the extra Ł790 for the FlexRide suspension as it undoubtedly make the very stylish coupe even better.

For: Very stylish, high road presence, sharp handling, immense front-end cornering grip, settled and comfortable ride with the optional FlexRide but unsettled at speed without it. It's also roomy in the front, well equipped and competitively priced in its sector and, best of all, it's involving to drive. — David Miles