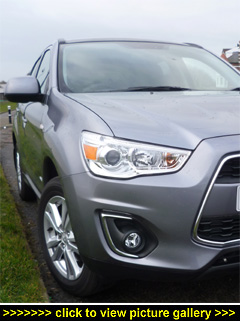 “You could spend hours trying to
come up with a catchy meaning for
‘ASX’. Don’t waste your time —
drive one instead, because one
drive is worth a thousand words...”

FRESH IN THE SHOWROOMS is the next-generation of Mitsubishi's compact urban crossover, the ASX. And, for those of you who like to cut to the chase, it comes to market cheaper (substantially), better specced (impressively so), and smoother riding (you really can feel the difference).

If any of these are on your list — Hyundai ix35, Kia Sportage, Nissan Qashqai, Skoda Yeti and Subaru XV — then the ASX should be there with them because it runs in the same crossover pack. And while all of the above can be had with 4WD, many buyers save some money by opting for the cheaper front-wheel-drive variants.

Choose the ASX, however, and you can have the 4WD and auto — and still save some of the folding stuff because prices are down across the range by as much as Ł2.5K. Not only that, but the 2014 cars also come stuffed with extra kit — to the tune of up to Ł1,000 of added equipment. All of which means that parking an ASX on your drive can be done for between Ł14,999 and Ł23,899.

And you don't have to splash out on the range-topper to get the most desirable kit — even the range-starter ASX 2 is fitted as standard with keyless entry, AirCon, Bluetooth hands-free, a surround sound set-up, power windows and mirrors, seven airbags (which helped earn it a five-star Euro NCAP safety rating), stability and traction control systems — and rolls on a set of smart alloys.

By the time you've moved up two more trim levels (via the ASX 3 to the range-topping ASX 4) your alloys will have grown to 17-inchers, the AirCon scaled up to climate control, your upholstery will be leather, your front seats will be heated (two-stage; and fast), you'll be guided and entertained by a touchscreen Kenwood infotainment system (you scroll with the same touch 'n' flick action you already use on your smart phone), and a seriously panoramic glass roof will flood your world with light (there's a powered sunblind in case there's vampirism in your family DNA); of course there's more — including push-button start, cruise control, rear-view camera for reversing, power windows, powerfold door mirrors, auto lites 'n' wipes, etc. A lot of kit; and, more to the point, a lot of kit for the money.

Jump inside what Mitsubishi bills as a 'compact' cabin — actually, it's only compact compared to its big sister, the seven-seat Outlander, and five can be accommodated, and travel with a fair degree of pampering.

If you've ridden in an earlier model then you'll notice the obvious step-up in quality and materials — fit and finish is noticeably very good. Soft-feel surfaces are now the order of the day; and the leather feels more upscale than previously. Controls and switchgear are neatly laid out and the fascia flows as seamlessly as the exterior styling.

The two main dials are easy to read, the driver's information (4WD mode, exterior temperature, range, selected gear, etc) is clear and sharp and easy to take in at a glance — exactly how you want it. To lighten the mood after dark there are LED lighting strips in the roof. And the sliding centre armrest is all the better for not cramping the traditional handbrake. All in all, a very liveable cabin.

Externally there's no mistaking the ASX's gene pool: a voracious front grille defines the front-end. Side-on, between the bulging wheel arches, there's a pronounced crease underscoring the rising window line and some extremely short overhangs (not just good visually but also good when manoeuvring and parking). Despite the big car look, in and around town drivers will be glad of its footprint: at 4,295mm long and 1,770mm, it takes up less road-room than a Ford Focus.

Settling in behind the three-spoke, multifunction, leather-rimmed wheel is a welcoming and fuss-free experience: there's plenty of adjustment for both the seat (the driver gets electric) and the steering wheel combined with decent headroom. The seat bolstering is effective without being restrictive, plus the built-in lumbar support adds to the comfort.

Seatbelts also adjust for height, and you sit high off the floor which, in turn makes for fine visibility out. The door mirrors, too, provide a decent view of your rear three-quarters.

The large glass roof adds a real sense of spaciousness, especially in the back cabin, where rear passengers benefit from backrests that recline, and have plenty of foot and knee room and can relax and really stretch out their legs.

The outer, door-mounted armrests are comfy, and the drop-down centre armrest has a pair of cupholders built-in — so much better than the pop-out variety used on some upscale rivals but which are prone to sticking.

While the ASX's 60:40-split rear seat will accommodate two adults comfortably, a third in the middle is definitely doable; and a trio — even sitting bolt upright — will each enjoy ample headroom.

The ASX's tailgate is light to use; even Mums won't have any cause for complaint. Rear seats in use, the boot is pretty big — luggage capacity is a useful 442 litres. Fold 'em flat and you'll have a level loadbay that runs to 1,193 litres — which trumps quite a few family hatchbacks. Reassuring also that the tail lights are on the body not the tailgate, so loading at night is a whole lot safer. A non-slip, heavy-duty rubber boot-liner adds to the ASX's practicality; as do the pair of large, deep storage bins beneath the boot floor.

Until now the ASX diesel had to make do with a 1.8-litre unit. Not any more — it now runs the 2.2-litre turbodiesel and very smooth six-speed automatic transmission from the new Outlander. It's a very likeable pairing — the hefty torque (266lb ft), on call from a low 1,500rpm, makes for immediate response to your right foot wherever in the power band you are when you want to call up a shot more 'go'.

In and around the houses it's an easy drive with no call for stamping the accelerator to make meaningful progress. With the new wave of small but pokey engines, people tend to forget that bigger engines don't need to work anywhere near as hard, which means they can be surprisingly economical — plus, of course, they're much nicer to drive.

Additionally, a larger capacity powerplant means higher gears can be used more of the time and at lower revs, so keeping the cabin refined. Maximum speed is 118mph and zero to 62mph only needs 10.8 seconds for mission accomplished. So you and your ASX won't be left at the lights! You do need to watch the speedo, though — the 2.2-litre lump lets the ASX cruise quietly, which can be deceptive on motorways where ninety can easily feel like 65mph. You have been warned!

And not only is progress smooth, but the economy is impressive. Officially this automatic 2.2-litre four-pot drinks diesel at the rate of 48.7mpg (Combined). Our real-world result? 47.1mpg. And that was driving 'normally' — that is, without employing any fuel-saving driving techniques.

Few rivals ever come close to matching their official mpg figures, so it's doubly impressive that not only does the 4WD auto ASX do so, but that it also manages close to 50mpg.

The six-speed auto 'box is of the type that 'learns' — and constantly adapts to — your driving style. Column-mounted alloy paddle-shifters are easy for your fingertips to reach, and there's a manual 'sport' mode for when you want to decide the moment to shift up or down… or just want the engine's torque to set you up for a bend or a quick roundabout.

The all-wheel drive ASX is normally front-wheel drive; two alternative modes — 4WD auto and 4WD Lock — can be called up at the touch of a button (logically sited south of the selector lever) to make it fully four-wheel drive whenever you need it. Child's play.

Although it rides well it's not shy about serving up a quick drive on 'B' (and back!) roads. The brakes do a smooth job of scrubbing off speed, and even running in 2WD there's reassuring grip from the front-end (it's even better, and still very car-like to drive, with the four-wheel drive active).

Press-on drivers will be pleased to know that the ASX carries speed predictably through corners; the steering is precise and even major adjustments can be made with confidence — the safe, well-balanced and stable-riding ASX doesn't have a sneaky bone in its lightweight bodyshell.

It may look SUV-ish but the ASX's ride quality is, as befits a 'townie', well judged and compliant enough to make our unsporting British roads pleasantly driveable — even potholes, while obviously best avoided for the sake of your alloys, don't hold their usual dread. This latest-gen ASX is certainly a comfortable place to be when using the Queen's highways (and byways).

Happy in town, equally happy in the 'burbs and the great outdoors, the ASX4 auto has much to recommend it, particularly if you don't want your family-friendly 4x4 tarnished by the 'fashion accessory' tag. It's good to drive and won't cripple you with fuel bills. Would we spend our own money on one? Absolutely. — MotorBar