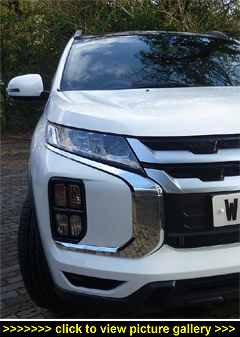 “Mitsubishi’s latest compact SUV,
the ASX, has the benefit of a 4WD
pedigree — it’s made by people
who’ve been producing four-wheel
drive vehicles for over eighty years...”

FOR 2020 THE ASX has been extensively-revised inside and out. Looks-wise it sports a dynamic wraparound new face incorporating Mitsubishi's signature 'Dynamic Shield' grille with LED headlamps and stacked auxiliary lights, all capped by a clamshell bonnet; along the cleanly-styled flanks distinctive — but not overdone — 'squared' wheel arches are wrapped around black and polished-face 18-inch alloy wheels; LED rear light clusters adorn the tail and skid plates — at the nose and tail — are an understated nod to its 4WD drivetrain.

Priced from just Ł20K, the ASX will be sure to make it onto the shortlists of those also considering the likes of Citroen's C3 Aircross, the Nissan Qashqai, Seat Ateca and, Peugeot's 3008. Diesel power is now off the ASX menu but you do get a new 2.0-litre petrol-drinking four-pot with 147bhp (backed-up by a useful 143lb ft of torque). Go for the four-wheel drive version and your engine will be partnered with a six-speed CVT autobox with Sport mode and column-mounted paddleshifters.

Mitsubishi's new 2.0-litre unit manages without a turbocharger but there's enough power to deliver zero to 62mph in 12.2 seconds and a top speed of 118mph. While it provides more than ample performance pootling around, this automatic four-wheel driver is pretty light on the gas: a week's hard driving over mixed roads resulted in a 43.2mpg average against the official Combined Cycle figure of 38.7mpg. So, much better than expected. Despite the absence of any boosting, the 2.0-litre pulls willingly; if you really want to ramp it up simply select the Sport setting and plant that right foot.

A panoramic glass roof floods the interior with light — anytime that's not to your liking a quick press on a switch summons a powered blackout sunblind to block the sunshine. An eight-inch touchscreen serving the infotainment and navigation systems fills the centre spot in the fascia; it's set usefully high, making the visuals especially easy to take in with just a sideward glance when on the move.

Immediately below the piano black-framed screen is the panel for the very efficient climate control AirCon, notable for its big knurled rotary knobs and buttons that are within easy reach and great on the go as they can be operated 'by feel'. Ahead of the driver is a trad-style set of dials in their own individual nacelles separated by a digital multi-function trip display that tells you everything you need to know. The posted speed limit, incidentally, is shown on the active mapping.

From behind the three-spoke, leather-wrapped multifunction steering-wheel (cruise, phone, audio/media, speed limiter) it's all good news: the cockpit is roomy with a full fist of headroom even with the seat raised to its highest position. And, being an auto, the nicely-angled left-foot rest is much appreciated. The driver's electrically-adjustable seat offers eight-way personalisation while the front passenger gets manual adjusters. Not that that's a problem because both seats are very comfortable with supportive backrests and both have two-stage heating. The long outer armrest and extendable central armrest will be sure to satisfy any front passenger and prevent elbow clashes with the driver.

The driving position is commanding and gives a clear view of the road over the bonnet. Good-sized door mirrors and a regular-shaped rear screen make it easy to keep an eye on what's coming up alongside and behind while a rearview camera ensures clear-cut parking.

As you'd expect, there's also a DAB radio, Bluetooth with music streaming, Apple CarPlay and Android Auto for smartphone connectivity, and ample USB ports. Navigation is by TomTom and it's a cinch to use thanks to large icons, quick responses, and crystal clear 3D mapping. There's also voice control for the phone and audio.

The ASX scores favourably in the Clutter Test too, coping well with personal stuff thanks to a sensibly-sized glovebox, a deep storage box (with 12v socket and a sliding top tray) beneath the central armrest, two cupholders alongside the trad-style pull-up handbrake and door bins that while on the narrow side will still take a smaller bottle of O2. A long tray at the base of the centre stack is convenient for mobiles, as is the pair of readily accessible USB ports sited close by.

In addition to the kit mentioned elsewhere such as the panoramic glass roof, leather upholstery, etc, there's also keyless entry and start with an engine Start/Stop button, four electric windows (driver's is one-shot up/down), powerfolding door mirrors (on demand and automatically when locking and leaving), an auto-dimming rearview mirror, Cruise Control, roof rails, and a set of 18-inch alloy wheels.

With a 4.3-metre-long footprint and a 2.67-metre wheelbase the ASX easily accommodates five doors and five seats. Travelling in the back is made more enjoyable by the panoramic roof; sitting noticeably higher than those in front, there are clear views out for those who rate people-watching higher than smartphone action.

Rather unexpectedly, the well-padded back seats are wide enough to accommodate three side-by-side although most users are likely to put adults in the front and youngsters or the family pooch in the rear. There's loads of foot room and the knee-room is okay with enough air between the roof and passengers' heads to keep most people smiling. To maximise space there are no door bins on the back doors but you do get a pouch on the rear of the passenger seat plus a big, well-padded drop-down centre armrest that incorporates a pair of cupholders. Isofix child seat fixings are also provided for both rear outer positions.

The ASX's ride comfort is exactly what you'd expect from a compact SUV with enhanced ground clearance and 4x4 underpinnings — most of the time your passengers will not be aware of what you're driving over. That's not to say the SUV-style set-up makes you immune to pothole aftershocks (just avoid them!) but the ride is perfectly okay and during a week's testing none of the team heard a single grumble from any back-seat users.

Two trim levels suffice for the ASX range; the Dynamic model comes with front-wheel drive while the range-topping Exceed versions get four-wheel drive and an automatic transmission. In spite of its 190mm ground clearance the ASX feels reassuringly agile and serves up resolute direction changes — helped by the fact that automatic four-wheel drive is the default setting (driving torque is varied to maintain traction on loose surfaces or adverse on-road conditions, from 98% front:2% rear to 50% front:50% rear). Pressing the button ahead of the selector lever lets you instead select 4WD Lock or 2WD.

Further boosting the dynamics is the ASX's sophisticated multi-link rear suspension set-up that's a step-up from the less adroit beam axle used by some of its rivals.

The steering earns a thumbs-up in the city and at faster out-of-town speeds grip levels are confident enough to keep you unruffled through the twisties. For those itching to get their rubber dirty, or who just want something that will keep them moving through the winter snow, the ASX's taller ground clearance (plus usable approach and departure angles) combined with the determind traction from the four-wheel drive should be just the ticket.

For a compact SUV the ASX comes with some valuable towing muscle, being happy to haul a braked 1,300kg. Accessing the boot is made easier by a wide tailgate aperture and parcel-shelf load cover and if you're loading up on the inside there's far more space than you may be expecting, and certainly more than is offered by some of the competition. With the 60:40-split rear seats occupied there's a very useful 406 litres for luggage; enough for even tricky items such as kiddies buggies to go in without a fight. Fold them down (they lay properly flat) and you'll have a versatile 1,193-litre loadbay with a seamless floor. You'll also find quite a bit of room for oddments in the individual compartments underneath the boot floor. And, of course, there are roof rails for longer items or a luggage box.

Compact SUVs are proving especially popular and it's easy to see why. Along with an eco-friendly footprint, the smart-looking and agile-handling ASX offers that sought-after 'commanding' driving position along with wallet-saving real-world fuel economy, plus it's roomy enough and affordably priced. ~ MotorBar