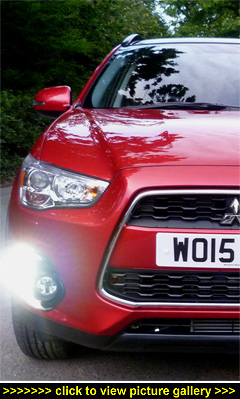 “People who buy a Mitsubishi
appreciate the value of proper
all-wheel drive, which is why
they’ll favour the paddle-shifting,
auto-only 2.2-litre ASX — it only
comes in all-weather 4WD spec...”

FOR MANY 4X4 OWNERS, Mitsubishi's reputation for building rugged, go-anywhere off-roaders is as solid as Land Rover's. These all-wheel drive aficionados have traditionally bought Shoguns to do their dirty work and more recently Mitsubishi's Outlander has also found a place in their hearts.

However, since 2010 a new Mitsu has been winning their affections — Mitsubishi's compact crossover, the ASX. And with worldwide sales of over 700,000, it's already a global success.

Recently revised, it now offers the latest EU6-friendly 1.6 petrol (115bhp) and 1.6 Di-D diesel (112bhp) engines — both come with 2WD although the diesel is also available with 4WD — with prices running from Ł15K through to Ł23K. Topping them is a 147bhp 2.2-litre turbodiesel.

Going for the more powerful 2.2-litre powerplant, already found in the Outlander, will cost that little bit extra — Ł24,899 — but for that you do get undiluted all-road, four-by-four ability along with a six-speed automatic transmission complete with steering column-mounted paddle-shifters.

Looks-wise the ASX is a fluently styled four-door crossover. The roof slopes down towards the tailgate enough to finesse the glasshouse but not so much that it cramps rear headroom.

A large chrome-edged black double grille flanked by vertical LED daytime running lights lends an agreeably assertive rather than aggressive air to the nose, while at the side a rising waistline with distinct but not OTT wheelarches defined by black garnishes and eye-catching two-tone 18-inch alloys help it stand out from the crowd.

While the Outlander, particularly in plug-in hybrid (PHEV) guise, has played a major part in ratcheting up the Japanese carmaker's public profile, it shares an important link with the ASX: they're based on the same platform. Which, given the proven capabilities of the larger Outlander off-roader, also endows the ASX with competent off-road ability.

Not only that but they share the same size wheelbase so passenger space in the ASX is generous; its compact five-door bodyshell and versatile seating for 4 or 5 adults also makes it just the right size for customers looking for a practical, enjoyable family car.

On-road this ensures a muscular power delivery; it responds quickly and cleanly to the accelerator and is willing at lower speeds as well as in the important mid-range. In tandem with the six-speed autobox it takes all the stress out of driving in today's congested, stop-go traffic — not forgetting the additional convenience of the paddle-shifters.

Top speed is 118mph with 62mph passed in 10.8 seconds after pulling away. And it's no gas-guzzler either — in fact the top spec 2.2 4WD Auto has best-in-class CO2 emissions and fuel economy. Officially the 4WD 2.2 turbodiesel officially returns 48.7mpg in the Combined Cycle and on test our average after 500 hard-driven real-world miles was an impressive 42.7mpg. Less hard-pressed owners should get closer to the magic Five O.

However good or exciting what's under the bonnet or the floorpan, it's the cabin that ultimately makes a car personally 'your' car. And the smart, all-black ASX interior doesn't disappoint — it is family-friendly spacious and, thanks to a panoramic glass roof, bountifully bright. LED mood lighting around the glass frame adds to the ASX's night-time ambiance.

First and foremost drivers will appreciate the fine driving position — quickly achieved courtesy of the every-which-way powered driver's seat — and the fact that you can see down the bonnet.

The comfortable front seats both have two-stage heating and leather upholstery with perforated centre panels along with well-judged bolstering that keeps you located but doesn't make it hard to get out. Headroom is good and at the other end footwells spacious enough for you to drive with your boots on!

Views rearward in the driving and door mirrors are good while the white-on-black rev-counter and speedo dials are crisp and clear, as too is the driver's info display set between them. The selector lever is topped by a shapely leather gearknob although there are paddle-shifters for on-the-fly gear changes.

Many will also appreciate the traditional handbrake alongside which is the 4WD button (4WD | 4WD Lock | 2WD). The climate is smoothly controlled by three knurled rotary knobs and a one-shot powered blackout sunblind protects you from the sting of the midday sun.

Trim and fit and finish are satisfying, with smart high-gloss black finishing to the wheel's inner rim, boss and central fascia. There are ample places to keep personal 'stuff' supplemented by bottle-holding door bins plus you'll find handy two-tier storage beneath the sliding centre armrest that doesn't cramp the handbrake. Overall a very inviting and liveable interior.

Back passengers will be more than satisfied with their lot — getting in and out is straightforward with overhead 'assist grabs' should they be needed (most likely they won't). Headroom is okay even for those who have been brought up to sit up straight.

Two can happily share the centre armrest with built-in cupholders while wide armrests on the doors are well placed to accommodate 'outer' elbows. Legs, too, can be stretched and there's masses of foot room — the low transmission tunnel also means three can sit side-by-side without cramped feet. All enjoy good views out through the deep-ish side windows.

Luggage and cargo needs are catered for by a 442-litre boot accessed via an easy-lift tailgate. Usefully there are deep side bins along with a 26-litre underfloor compartment. Fold down the 60:40 split rear seats (they drop forward effortlessly) and the boot transforms into a practical 1,193-litre loadbay with a totally flat and seamless floor. Need more? No problem — the 2.2-litre will happily tow a braked 1,400kg trailer.

Tough it might be but that doesn't stop the ASX from riding well — it's comfortable and the compliant suspension delivers a smooth hatchback ride. Body lean is well controlled and even running in 2WD it grips well through quick corners; even more so in 4WD when you can make good use of the all-wheel drive handling. As you'd expect, in the wet it feels reassuringly secure.

No complaints about the steering either; the 225/55 Bridgestone rubber wrapped around the black metallic 18-inch alloy wheels bites well on turn-in and braking is strong. For a 'high rider' the ASX (Active Sports Crossover) is unexpectedly nimble, and really satisfying to drive on the black stuff. And just so you don't forget, it's equally capable in the rough.

As its sales figures show, the ASX has already won a considerable number of admirers who know a sure thing when they see one — it's a rugged yet refined crossover that's agreeably usable both on paved roads and off-road, versatile and, given its automatic transmission and all-wheel drive, refreshingly good on fuel.

And when the winter weather freezes the country to a standstill the four-wheel drive ASX provides dependable security and the ability to keep moving when hardly anything else is. — MotorBar