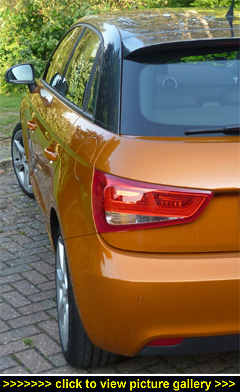 “Sportback: Audi-speak for five
doors instead of three in its slick A1
hatchback — all in a body that is
more or less exactly the same size
with the same compact footprint
and the same running gear as a
three-door A1...”

Generally speaking, five-door models never look quite as sleek as their three-door siblings — but the A1 proves the exception to the rule. A contrasting coloured roof — in black, grey or silver — creates a stand-out look. Go for the Samoa Orange paintwork of our test car and you can make it stand-out+. If this colour combo was a Facebook page you'd be getting a mass of likes.

Swing open a door and you're presented with the usual beautifully-built Audi cabin — in other words, quality trim and switchgear and an easy-to-read instrument cluster (with glowing white numerals) and a welcoming upmarket interior.

High gloss black air vent surrounds, knurled aluminium rotary switches for the A/C and the pop-up MMI display screen on the dashtop (use it with the MMI controls under the two central air vents to access much of the A1's driver and media information) are all classy touches.

Plenty of glass makes for entertained passengers as well as fine visibility for the driver to the front, side and even through the rear screen.

Sporty, supportive seats upholstered in leather with cloth centre panels hold you without squeezing and, combined with generous steering wheel, seat height, seatbelt and lumbar adjustment, ensure that just about anyone can set a first rate driving position.

In the front there's good room in all directions for your head, feet, shoulders, elbows, legs, knees, and shins; further improving driver comfort and convenience is an auto-dimming mirror, a height-adjustable armrest between the front seats, one-shot windows, AirCon that pumps out super-chilled air guaranteed to make sticky summers a thing of the past, and a light and accurate gear change action for the five-speed manual 'box.

The multifunction leather-rimmed steering wheel is very tactile and great to grip. Another regular Audi feature makes a welcome appearance — the selectable digital MPH reading in the instrument cluster between the analogue speedo and rev-counter.

Plenty of in-cabin storage bins and cubbies, including a box under the front passenger seat for 'secure' out-of-sight storage and a large bin under the front armrest, help keep the cabin tidy.

Getting on board is, obviously, far easier for your rear passengers than in the three-door version — actually, all four doors open wide. Once seated, they can relax: headroom and legroom is fine for Mr & Mrs Average and there's room for a youngster between them although for daily use it's best as a four-seater — unless, of course, you're carrying three children side-by-side in the back. Six-footers will fit — depending on the size of the person sitting ahead of them. Alternatively, just use the rear seats as a convenient shopping shelf!

Behind the rear passengers is a 270-litre boot (the same size as in the three-door A1). And this is where the five-door's extra versatility comes into its own: drop down the 60:40 split rear seatbacks (they don't fold completely flat; but flat enough to accommodate cargo) and you'll have an extended loadbay of approximately 50 x 36 inches that's able to swallow 920 litres of 'stuff'.

Having those two extra back side doors certainly makes loading and unloading the full cargo bay even easier. For any overspill, there are storage compartments under the boot floor, which is also home to a tyre repair and inflation kit. And should you ever need to tow anything, the Sportback will pull a handy 1,200kg.

Our Sport came fitted with a set of optional 17-inch seven-blade alloys but even with the standard Sports suspension — stiffer spring and damper settings over the SE model — it rode comfortably enough (still firmly, but not crashingly so). However, if you want 'softer', request the Dynamic suspension (a no-cost option) when you order your Sportback and you'll be sorted.

The A1's handling is definitely sporty thanks to a composed and grippy front-wheel drive chassis that's assured enough for some entertaining driving when you're riding solo — always the best time to have some fun. It feels alert and agile rounding corners and reassuring through the esses — plus there's some out-of-sight hi-tech gadgetry to hold back understeer when pressing on some.

For full-on 'sport' usage you'll want the 1.4 TFSI petrol unit (120bhp, 138bhp or 182bhp) with an S tronic twin-clutch seven-speed gearbox. The 1.6 turbodiesel we tested, helped by a light and accurate gear change action, was game enough (0-62mph in 10.7 seconds), although its forte is economy: officially 74.3mpg on the combined cycle. To help it achieve figures this good, a Start/Stop system is fitted — and it works unobtrusively in the background.

Drive it after sampling an A1 powered by a TFSI petrol engine and you'd say its soundtrack can be gruff. Nonetheless, it's fine cruising motorways — which is one very good reason for choosing this road tax-exempt turbodiesel that might, if you drive it right, return in the region of 70mpg.

Our best was 56.1mpg at the end of a week driving over mixed roads. A figure that will no doubt appeal to the most likely buyers — small (upwardly mobile) families. As will the running costs, made better by an affordable fixed-price servicing contract.

As well as looking chic on your drive, being frugal at the pumps and fun to drive, the A1 gets you a big car feel that's as endearing as its neat footprint. — MotorBar