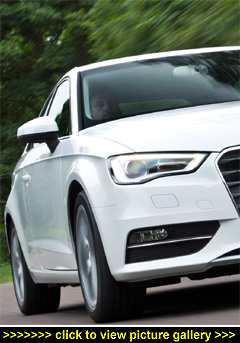 “One in five cars that Audi sells
is an A3, and that’s for a model
that’s survived fully nine years in
production — a lifespan that’s almost
unheard of among medium hatch-
backs. Perhaps that’s why the new
A3 looks so much like the old one —
if it’s popular, why change it?”

REMARKABLY, THE AUDI A3 has been soldiering on virtually unchanged in its current form since 2003. Almost no medium car ever lasts so long in production without being replaced.

Well, nine years on, we now have a new A3. You could be excused for thinking it's still the old one, so conservatively has its styling been updated. But it is, in fact, all-new, and is the very first car to use the VW-Audi 'MQB' platform that sits under the next VW Golf MkVII.

So, you're interested in buying an A3? Then your first question should be: petrol or diesel? Consumer organisation Which? recently did a comparison of petrol and diesel cars and found, contrary to received wisdom, that many models are in fact cheaper to run over a typical ownership period in petrol form, rather than diesel. I haven't done all the sums, but one thing I can tell you is that Audi's petrol engine is a whole lot more satisfying to drive than its diesel.

Before driving the petrol-fuelled 1.8 TFSI, I had a drive in the 147bhp 2.0 TDI, which I thought was perfectly competent, with plenty of torque and an easy driving style thanks to its low-rev punch. It's not as refined as I was expecting, though, but overall it makes a very commendable package.

However, it's just not as much fun, as smooth, or as quiet as the 1.8 TFSI petrol version, which is a super-sweet motor that's also impressively refined. When you turn the wick up and rev it hard to get the performance out of it, the TFSI flies with real gusto, posting a 0-62mph time of 7.2 seconds.

The standard-fit S tronic automatic gearbox is most welcome — you can use it in fully automatic mode, with a Dynamic mode button to sharpen up its changes and keep the revs high. Or you can use the paddles on the steering wheel to change gear manually, which works very well indeed, with the usual Audi caveat that sometimes it will change gear for you as you near the rev limit, resulting in a 'double change' scenario which can get irksome after a while.

So here's the crucial question: what does the new A3 chassis feel like to drive? It's crucial because the A3 is the first car in the VW Group to be based on the new 'MQB' platform which, as already mentioned, also underpins the next VW Golf.

The simple answer is: if this is the future of VW Group medium-sized cars, then VW, Audi, Skoda et al have little to worry about. It is, in short, a very mature-feeling, comfortable and fun-to-drive chassis.

In terms of handling, the A3 is utterly confident. It's very happy turning into bends; remaining very true to its line. The feeling is very 'planted' with no jitteriness or waywardness in evidence. It's also very safe, with mild understeer and effective stability control. It may not be the sportiest car around bends, but it is a perfectly sorted all-rounder.

The only slight issue I have is with the electric steering. In the Sport version I drove, its feel is surprisingly light when you're in Normal mode. However, switching to Dynamic does transform it and it becomes much weightier and feels much more like a hydraulic system. And I would imagine that many drivers may prefer a chunkier feel in Normal mode for everyday driving.

The new A3's ride quality is much better than some Audis, and that's a comment which applies whether or not you have the Sport suspension fitted.

Unlike before, you can choose between standard, Sport or S line suspension across multiple models. The latter two drop the ride height by 15mm and 25mm respectively. I didn't get the chance to try the S line set-up, but even in Sport spec the ride is more than acceptable.

The cabin remains a fabulous place to be, with lots of high-quality textured surfaces and beautifully machined TT-inspired air vents. There are some instances where the differentiation from more premium Audi models is a little evident — the faux-leather look of the main dash top, for instance, but overall Audi's reputation for interior excellence remains untainted.

Trim levels are the usual trio of SE, Sport and S Line, but this A3 is better equipped than before, with AirCon, multimedia system, iPod connectivity and Bluetooth all standard.

While the 1.8 TFSI is my preferred A3 at present, the star of the range may well turn out to be the 1.4 TFSI 140 petrol, due in Spring 2013. With its 140bhp and cylinder-on-demand technology, it should be both rapid and economical (a claimed 57.7mpg).

For now there's just a three-door A3. A longer-wheelbase Sportback will be joining the range in 2013, which will have the same longer wheelbase as the new VW Golf, and which Audi promises will have its own distinctive road manners. There will also be an S3 for hot hatch lovers, which I for one can't wait to drive. — Chris Rees