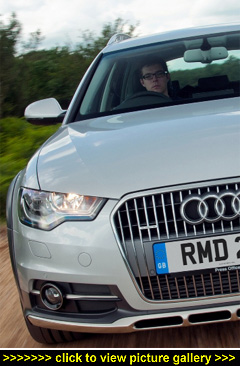 AROUND 600 UNITS will be available this year and around 1,000 next year. These are in addition to the 13,000 UK annual sales achieved by the new A6 saloon and Avant estate introduced during the past year.

Allroad buyers have a choice of four engines — all 3.0-litre V6 units. Three are diesel units with the choice of 201bhp, 241bhp and the new BiTDI 308bhp (this twin-turboed powerplant is also used in the A6 saloon and Avant estate). The sole petrol option is a supercharged 305bhp unit. All engines are mated to multi-speed automatic transmissions with quattro all-wheel drive.

Although longer and wider (L:4,940mm; W: 1,898mm) with a lengthened wheelbase for improved rear seat passenger legroom and more boot and load space, the new Allroad is still 70kg lighter due to the increased use of aluminium components. This reduction in weight obviously helps improve fuel economy and lowers CO2 emissions by 20% over the outgoing models.

And for those using an A6 Allroad for towing there is more good news; the maximum braked towing weight has been increased by 500kg to 2,500kg. Boot and load space runs from 565 to 1,680 litres.

Adaptive air suspension is standard across the range as too are start/stop, regeneration braking energy capture and Audi's Drive Select function which tailors the ride comfort, steering and throttle responses to the driver's choice. A navigation system, leather upholstery, 18-inch alloy wheels, front and rear parking sensors and hill descent control are also standard-fit, as too are underbody protection panels.

Audi UK chose the challenging Devon country lanes and narrow A/B roads around and over Dartmoor for motoring hacks to put the new — and much more agile — A6 Allroad through its paces this week.

Agility in these conditions is a must which, despite its increase in size, the lighter A6 Allroad now has — but with a little more bodyroll than the A6 Avant estate due to the increased ground clearance.

Also needed, and provided, is impressive engine responsiveness and seamless gearchanges, overall sure-footed quattro all-wheel drive cornering grip, sharp and trustworthy steering accuracy and powerful brakes. All these requirements the new A6 Allroad delivers, with only the steering giving less feedback than is ideal.

The quattro system impressed me as always, and it didn't appear to dull the engine's performance. Having four-wheel drive in conjunction with the adaptive air suspension, which also features a mode to raise the estate, allows for considerable off-road driving capability and the new hill descent control is another useful addition.

While the Allroad is not a heavyweight 4x4, it can nonetheless cope easily with hilly farm tracks, slippery slipways and, of course, the worst of our UK road surfaces — especially when they're flooded or covered in snow and ice.

I had a brief run in the A6 Allroad with the new 308bhp/479lb ft BiTDI twin-turboed diesel engine which is new to the entire A6 range. Fast it certainly is: top speed is limited to 155mph and zero to 62mph takes just 5.6 seconds. And, as you can imagine, with a massive 479lb ft of torque available from just 1,450rpm, you're never short of 'grunt'.

Despite all that get-up-and-go, fuel consumption is not daunting with an official 42.2mpg — my test drive returned 32.2mpg and that's impressive given the type of hilly and winding country roads and the amount of power under the bonnet.

With CO2 emissions of 176g/km, road tax is Ł325 in the First Year and then Ł215 a year after that. Company car drivers will be stung by a Benefit-in-Kind tax levy of 29%. However, given the Ł49,445 purchase price of this model, these running costs are not likely to be an issue.

This diesel unit does however come with a must-have feature. The twin exhaust system has an inbuilt electronic acoustic gadget which allows the tone to be changed using one of the Allroad's many computer driver aids. If a V8 petrol burble is your tone, this one's for you.

But the best selling version of the A6 Allroad (predicted to be the choice of 86% of buyers), will be the 3.0-litre TDI 241bhp/427lb ft model priced at Ł44,690. In real life motoring conditions this unit doesn't really loose out to the BiTDI twin-turbo unit; it is just as impressive and makes more financial sense.

Top speed is 147mph and zero to 62mph takes 6.6 seconds; officially it will average 44.8mpg and my enthusiastic test driving over those challenging Dartmoor roads returned 34.2mpg.

And that figure can easily be improved upon on in more usual driving conditions on motorways or even busy A and B roads — I really wouldn't expect any driver to get less than my test drive figure in normal on-road use. Additionally, this unit has an attractive lower road tax cost (Ł170 annually) due to CO2 emissions of 165g/km.

There is no doubt the A6 Allroad is a niche model but it is more versatile than a traditional A6 Avant estate and less daunting to drive in traffic than a large Q7 SUV although the higher ground clearance induces body roll at times during high speed cornering.

Reasons to buy include the stylish looks and the classy and beautifully crafted interior that offers a roomy and comfortable cabin. Other major plus points include great poise and balance, all-wheel drive traction, a strong engine, seamless gearchanges from the seven-speed S-tronic automatic transmission plus more load space and an improved towing ability. — David Miles