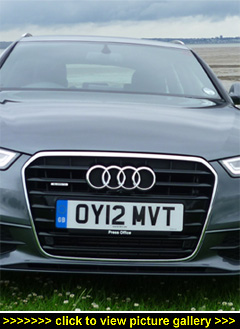 “Audi’s latest A6 Avant not only
packs a lot of cargo into its elegant
boot, it also packs a knock-out
punch — thanks to its twin-turboed
308bhp 3.0-litre powerplant...”

OVER THE PAST FEW YEARS Audi has come to dominate the executive and prestige market but even with so many being bought there's an ongoing supply of new models.

One model that enjoys huge popularity with prestige buyers is Audi's impeccably attired five-door A6 estate — in fact it currently outsells BMW's 'Five' Touring (estate) models as well as the E-Class estates from Mercedes. No mean feat.

And now there's an even more desirable A6 Avant — the model we've been driving this past week, the searingly quick 308bhp BiTDI. Backed up by 479lb ft of torque, on tap between 1,450 and 2,800rpm, it's the most potent Audi V6 TDI ever to enter production.

On the road this potent bhp-torque combination translates into formidable acceleration: with power going to all four wheels, the BiTDI storms off the line to hit the benchmark 62mph in 5.3 seconds; keep the pedal pressed to the metal and, road permitting, it will run to its governed 155mph maximum at a pace that not many cars can match.

But what really impresses is not just the readily accessible power but the eager manner in which it's served up — this V6 diesel revs as willingly and as smoothly as any petrol engine, even at the top end of its rev band.

Overtaking is done imperiously, with staggering ease and mechanical aplomb. Fortunately this BiTDI stops as well as it goes: the brakes — large vented discs at each corner with big callipers visible through the 14-spoke 19-inch alloys — kill speed with fabulous nonchalance.

Not only that, but the twin-turboed powerplant sounds really great: in Sport mode the BiTDI's 'trick' exhaust makes it sound alluringly aggressive — an acoustic flap in the tailpipe converts the diesel exhaust note into a stirringly growly soundtrack that can fool people into believing there's a high-performance petrol V8 under the bonnet.

Two things add to the satisfyingly muscular thrust: first, the BiTDI's standard-fit quattro four-wheel drive system that ensures that it's all done with the least possible fuss, whatever the weather; and second, the silky-smooth eight-speed Tiptronic automatic transmission with steering wheel-mounted paddle-shifters for your manual intervention whenever you wish.

Stylistically the new Avant is as assured as it is subtly sporty. Inside it's not so shy about flaunting its true character — the cabin's décor is the usual mix of tasteful high-end materials, classy design and impeccable instrumentation and controls; in fact, everything you come into contact with inside this A6 Avant is beautifully put together and operates with a satisfying engineered feel.

Suffice to say that standard kit is generous — Audi's intuitive MMI system looks after all your multimedia wants while the driver will be cosseted in an ideal driving position. Even the SatNav screen is a delight to use — watching the touchscreen glide gracefully out from the dash when needed is endlessly satisfying. The navigation is 3D with full postcode input, and it's directions are totally trustworthy!

Wherever you find yourself sitting, you'll feel luxuriously cradled in a supportive seat (your back will certainly thank you!) upholstered in soft Milano leather — and with plenty of room in every direction.

Both power-operated front seats have extending seat bases for extra under-knee support (a real boon on long trips), power adjustable lumbar support (both up/down and in/out) as well as easily adjustable (via a button on the side) headrests. Side and seat base bolstering is just right, and seatbelts also adjust for height.

Additionally, the driver benefits from a two-setting seat position memory and gets the best view of the fabulous 3D-effect instrument cluster: tear-shaped rev-counter and speedometer dials sit either side of the comprehensive multifunction driver's display; a nice touch is the stylish fuel readout that curves down the right-hand side of the speedometer scale, marked by small bright white LEDs reminiscent of the daytime running lights.

The driver's display can be configured on the move in the blink of an eye to show a selection (vertically stacked) of whatever is most important to you — we kept the reassuringly accurate digital speed readout on almost permanently and, quite frankly, with it you really don't need an analogue speedo at all. As you'd expect, the selected gear is always shown.

Everyone travelling in the BiTDI will find it easy to keep their cool thanks to the four-zone climate control — and if you prefer to roast, it will happily oblige you. Two adults travelling in the back can settle back in seats that match the fronts for looks and comfort and set 'their' own climate in the limo-sized space. Front or rear, the cabin is a quiet, refined and a very relaxing place to be; hardly surprising with 70mph calling for just 1,400rpm. Watch out though, because it feels and sounds just as effortless at three-figure speeds!

Enhancing driver convenience is the ability to customise settings for, among other things, lights and locking. There's also a push-button Start, and driver's door switches to activate the rear child locks and release the tailgate, and powerfold heated door mirrors (on demand and automatically on exit locking).

If you wish to further indulge yourself, the list of desirable extra-cost options is as long as your credit line is good and includes comfort seats (with heating, cooling and massage functions), acoustic glazing, a 15-speaker 1,200-watt Bang & Olufsen sound system, TV receiver, Night Vision Assist (a thermal imaging camera that 'sees' in the dark and displays 'warm-blooded' road users ahead, Park Assist (automatically steers you into both parallel and perpendicular to the road bays), head-up display (key information projected onto the windscreen), blind spot warning, lane departure detection, etc.

Online services for the MMI system such as Google Earth are also available: these include news and weather information and lets drivers plot detailed routes on a computer then download them to the SatNav before setting off.

While five can be accommodated, there's also more than enough luggage and cargo space to go round: 565 litres in the boot; 1,680 with the rear seats folded down. Releasing the seats is easy — simply pull the levers either side of the boot. And although the well-padded rear seat backrests don't fold completely flat, it's not a problem. A rail system built into the boot floor adds additional versatility as the tie-down eyelets can be position exactly where you need them.

For a versatile estate that you could move home in, the Avant certainly does a good job of giving its passengers a comfortable ride over most road surfaces — even running on the stand-out 19-inch alloys fitted to our test car (wrapped in 255/40 Pirelli P Zero rubber), it serves up a compliant mile-masking ride.

Neither do you have to drive far along a testing stretch of road to find out that this estate feels sportingly nimble and composed; of course, the new lightweight bodyshell helps. However, its huge grip allied to tight body control means there's almost no lean during quick in-quick out cornering — helped no end by the precise and fast-reacting, energy-saving electronic power steering.

Keen drivers can experiment with the Drive Select system — this allows you to tailor the suspension settings, steering and throttle responses and Tiptronic shift points to your personal taste.

While it will cross continents with ease, the bi-turbo A6 Avant has something of a big 'Q' about it — and we're not referring to the quattro four-wheel drive system (that is correctly spelt with a lower-case 'q'). We're talking about the understated Q-car looks that let you drive seriously quick (if you must) without attracting attention.

Given that it's the sort of car that Jason Statham could drive in the next Transporter movie, its luxury cabin, near-brutal performance and its combined economy figure of up to 44.1mpg, I'm surprised you're still reading this… I expected you to be on your way to your local Audi dealer by now! — MotorBar