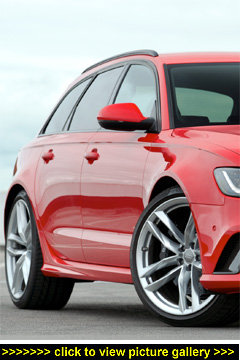 “Every last one of the 200 new
RS 6 Avant estates destined for the
UK this year (they start arriving
next month) has already been sold,
despite a Ł76,985 price tag.
However, most carry a vast list of
options so the real prices will be
closer to Ł100K...”

THE NEW AUDI RS 6 AVANT competes for premium high-performance sales against the BMW 550i M Sport Touring and the Mercedes-Benz E63 AMG Estate in an exclusive sector which sells just less than 1,000 a year in the UK. Although only available as an Avant estate, the new RS 6 will also compete against the BMW M5 and the Jaguar XFR-S saloons.

Top speed is governed at 155mph but can be derestricted by an Audi dealership and increased to 189mph. Whatever the top speed, the zero to 62mph acceleration time stays at 3.9 seconds; an impressive 15% faster than the outgoing model. And a figure that makes the RS 6 faster for acceleration than most supercars.

It may be a serious sports car under its smart estate skin, but this new third-generation RS 6 Avant quattro estate can move five people in luxury — if not quite total ride comfort — and, if needed, the 565-litre boot can be expanded to 1,680 litres of load space.

And although the power output is slightly less from the new V8, it matters not because the all-important torque is now higher: 516lb ft from 1,750rpm rather than 479lb ft.

To nicely cap-off these impressive figures, the new RS 6 Avant is 1.66% less expensive than its predecessor even though it is more advanced, better looking in a muscular sort of way, and really looks like a top-of-the-range premium hotshot model on the inside.

The heart of the latest RS 6 Avant is its 4.0-litre, V8 twin-turboed petrol engine which pushes this model into the 'supercar' league but without the usual high increases in fuel consumption and CO2 emissions.

This new V8 also uses cylinder-on-demand technology so it can operate as a V4 under low load conditions at road speeds above 15.5mph and engine speeds between 930 and 3,500rpm. The switch between four- and eight-cylinder modes takes a few hundredths of a second — and the only real indication to the driver that it's taking place is a visual signal in the instrument cluster.

A start-stop function is also included in the engine design to bring emissions to nil when the car is stationary. There are, of course, the usual Audi engine/transmission response adjustment settings which allow the driver to personalise the dynamics.

On the move this engine excels: it's staggering for response and acceleration, bearing in mind it's a luxury estate over five metres in length and weighing over two tonnes and fitted with potentially power-sapping quattro all-wheel drive, not to mention an automatic transmission…

So, we know the top speed as standard is restricted to 155mph but this can be 'unlocked' to reach 189mph. We know that the 3.9-second nought-to-62mph is astonishing in a car of this kind — yet even more impressive is its zero-to-100mph figure which is said to be 8.7 seconds.

And just as impressive is the fact that all this performance from a twin-turbo petrol engine comes with no drawbacks (for this sector) in fuel economy or high CO2 emissions.

The official Combined Cycle figure is 28.8mpg and on my test drive this week around the traffic congested roads of Bracknell and Ascot, some legally fast running on the M3/M4 motorways and the winding and hilly side roads around the Berkshire countryside, the fuel consumption was 24.1mpg — not at all prohibitive in this performance car sector.

The much-reduced CO2 emissions of 229g/km still mean a VED road tax cost of Ł840 for the First Year rate, and then Ł475 for the second year onwards.

As already mentioned, the RS 6 Avant has an eight-speed tiptronic auto 'box with Sport, Manual and Drive modes, operated by either shift-paddles or the gear selector lever depending on the driver's mood or driving style. The lower ratios are tightly spaced for relatively quick changes maximising the explosive power output of the engine, while the 'tall' eighth gear optimises fuel economy during open-road cruising conditions.

Drive goes via the quattro all-wheel drive system which distributes power as required fore and aft. In addition to smoothing out the delivery of the huge driving power, there is a torque vectoring function, a self-locking centre differential and a sports diff in the rear axle to shuffle drive between the two rear wheels for optimum cornering grip in all road and some off-tarmac conditions.

The Avant runs on huge 21-inch wheels wrapped in 275/35 rubber. Grip is immense in wet or dry conditions during cornering, but more importantly during acceleration. Drive to all four wheels keeps the estate well balanced.

However, on the downside it does cushion the driver from feeling exactly where the power is being distributed, and the same lack of feedback also applies to the steering. I'd liken it to the difference in the sensitivity you get from your fingers with and without rubber gloves.

Adaptive air suspension is another standard feature and this '6' is the first RS model to receive this treatment. The system can be adjusted via the onboard Audi Drive Select controller to provide various levels of ride comfort and handling ability — although probably most people will leave it in its Auto setting.

Our media launch test cars were fitted with this option and even in the Comfort setting on country roads the ride was harsh, with considerable noise and shockwave intrusion from pothole impacts.

On smoother motorway surfaces the ride comfort with the coil spring system is fine but overall, given the UK's deteriorating road surfaces, I would suggest sticking with the standard air system. This, incidentally, is a view upheld by Audi who believe the majority of RS 6 Avant owners will stay with the standard air suspension set-up.

Against: Lack of feedback through the quattro all-wheel drive and steering functions, well equipped as standard but still too many too-expensive extra-cost options which really should be standard in a niche performance car of this quality and image.

For: Explosive acceleration, big improvements in fuel economy and lower CO2 emissions, marginally lower in price than its predecessor (not that that really matters much in this market sector), beautifully-crafted high spec interior, roomy, muscular exterior styling, and overall quality.

The resurgence in the new car market for performance estates or 'shooting brakes' by well-off customers bored with big SUVs is notable — Aston Martin, BMW, Jaguar, Mercedes and Porsche are all restoring life to the market sector with new sports machines that are not just loads of fun to drive but which can still carry large loads in the back. Just like this RS 6. — David Miles