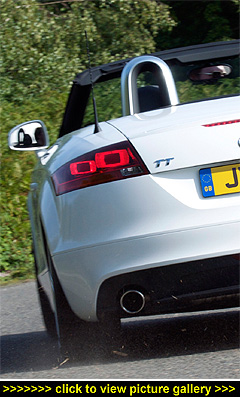 “Going topless can have unwanted
repercussions, as proven recently
in some quarters; but if you must, a
more responsible way is to opt for
a convertible or cabriolet — such
as one of Audi’s TT Roadsters...”

WITHOUT ANY REGRETS, I HAVE JUST GONE TOPLESS in the long-serving but still very desirable Audi TT Roadster which, following the introduction of a 1.8-litre TFSI petrol engine to both the soft-top and Coupe hardtop models, recently became much more affordable.

There are bigger engines and bigger prices — you can, if you want, spend as much as Ł50,925 on a TT. Also available for both drop-top and fixed roof versions are 2.0 and 2.5-litre petrol and 2.0-litre TDI diesel engines. And, depending on the engine of choice and level or specification, you can also choose between two- or four-wheel drive (quattro). With thirty-one TT Coupe and Roadster models on offer there's one thing you can be sure of: you'll be spoilt for choice.

My test car was the new 1.8-litre 158bhp Sport version, priced at Ł26,090 — to my mind the most cost-effective version of the entire Roadster range. But given our poor record for sunshine hours in the UK and the extra-small but nevertheless handy two rear seats, the 1.8 TFSI 2+2 Coupe would be my optimum choice — and it's cheaper: Ł24,075.

Interestingly, Audi (with four soft-top convertibles in its portfolio — the A3, A5, TT and R8 Spyder) recently conducted a survey about UK convertible buyers. For the record, this country is the second largest in Europe (after Germany) for the sale of convertibles, cabriolets, and roadsters. For Audi, the UK is their largest Cabrio market world-wide. Audi says — and they do have a point — that even with our unpredictable weather such models, even with the roof up, still look out of the ordinary and are highly desirable.

It appears from the Audi survey that two thirds (64%) of Britain's convertible owners either never, or only rarely, go topless. And almost half (46%) cited 'exotic looks' rather than wind-in-the-hair driving appeal as their primary reason for choosing a soft-top.

Women users were far quicker to drop their top: 39% said they always drive with their top down whereas only 32% of men said they did. And by far the largest group likely to drive topless are 25 to 34 year olds.

The Audi TT is, of course, not new; it's been around since 2007 but has undergone various tweaks and upgrades, and seen revised and additional engines added. Like its main affordable competitor, the Mazda MX-5, these classic open-top sports cars are pretty much 'timeless' and accordingly hold their used values very well.

I see in my Cotswold locality more TTs driven by seemingly affluent ladies of all ages and older empty-nester couples who are still young at heart when it comes to choosing 'their' car. A friend of my wife still regrets having to change her TT Coupe for a Golf five-door hatch when grandma duties came along.

Given the driving conditions normal on today's traffic-congested roads, ever more stringent speed limits and the increasing cost of fuel and road tax, the introduction of the free-revving 1.8-litre turbocharged and intercooled, direct injection 158bhp petrol engine makes a lot of sense. The 184lb ft of torque available from just 1,500rpm means it's also a very responsive unit, giving plenty of get-up-and-go from low speeds and plenty of mid-range overtaking zip.

The top speed of 139mph is a smidgen slower than the 2.0-litre petrol model, as is the zero to 62mph acceleration time of 7.4 seconds — but that's plenty of power and performance and, realistically, all you'll ever need.

The fuel economy is good as well: officially it's 43.5mpg. Better still, during my test drive I averaged 44.6mpg driving on a mix of roads that took in motorways and stop-start commuter trips as well as country lanes and B roads. The CO2 emissions are relatively low — 152g/km — so road tax costs a bearable Ł170 a year (company car tax is 20%).

But it's well worth paying the extra because the seamless automatic transmission works really well with this engine; and it doesn't in anyway detract from the sporty driving nature when required — and makes driving so very easy in busy stop-start conditions.

The exterior design of the Audi TT both in Roadster and Coupe body styles is a classic — it simply cannot be confused with any other sports car, hence its enduring appeal. Inside it is equally timeless: beautifully designed and well put together. The Roadster has wide-opening doors for easy access although these can be a bit of an issue when trying to get in and out of the car in confined side-by-side parking bays. The well insulated fabric roof is power operated and folds neatly away behind the front two seats in what, in the 2+2 Coupe, would be the rear seat area.

With the roof raised, visibility to the rear-quarters is very limited, making parking and pulling out of road junctions difficult at times. There is a conventional rear boot that offers 250 litres — not much and the boot is shallow, but enough room for soft overnight bags and a few odds and ends.

The Roadster's boot is one of the reasons I would probably opt for a TT Coupe because although in that version the rear seats are tiny, they can still be used for carrying extra luggage and the seats also fold, increasing load space to as much as 900 litres.

The interior equipment for the Sport level includes AirCon, leather and Alcantara upholstery, electric windows, plus a good sound system. Needless to say, there's an extensive list of extra-cost goodies including DVD-based SatNav with Bluetooth (Ł1,525) and, something I would definitely add to 'my' spec, the very useful and desirable Ł185 multi-function flat-bottomed steering wheel.

The Roadster's ride comfort is generally good although I would stick with the standard 17-inch alloys over the larger 18-inchers (Ł1,280) fitted to my test car: the standard wheels look just as good and the ride is more compliant.

Overall the Audi TT Roadster is a classic soft-top sports car and its current design, although long-standing, has not dulled its appeal one jot. Reasons to buy include the looks, it's fun to own and drive with excellent handling, is beautifully built, and has a lovely interior plus it has sound residual values.

Even the restricted rear visibility (with the roof up), shallow boot and firmer ride on the optional 18-inch wheels will not put people off. And the welcome addition of the 1.8-litre turbocharged petrol engine will broaden its appeal even more. Going topless in a TT may not get you in the papers, but it will get you a lot of admiring glances! — David Miles