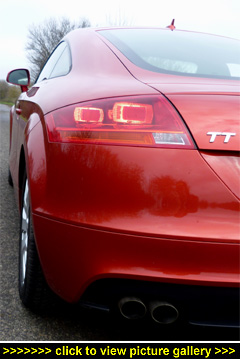 “Absolutely right it’s still got it.
The TT. Like the 911, it’s a time-
honoured icon. As Coco Chanel —
or was it Yves Saint Laurent? —
once said: ‘Fashion comes and
goes but style never goes out
of fashion.’ And the TT has style
in spades...”

THE REALLY GOOD THING about the TT though is that you don't have to be rich to drive something so stylish. Unusually, while convertibles generally commandeer all the cachet, in the TT family it's the coupe that's the real charmer.

Or you could box clever and buy a Ł28,585 2.0 TDI coupe quattro that runs to 140mph, despatches the 0-62mph sprint in a satisfyingly brisk 7.6 seconds and, amazingly, stretches a gallon of diesel fuel to cover as much as 65.7 miles (official extra-urban figure). In these days of the ever-shrinking pound, even those running a sports car are as interested in the fuel consumption as much as the acceleration and top speed figures.

From the four interlinked chrome rings on its deep, all-black single frame grille, the TT's lines run cleanly up and over its thrusting nose, flowing past the pronounced and geometrically precise wheelarches and round the aerodynamically curved tail. The low glasshouse is defined by a tapering roofline and frameless windows. A handsome beast, the TT coupe will still look as fresh in 2023.

Even after several subtle makeovers the TT's cabin still resembles the stunning 1998 launch model's Bauhaus-inspired 'less-is-more' interior. It also hints of some serious driving — you sit really low in well-padded Alcantara-and-leather sports seats that provide support in all the right places and more than enough bolstering to keep you (and your passenger) in place during spirited driving.

Snugly belted-in behind the TT's multifunction flat-bottomed wheel, your fingers curled round the meaty leather rim, you feel an integral part of the machine. Directly ahead of you, the dash is a finely-hewn piece of work with dials that you'll never tire of looking at.

Adding to the 'take me round the track' feel is a stubby gearlever, close to hand for snatching those changes as the rev-counter closes on the redline. And just to make sure you know your duty, the wide forward centre tunnel emphatically divides the cockpit into a clearly defined driver-focused section and a less dynamically-involving passenger side.

The coupe is a 2+2 so it's no shock to find that while there's plenty of room in all directions up front for the driver and passenger, the back seats are best for children — few adults will want to squeeze in there. Don't feel guilty — it's an excellent and socially plausible excuse to only travel with your most amusing friends.

However, they do have a better use: fold down the 50:50 split backrests and you extend the 292-litre boot into a handy 760-litre cargo bay — along with other white goods, we even got a small cooker in there! Alternatively, leave then up and you have a convenient full-width 'parcel shelf' for shopping overspill. Talking of storage, the cabin has plenty of cubbies and big door pockets for owners who like everything in its rightful place.

Switchgear is kept to a minimum; all of it as lovely to use as it is to look at. Chrome highlights are used tastefully and your ongoing impression of the cabin is of its premium quality — the TT might have flingability but you won't find a hint of blingability.

The dials for speed and revs are easy to read on the fly — particularly welcome is the crisp white digital road speed readout in the driver's information display. It's all you really need.

Some drivers strongly dislike electric handbrakes (they'll appreciate the TT's trad item). Me? I'm a traditionalist at heart but don't mind either although I'm no fan of stop-start systems or gear change prompts. The TT will prompt you to change gear, but at least it doesn't nag so can be ignored — until the day our political masters find a way to outlaw free will. Believe me, secret courts are just the thin edge of the wedge...

Oh, and despite the low-slung driving position, parking a TT is no more tricky than reversing a run-of-the-mill hatchback even without parking sensors (they're optional).

A week of pretty hard driving (well, wouldn't you?) that included quite a lot of messy in-town work saw an overall average of 45.1mpg. For the record, the official mixed-driving consumption figure is 53.3mpg; and with a modicum of self-restraint I would say most drivers should be able to break through that magic 50mpg ceiling.

Power from the turboed 2.0-litre four-pot engine is a very usable 167bhp backed by 258lb ft of torque; CO2 emissions are 139g/km. A passenger who hadn't checked out the 'TDI' badge on the bootlid wouldn't really know if it was a petrol or diesel powerplant under the bonnet. Effective cabin insulation makes it even harder to guess.

Power is sent to all four wheels in these quattro versions via a six-speed manual gearbox. No problem with that — the short gearlever has a lovely, crisp change action with a well-weighted throw, and the clutch pedal engages cleanly. Some may think rounded gear knobs passé but the TT's fits the palm perfectly and makes for an effortless wrist movement whatever your body's position in relation to the gearlever. One size, as they, fits all. Perfectly.

Where this smooth-running diesel scores is with its torque — the hardest punch of it hitting between 1,750 and 2,500rpm. Combined with the slick changing short-shift 'box, overtaking manoeuvres are set in motion and executed fast whether you're dropping just a single gear or block-changing several. Plus there's also plenty of engine braking when you need it; the other kind, through the pedal, is first rate.

As to that earlier quip about 'flickability', it was no joke: with four wheels doing the gripping at all times the TT goes obediently wherever you point its nose. And, once committed, doesn't deviate from the driver's chosen line.

Critics often complain about a loss of 'feel' at the helm in four-wheel driven sports cars. And yes, there always is; but it's an unavoidable consequence of all four-wheel drive systems. In reality it's a small price to pay for all the extra traction and wet-weather driveability. Anyway, ride the same horse or drive the same car regularly and you meld with its character.

So don't lose any sleep over the TT's steering — it's fine. Accurate, too: thread it through a series of quick bends and you won't be complaining. Factor in the tenacious all-weather handling and the TT coupe easily lives up to its sports car looks. The ride, albeit on the firm side, is nevertheless well-judged (even speed bumps don't jolt) and long journeys pass quickly, quietly and comfortably. And, if you're in the mood, entertainingly!

The stylish TT is not just a good-looker with a strong showing of street cred designed to appeal to the egos of those who value form above function; it's also damn good fun to drive… at whichever point on the Ł25-50K scale you've bought into. — MotorBar