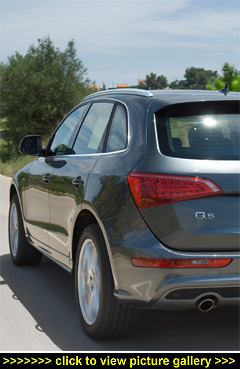 “In the battle for big-brand premium
sales in the UK, Audi currently leads
BMW, Mercedes, Jaguar and Lexus.
Such is demand that they are already
releasing their 2011 model year cars
in the UK, including the slightly ‘less
taxing’ 141bhp Q5 2.0 TDI...”

ONE OF THE MANY SECTORS AUDI NOW COMPETE IN IS SUVS. Yes, they have had quattro all-wheel drive for many years but no SUV — at least not until the huge Q7 came along a couple of years ago. This was followed, early in 2009, by the medium-sized five-door, five-seater Q5 — perfect timing for our last 'Arctic Winter' where 4x4s and SUVs were literally life-savers.

Proving they really are a vehicle for all seasons, SUVs are on our roads as business transport; mums use them on the school runs; families use them at the weekends and for stay-in-the-UK holidays; they tow boats, caravans and horse trailers with ease, and a visit to any equestrian event — from polo matches to pony club camps — will see the car parks full of such vehicles.

Audi recently introduced a 'less taxing' 141bhp 2.0-litre TDI turbodiesel engine for the Q5 which, because it now has Start-Stop fitted as standard, produces lower CO2 emissions (down from 172 to 162g/km). Consequently the road tax has dropped to Ł155 and BIK company car tax is down to 24 per cent. For the record, all other four-cylinder Q5 models also benefit from the new Start-Stop function.

As a quick reminder, the Audi Q5 is every inch a state-of-the-art premium SUV with high visual impact. It has a beautifully designed and high quality interior with a roomy five-seat cabin and a large load area which ranges from 540 litres with the rear seats in use to 1,560 litres with them folded down. And just because it is an SUV, the Q5 does not come up short in conditions where it will spend most of its life: on-the-road.

Audi says the Q5, with its quattro all-wheel drive and longest-in-class wheelbase, has been designed to deliver an on-road driving experience that is closer to a sports saloon. And Yes, thanks to the quattro system, the grip and roadholding are good.

Although I have been driving the 141bhp 2.0-litre TDI version, the Q5 range has other engines to offer: 167bhp 2.0-litre TDI; 335bhp 3.0-litre TDI; 2.0-litre TFSI 177 and 208bhp petrol units; plus a 3.2-litre FSI 266bhp petrol option. There are three trim and equipment levels: Standard, SE and S line but not all engine options are available with all trim levels.

The 3.0 TDI and 3.2-litre FSI models have a 7-speed S-Tronic auto transmission as standard; all others have a 6-speed manual gearbox but there is the option of automatic transmissions for 208bhp 2.0-litre TFSI and 167bhp 2.0-litre TDI models for an extra Ł1,450.

Following a recent average two per cent price increase (Ł600), which includes the addition of some extra equipment such as Start-Stop for four-cylinder models, 2011 model prices range from Ł27,410 to Ł39,910.

The core Q5 is well equipped anyway with lots of safety kit, air conditioning, electrically-operated windows and mirrors, excellent sound system and alloy wheels. The S line enhances the specification even more with leather upholstery and trim, sports suspension and 19-inch alloys instead of the 17 or 18-inch wheels of lesser versions. A combination of bigger wheels and sports suspension give a very firm ride that's unsettled and noisy over poorer road surfaces, and the large wheels tend to follow ruts and ridges caused by heavy lorries on our roads.

As for this recently added 141bhp 2.0-litre TDI direct injection turbodiesel engine, its maximum torque is 236lb ft from 1,750rpm — the same as for the larger 167bhp TDI unit, so in theory there is no pain in losing a few bhp. When comparing the two, top speed for the 141bhp unit is 118mph instead of 126mph; 0-62mph is 11.4 seconds instead of 9.5 seconds; and the official average fuel economy with Start-Stop on both engines is 45.6mpg. My real-life test drive economy was 44.2mpg but that was without the Start-Stop function which had not been released at that time — so expect slightly better mpg.

Also in real-life motoring conditions, the high fifth and sixth gear ratios do not readily cope with the power reduction. The 141bhp engine is not so responsive at low- to mid-range speeds so I needed to drive on country roads in fourth or fifth instead of fifth or sixth. Even at very low speeds in town or pulling onto a roundabout there was a tendency for the engine to stall, even with the vehicle rolling, unless first gear was engaged.

It might sound rewarding on the pocket but this latest Ł31,890 141bhp model is not that rewarding to drive and with no road tax or BIK tax savings over the 167bhp TDI models my view is that customers might as well go for the more powerful unit. The 167bhp version with the mid-range SE trim has more power, a better engine response and will ride our roads better because of the softer suspension and smaller wheels. They suit the Q5 better and at a cost of Ł30,840, there is a saving of Ł1,050 and the VED and BIK taxes are the same.