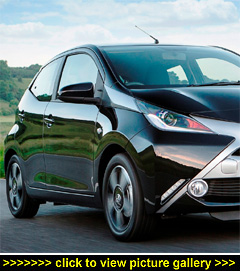 THE GLOBAL ADVERTISING agency's suggestive Pan-European marketing strapline for the all-new Aygo city car — set to appear in UK dealerships from 1 July — is a not a command to 'get on yer bike' but a rather unclear invitation intended to convey the 'fun' to be had from Toyota's city car.

The latest Aygo's mission statement is to attract young, urban-based customers, and to bring more emotion and a greater sense of playfulness to the Toyota brand.

Available with both three- and five-door body styles, Aygo prices are definitely 'youthful' — starting at È8,595 and rising to È12,395. Better still, as a launch offer the base 'x' grade versions are being offered with a È600 saving, so you can go fun yourself for È7,995. A free one-year insurance offer (for buyers aged 21+) is available on all versions except for the base 'x' model.

Whatever your age and whatever your budget, Toyota have an Aygo for you. From the entry-level x model, to the x and x-play, and on to the best-selling x-pression. At the top of the Aygo tree there are two special editions: x-cite and x-clusiv.

Apart from the 'fun' element, affordability is a key issue in most small car market sectors. UK buyers like to hang on to their money and frequently opt to acquire a new car by using PCP (Personal Contract Purchase) monthly repayment schemes. Toyota GB has this covered for the new Aygo with rates ranging from È89 to È119 per month for a three-year contract with a 25 to 30% deposit.

Helping to ramp up the new Aygo's fun factor are some fresh colours: Deep Blue Buzz, Red Pop, White Flash, Electro Grey, and Silver Splash. In addition, the x-cite model will be finished only in Orange Twist and the x-clusiv in Bold Black. Up to ten customisation packs for the outside and interior will also be sure to appeal in the rapidly expanding, cost-conscious yet fun-loving youth sector — plus Toyota has kept the prices low to satisfy younger buyers.

The cabin can be transformed with the INspire pack (È165) which provides surrounds for the air vents and gear shift to match any exterior colour; other interior components have a piano black finish. The mood heightens further with INtense (È165), which introduces body-colour-matched instrument panel, centre console and gear surround.

Owners can also have the 'double-bubble' roof of their Aygo covered in a contrasting coloured decal (È195), and can ratchet up the street style with optional five-spoke alloys (È499) in either silver, glossy black, or machined glossy black and white. A twin-spoke alloy design (È499) can also be specified in the same finishes with a customised centre cap and outer ring in any of six body colours.

The best-selling x-pression version sees the new x-touch multimedia system fitted as standard with its MirrorLink function for smart connection of mobile phones. New Aygo is claimed to be the first car in its sector to be offered with a rear-view camera, and there's also an optional navigation pack costing È350.

The most exciting thing about the new Aygo is its striking styling. Gone is dull and boring functionality and in has come a very attractive and sportier-looking body. The most adventurous element is the X-shaped front-end which really makes the car look distinctive.

At the tail the vertical light clusters and deep tailgate are equally sharp looking. In between there's a rising waistline which emphasises sportiness together with the chunky design which includes crisp styling creases.

Styling aside, the body is lighter than the outgoing version thanks to the use of lightweight steel; more welding points has also made the bodyshell torsionally stiffer. Toyota says this allows the revised suspension settings to provide a more consistent performance in terms of ride comfort and handling. Certainly on our pre-launch media test drive in The Netherlands the copious amounts of traffic calming speed humps were easily and comfortably managed by the new model.

All new Aygo models are powered by an updated version of the previous 69bhp, 998cc three-cylinder petrol engine that officially returns 68.9mpg in the Combined Cycle with CO2 emissions of 95g/km. There's a choice of a five-speed manual or an automated manual transmission.

The Aygo's handling appears sharp, its steering is light, and it feels dynamically nimble — all the essentials that a city car should offer day-in and day-out, but with the added capability to cope with the occasional longer trip, including motorway travel. However, for the moment we'll have to wait and see how the new Aygo copes with the UK's much tougher potholed roads.

Not so impressive is the engine's performance. For driving in towns and cities it will be fine; for cruising on the open roads it is 'gruff', tiresome and its response lacks zip. The 1.0-litre, three-cylinder petrol unit uses variable valve technology but unfortunately, unlike many of its new competitors' low capacity petrol engines, no turbocharger is fitted.

Although power has been slightly increased to 69bhp, torque is just 70lb ft at a relatively high 4,300rpm. Consequently it lacks low-down engine response. Top speed is a modest 99mph and the zero to 62mph acceleration takes 14.2 seconds for the manual and a very slow 15.5 seconds for the semi-auto.

So whilst the new Aygo exudes fun and a sporty image in its design, the engine does not — it desperately needs a modern turboed petrol unit to keep up with the likes of Ford's 1.0-litre, triple-cylinder EcoBoost unit which is smooth, responsive, quiet and fast.

To help reduce CO2 emissions, exhaust gas recirculation has been added to the Aygo unit, with the result that emissions are sub-100g/km for both the manual (95g/km) and the automated gearbox (97g/km). Both are road tax exempt — not just the first year, but every year.

As for fuel economy, the manual version officially returns 68.9mpg in the Combined Cycle; the semi-auto 67.3mpg. On test on Holland's flat, smooth and winding country roads the manual managed 51.6mpg; the semi-auto 48.4mpg.

Apart from a lacklustre and noisy engine, there's a lot to commend the new Toyota Aygo in terms of its very likeable new styling theme, the price, the specification, and the wide range of customisation options. It also scores with its low-cost finance offers and low running costs, the comfortable ride and its sharp handling.

But as for Saatchi & Saatchi's no-doubt extraordinarily expensive 'Go fun yourself' slogan, it's totally missed the gold because while the Aygo is fun to look at, it's not so much fun to drive. — David Miles