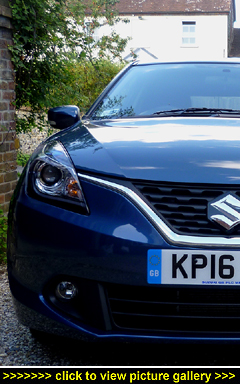 “Justifiably respected for its stylish
small cars, Suzuki has just brought
out another — its all-new compact
global-hatchback, the Baleno, that
sells in over 100 countries including
Japan and is here in the UK now...”

INTERESTINGLY, POWER CAN BE from either a new 1.0-litre three-cylinder turbocharged engine or Suzuki's first Smart Hybrid (SHVS) which combines a four-cylinder 1.2-litre petrol engine with the latest 'mild hybrid' and Dualjet technology to achieve class-leading CO2 emissions of just 94g/km.

While that's good news for our put-upon Blue Planet and will also reduce your annual road tax bill, more welcome still is the mix of economy and performance that accompanies the SHVS's green-hued CO2 levels, starting with an impressive average real-world fuel consumption of 60.7mpg (officially 70.6mpg in the Combined Cycle), a top speed of 111mph and 0-62mph acceleration in 12.3 seconds.

Measuring a smidgen under four metres from nose to tail, the Baleno offers more room than Suzuki's already very popular Swift, with extra interior space, particularly in its rear cabin, plus superior room for luggage and load-lugging. For those Suzuki fans wanting even more space, they can easily step up a size to a Vitara or S-Cross.

But first you're probably asking 'What's a 'mild hybrid'?' You'll also be wondering if it's complicated, or if you need to 'plug it in' somewhere to keep it going. All legitimate questions; and all answered easily — you need do nothing more than what you'd do driving any conventional petrol-engined car.

Basically the Baleno SHVS's 'mild hybrid' bit is a compact and lightweight (it adds just 6.2kg to the Baleno's overall weight) system that incorporates an Integrated Starter Generator which assists the engine during pull-away and acceleration. The SHVS system only uses the Baleno's conventional engine starter motor when first starting from cold; at all other times it uses the ISG unit for smooth and quiet engine restarts.

The ISG functions as both a starter motor and generator, efficiently generating electricity whenever the brake pedal is depressed (and storing it in a compact lithium-ion battery located under the front passenger seat) as well as recharging the conventional 12-volt battery.

Also helping the SHVS (Smart Hybrid Vehicle by Suzuki) to reduce fuel consumption is an engine stop-start system which stops the engine for longer periods than other such systems by cutting power at speeds of up to 10mph (many such systems wait until the car comes to a complete stop) whenever the driver's foot is removed from the clutch pedal and the gearbox is in neutral. No delays though when you need to get going again as it restarts the engine the instant the clutch pedal is depressed.

Looks-wise, the Baleno's nose and bold, fist-sized 'S' badge leaves you in no doubt that this is a Suzuki; projector headlamps cut into the front wings and bonnet bracket the swoopy main grille, which combined with the wide stance creates a nicely sporting front-end. Once past the strongly-defined wheelarches, chromed beltlines rise up to meet the large LED rear light units that book-end a neat 'sports touring'-styled tailgate.

All the clever tech aside, what matters more for most owners will be the Baleno's cabin. Swing open the driver's door (no key required courtesy of a 'smart' entry and start system) and you'll discover a welcoming, nattily laid-out cabin that's surprisingly generous on personal space — if you're a front passenger you'll definitely appreciate just how much you can stretch out without being nagged to move your seat forward by somebody seated behind you.

The agreeable ambiance is made better by deep side windows that keep the cabin light and airy. Echoing the front grille treatment, the deep fascia dips down to the main centre tunnel and gearlever.

In line with the main instrument cluster and sited top-dead-centre of the dash is a large seven-inch touchscreen display that enables intuitive operation of the audio system, 3D navigation and smartphone — it can even be operated while wearing gloves!

Immediately beneath this is the climate control panel (and Yes, it has a pollen filter); it's a foolproof set-up with minimal switchgear and helps ensure the Baleno is one of those cars that you can, even on first acquaintance, just get in and drive.

The driver's computer is a 4.2-inch high-definition colour LCD display that's flanked to the left by the rev-counter and to the right by the speedo; it shows a range of trip data (the all-important range and average mpg, etc) and includes a compass along with various supporting graphic performance-oriented information. Conveniently, the voice button on the steering wheel lets you operate not just the phone but the SatNav, media and audio too.

Upholstered in a fabric that will be agreeable in the summer and warming in the winter, the seats are well-proportioned, nicely bolstered and provide decent support. Both have height-adjustable belts while the driver gets a height-adjustable seat-base and plenty of headroom plus a multifunction three-spoke wheel wrapped in smooth satin black leather that adjusts for both tilt and reach and contributes to the first-rate driving position.

The engine Start-Stop button is sited to the right of the wheel rim on the fascia, and the blue-lit faces of the main dials in the instrument cluster are both easy on the eyes and add some sparkle to the black-themed cabin. A trad 'pull up' handbrake will please plenty of Baleno drivers; more so the slick-changing gearlever and the well-sited left foot rest for when 'in the cruise'.

Neither will the driver or passengers go short of places to tuck all their personal 'stuff' aboard the Baleno thanks to bottle-holding door pockets, plenty of open trays and cupholders and a bin under the armrest between the front seats.

Damped grab handles are there if needed although most passengers will no doubt use them not for aiding their exit or entry but for strap-hanging whilst travelling — something that seems to be on the increase.

When driving above 3mph the Radar Brake Support system alerts the driver to any possible chance of a collision with the vehicle ahead. Ignore the audible and visual warnings and, if a collision is unavoidable, it applies the brakes automatically. The warning can easily be set for either Far or Near distances and the milliwave radar technology also enables it to work at high speeds, in darkness, and in rain or other bad weather. Another pair of 'eyes' 24/7 is always good news!

The rear cabin is a big surprise… precisely because it's so big. Getting in and out is easy and back-seat passengers sit about six inches higher than those in front on a comfy bench-base while relaxing back against equally comfy backrests. Along with decent headroom there's plenty of foot room and rear passengers can stretch their legs out full length, with generous knee room when sitting normally. The minimal floor tunnel means three adults sitting side-by-side is politely doable. Accommodating rear outer armrests plus large bottle-holding door pockets all add to the benefits of being chauffeured anywhere in a Baleno.

The regular-shaped boot is also more than averagely obliging, swallowing 320 litres of luggage or shopping. But it doesn't stop there — fold down the rear seatbacks and you'll create a 756-litre loadbay. For more serious load-lugging you can load all the way to the roof, which stretches the cargo capacity to an impressive and versatile 1,085 litres.

Even better, the boot features a two-tier arrangement: with the floor set to its higher setting and the seatbacks folded flat the resulting loadbay floor is seamless with just a short drop down over the mid-thigh-height rear load sill; alternately, with the floor at its lowest, there's useful extra inches available for items carried in the boot.

But there's even more versatility: the boot floor panel folds in two and stacks at the end of the boot area to divide the loadbay widthways. And if you wish to use the lower section for out-of-sight storage while retaining a full standard boot above, the rearmost section of the boot floor is effectively a full-width lid that lifts for access. Beneath all that is a tyre repair kit. Another convenience 'plus' — the tailgate also has keyless 'touch' locking/unlocking, just like both front doors.

A new-generation weight-saving platform underpins the Baleno, helping it achieve both increased rigidity and improve overall crash safety alongside a very low kerb weight (935kg for the 1.2 SHVS), which also makes it the lightest hatchback amongst its competitors.

All of which also helps the handling dynamics: grip is predictable and it's an easy car to handle whether you're just pootling en famille or getting to the church on time. All you really need to know is that the Baleno does everything you need to a standard you'll be happy with in the riding, handling, steering and braking departments.

Plus the petrol engine's bhp:torque partnership (88bhp backed up by 88lb ft) is more than enough for its weight to ensure unstressed cruising and enough pick-up in the higher gears to save on downchanges. At town and country speeds the 1.2-litre unit's always agreeably nippy and easy to keep 'in the zone' thanks to a clean-changing, five-speed gearbox.

Go for the 'mild hybrid'-enhanced Baleno hatchback and you'll get more than a mild improvement over other superminis, particularly in the space stakes. Add in a responsive engine, a genuine 60mpg, a high-spec kit-list plus a keen price and you'll be glad you signed on the Suzuki dotted line. ~ MotorBar