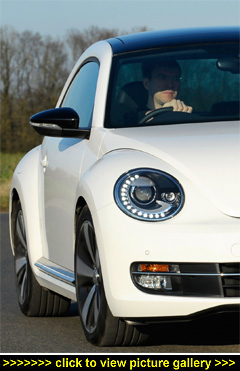 “Welcome to the Volkswagen Beetle.
That’s the new Beetle, as distinct
from the ‘New Beetle’ which is now
the old Beetle...”

CONFUSED? ER, SORRY ABOUT THAT. I'm still getting my head around the naming strategy for VW's latest — 2012 — Beetle, which has just arrived on UK shores.

It's a Beetle, but not as we know it. The just-replaced 'New Beetle' was very much aimed at the ladies, what with its cutesy-curvy styling and a flower vase in the dash. In contrast, the new 'just call me Beetle' Beetle has 'manned' itself up.

For a start, it sits lower to the ground with more of a coupe look than a hatchback. And as for the flower vase, well, you can look but you won't find one. Sales of sunflowers around the globe will no doubt be tumbling…

But down to business… let's get the beastie started. My test machine was a 1.2 TSI — the entry-level petrol-drinking powerplant with 103bhp. Despite the relative lack of power, owners really won't feel short-changed by the performance.

There's a kick from the turbocharger to keep things flexible at low revs, and because this is an engine that loves to rev, it's more than happy spinning away at the upper end too. Actually, it's an all-round-sweet-spot engine that totally belies its modest on-paper figures (0-62mph in 10.9 seconds).

And I'd go so far as to say the 1.2 TSI is easily the pick of the engines in the range — although, sadly, you can't buy one for the moment because the factory in Mexico is so flat-out that the only right-hand drive cars available during 2012 will be 1.4-litre twin-charged petrol with 158bhp and a manual 'box.

The DSG six-speed semi-automatic gearbox that's standard-fit in the 1.2 TSI is slick, quick and smooth — better still, it has a Sport mode that keeps the engine spinning in the sweet zone at speed. However, it does lack VW's normal DSG steering wheel 'paddles' for manual shifts — instead, you must push-pull the gear lever.

How does it behave on the road? The answer is Very Much Like A Golf. Which is not too surprising since that's basically what underpins this latest Beetle. For the most part, that's good news — and the new-shape model is certainly way more fun than the one it replaces.

The handling is assured; it feels safe and predictable. Is it a driver's car, though? Not really. The steering feel doesn't have that precision or confidence that enthusiastic drivers will crave.

The suspension, while stiff, gives a comfortable enough ride quality — at least it does if you select the right wheels. In Sport trim, the suspension is set up very stiffly, and while 18-inch alloy wheels and low-profile tyres might look good, they can make life quite crashy. My advice: stick to the retro-feel tall rubber.

Inside, there's decent space for four adults and with much more headroom than the previous Beetle provided. The cabin still narrows quite a lot in the rear; leg room for taller people might be tight. There's a lot more boot space than before but it's still much smaller than a Golf. And while it's easy enough to fold down the 50:50 split rear seats, you're left with a step in the load floor.

Visibility will be an issue for some drivers: the rear pillars are huge; the interior mirror is tiny; and there's no rear screen wiper.

Three trim levels are available: Beetle, Design and Sport. I drove the Design, which looked very retro with its 1950s-style Denim Blue paint scheme and chromed hub caps (when was the moment when designers abandoned these cool-looking things?).

And VW has revived the original Beetle's flip-up dashboard glovebox — another neat retro touch, even though the glovebox itself would struggle to hold a pair of stringbacks.

My test Beetle was also fitted with another item of achingly cool hardware: a Fender sound system. Yes, the same people who tooled-up Jimmy Hendrix are now also making audio systems for Beetles at Ł495 a pop, including a subwoofer in the boot and illuminated speakers. Cool, but not in fact terribly hi-fi — companies like Bose do car sound systems so much better.

However, the Beetle is not all about cute retro charm. Choose the right Sport trim grade and the right options and you can end up with a pretty masculine looking machine. With chunky alloys and a rear spoiler, the Beetle even starts to look a bit like a miniature Porsche 911 Turbo — no coincidence, perhaps, since the original Beetle and 911 were much closer related than kissin' cousins.

Even with these butch tweaks, the Beetle may still look too cute and retro for some customers. The more masculine target market may still regard it as not sporty enough, but to satisfy them VW has the Scirocco. For everyone else, the Beetle has a charm and a style that's got undeniable smile appeal. — Chris Rees