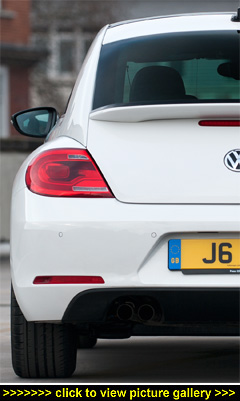 “In it’s latest incarnation, although
very retro in design, the Beetle is
a much more muscular, even macho,
three-door coupe-styled model...”

PRICES ARE TEMPTING for this new Beetle — starting from Ł16,490 for the 103bhp 1.2 TSI turbocharged petrol version (with a standard-fit seven-speed DSG automated gearbox) and topping out (for the moment) at Ł21,220 for the 157bhp 1.4 TSI twin-charge petrol unit with a six-speed manual transmission.

More costly and more powerful units will be introduced to the line-up in due course, as too will a cabriolet version. However, due to the world-wide demand for 1.2-litre engines, UK deliveries (from April this year) will only be of the 1.4-litre version.

This third generation Beetle runs with a front engine, front-wheel drive, three doors and four seats. It's also a design break from the style and proportions of the 1998 generation and has a longer bonnet, a more steeply inclined windscreen, coupe-like side profile, a longer roof (for reasonable back seat headroom), and the characteristic sloping clamshell tailgate. Top models feature a rear bootlid spoiler.

This 2012 Beetle is longer and wider, too, with wide track widths and pronounced mudguards and side sills, but it is still sports a retro theme.

At the same time the new design shows off some real 'steroid growth' — it's a totally new image which will appeal to male drivers far more than the previous models which were considered very 'girlie'.

The muscular retro theme continues inside, enhanced by modern treatments. I love the paint finish to the full-width fascia that matches the exterior body colour — retro but modern. It's not going to appeal to mainstream buyers but the latest Beetle will undoubtedly find many older friends.

VW has a policy of not saying how many cars they expect to sell of any of their model ranges. More than 5,000; that's my guess as to how many will be snapped up each year by drivers who find this thoroughly modern Beetle absolutely irresistible. It's also a car for couples who want more than just a sensible hatchback or saloon; who want their motor to make a statement.

The new model's launch engine (tested here) is a 1.4-litre petrol unit with an exhaust-driven turbocharger twinned with a supercharger. The turboed 1.2 petrol engine arriving in 2013 is paired with a seven-speed DSG twin-clutch auto 'box. Other variants get six-speed manual gearboxes.

Yet another option is the Fender sound pack — developed in conjunction with the legendary Fender electric guitar company, it's an audiophile's delight that serves up a 400W output and comes with a subwoofer and switchable three-colour illumination surrounding the front speakers.

I also had the opportunity to drive one of the 103bhp 1.2-litre petrol-powered Beetles which are not due in the UK until 2013. With its standard seven-speed DSG autobox and its Ł16,490 price tag it will, for most people, be the right choice. 111mph is the top speed and 10.9 seconds is all it needs to hit 62mph from standstill. And this all from a 'lowly' 1.2-litre engine. 47.9mpg is the official combined figure and my test drive saw 42.5mpg. Road tax is Ł115 a year and company car users will pay 17% BIK.

But you don't have to overspend: I like the standard Beetle spec right down to the retro-styled 16-inch steel wheels with wheel trims! Plus the ride comfort is better than with the Design's 17-inch alloys.

All Beetle models come with AirCon, power windows and door mirrors, multifunction computer, DAB digital radio, a good sound system, retro styled interior trim along with a full set of airbags, an electronic handling programme and traction control. Luggage carrying is taken care of by a 310-litre boot that converts to a 905-litre loadbay when you fold down the back seats.

Reasons to get with the latest Beetle include the retro style, it's beautifully made, feels solid, it's roomy and well equipped, looks great inside and out and makes a strong statement about your individuality.

While the Beetle is not as dynamically accomplished as a thoroughbred sports coupe, it is more charming. And, as already noted, specify larger wheels and you'll get a firmer and less controlled ride.

However, when all's said and done, it's a smart package inside and out. And I want one! It's already on my shopping list for when the 1.2-litre models arrive next year. And I can't say fairer than that. — David Miles