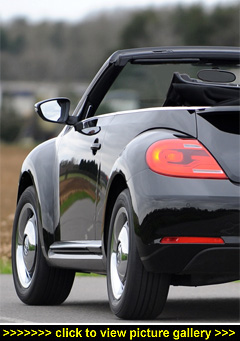 “Fresh air costs extra! Cabriolet
Beetle models are Ł3,000 more costly
than their fixed-roof Beetle Coupe
counterparts. Prices of the new retro-
styled two-door drop-tops start at
Ł18,405 and run to Ł28,335. But that
buys you a car totally unlike any
other car on the road...”

HOWEVER, the engine line-up mirrors that of the Beetle Coupe — all are direct-injection turbocharged four-cylinder units: three petrol (1.2, 1.4 and 2.0-litre) and two diesels of 1.6 and 2.0-litre capacities. And, depending on the engine chosen, there's the choice of manual and automatic transmissions.

There is the usual hierarchy of trim levels — Cabriolet, Design and Sport. But for its launch there's the added choice of three special edition specs created to promote the retro design. These are the stylish 50s Edition, the cool 60s Edition and the elegant 70s Edition.

The latest Beetle Cabriolet made its show debut late last year but it's now in UK showrooms and ready for customers to buy. It's based on the almost-as-equally-new front-engined Beetle two-door Coupe and shares the elongated 4,278mm length, muscular styling, signature outboard wheelarches, 'eye styled' headlights and clamshell front bonnet.

Like the styling of the original rear-engined Beetle, the latest incarnation has a unique appearance — there really is no other car on the road like them in either Coupe or Cabriolet form.

Both the Beetle Coupe the new two-door, four-seater Cabriolet will be bought because of their styling rather than for their practicality. With the Cabriolet, access to the rear seats is not great and the rear legroom is tight. Headroom is fine but rear seat passengers could feel claustrophobic with the roof raised.

The electrically-operated multi-layer fabric roof, which incorporates a glass rear window, can be folded down in 9.5 seconds with the car being driven at speeds of up to 31mph; and it can be raised in 11.0. A tonneau is provided to cover the roof when it's folded down — unfortunately the roof does not disappear out of sight when dropped. Like most pram-type canvas roofs, it sits above and behind the rear seat head-restraints so driver visibility is restricted.

With the roof up the interior seemed well insulated from traffic noise and with it down there's not too much wind buffeting. The boot holds 225 litres of luggage and the rear retro-style bench seat can be folded to increase load space — up to 905 litres. That's useful space indeed for a stylish wind in the hair 'cruising' holiday.

The new Cabrio pioneers the use, in the latest Beetle, of a more expensive multi-link system that improves handling and control functions. People who buy one will not care too much about its dynamic driving credentials but under the skin it uses all the highly rated Volkswagen Group components such as the platform, engine and drivetrain technologies so it will be durable, reliable, fuel efficient and cost effective to run.

For most retail Cabriolet customers the 1.2-litre 103bhp turbocharged petrol engine is, I feel, the power unit of choice. It's free revving, responsive, smooth and cheaper to buy and run and can be had with either a manual or automatic gearboxes.

Though the 158bhp 1.4 turboed petrol engine will apparently be more popular because of that extra bit of acceleration performance, its fuel economy is not as good, the emissions are higher and there is no automatic gearbox option.

The 103bhp 1.6 TDI diesel unit is likely to appeal most to higher mileage drivers although the Beetle Cabriolet isn't that sort of high-use car. The 208bhp 2.0 TSI petrol and 138bhp TDI diesel units probably rule themselves out for most retail buyers because of high purchase costs which make these versions harder to justify — after all, the latest Beetle is about style rather than performance.

Although VW didn't have the 1.2-litre TSI 103bhp engine available at the press launch for us to try, I have previously driven the Beetle Coupe with this unit in both manual and auto transmission forms and to me it would be the power unit of choice.

Given its laid-back, top-down retro styling, I'd also go for the DSG auto 'box which gives the Cabriolet with this combination of engine and transmission in the most popular Design trim an on-the-road price of Ł22,245 — which I think is good value. The power output looks a bit weedy on paper but thanks to its turbocharger really it isn't when tried.

But we did get to sample the new Cabriolet with the 1.4-litre TSI, turbocharged petrol unit (158bhp and 177lb ft of torque) with the standard-fit six-speed manual gearbox — if the Design spec is chosen this comes with a Ł22,690 price tag. However our test car had the launch special 50s Edition trim which pushes up the price to Ł24,895.

Top speed of this 158bhp drop-top is 128mph. More appropriately, standstill to 62mph takes an impressively low 8.6 seconds due to its responsive torque output of 177lb ft delivered from only 1,500rpm. Officially this unit will return 41.5mpg — on my short test drive around the country roads of Wiltshire the figure was 32.7mpg. CO2 emissions are 158g/km so road tax is Ł175 per year.

The specification for all Beetle Cabrios looks pretty good with the base version only let down by its steel wheels. Talking of wheels, available as standard or as options, are a wide range of styled wheels from alloys through to the truly retro VW multi-holed wheels capped with chromed 'VW' centre hubcaps.

The cabin of the Cabriolet is very retro in its styling and, strongly reminding us we're in a Beetle, there is the option of various colour finishes for the dash. The most popular Design spec level has cloth upholstery but with leather clothing the multi-function steering wheel rim and gear and handbrake levers. Included as well is Bluetooth, a touchscreen, DAB radio, power-operated roof, electric windows, AirCon, and a set of 17-inch alloys. The 1.4 TSI petrol-powered version gets an electronic differential.

The 50s Edition adds those fantastic retro wheels, leather upholstery, heated front seats, heated windscreen washer jets, cruise control, sports instruments, front and rear parking sensors and various tweaks to the retro style of trim. The bespoke specification rises as you climb the ladder of models, which can be customised to fit your requirements, with the likes of a Fender sound system from the legendary electric guitar firm of the same name.

Against? Lacks the ride quality and handling finesse of a VW Golf Cabriolet, too-cosy rear seat passenger space, restricted rear seat access, and poor rear visibility with the roof down. But if what you want is distinctive retro styling, a wide range of models and trim options to choose from, strong and fuel-efficient engines and attractive prices then this Beetle could definitely make you feel Glad All Over.

Despite our changeable weather, which can go from floods to sunshine in a matter of days, the UK remains the second largest market in Europe (after Germany) for cabriolet and convertible sales. So there's proven demand for such niche models as the new and smartly retro soft-top Beetle Cabriolet. Car-lovers for whom style matters most won't be disappointed. — David Miles