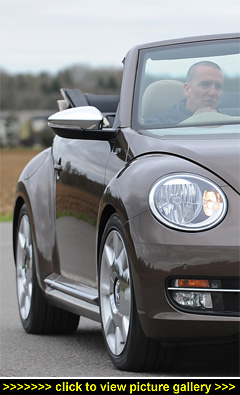 “If ever a real-life Beetle was able
to drive as well as Herbie, Disney’s
anthropomorphic racing Beetle —
The Love Bug, Herbie Rides Again,
Herbie Goes to Monte Carlo, Herbie
Goes Bananas, and Herbie: Fully
Loaded — it would be the new, latest
generation model...”

TO SAY THE BEETLE HAS 'MANNED UP' over successive generations is no lie. Once seen as a bit of a girlie's car, or condemned with faint praise as a 'rebodied Golf', there's no question that the current Beetles now cut the mustard for the guys as well as the gals.

Not only can you have a Beetle that's almost as talented as its Walt Disney counterpart, but you can even drive one that has an unmistakable Seventies look — the 70s Edition as tested here.

One thing you will have to manage without is the dash-mounted flower vase. Not, I suspect, a problem for the guys now getting behind the sporty wheel of a drop-top Beetle…

Externally, framed by muscular outboard wheel arches at each corner, the latest Beetles are longer, lower and wider — and with a spoiler bringing up the back and fronted by a full-width slash of a low grille, they're decidedly more sporty looking.

On sale alongside the standard Cabriolet are three special editions, each harking back to a specific decade: a black-painted and chromed-up 50s Edition; a hip Denim Blue (or Candy White) 60s Edition; and, as tested here, an equally distinctive 70s Edition notable for its super-cool wheels and Java paintwork.

But can you 'go bananas' in one? Actually, pretty much so although the latest Cabrio's forte is playing the laid-back open-to-the-sky cruiser. If you really must press-on, it can be manhandled fairly aggressively without risk.

It may have lost its metal top but its been beefed-up under the skin and is very rigid for a convertible. Furthermore, being based on the competent (and only recently superseded) Golf Mk6, all the handling essentials — including a sophisticated multi-link rear suspension set-up, an Electronic Stabilisation Programme and traction control along with VW's Electronic Differential Lock (for improved traction and handling) — are all present and correct.

Drive a Beetle Coupe back-to-back with a Cabrio and you'll be surprised to find that their handling abilities are pretty close. Like most of the current crop of new cars, the Beetle's direct steering is electrically-assisted — and none the worse for it, serving up decent road feel. Overall, a tidy handler. So, Yes, you can go bananas. And with no fear of slipping up.

Equally satisfying, it rides well on its standard-fit 235/45 18-inch rubber, staying composed over poorer blacktop. Even potholes won't cause you — or your passengers — to grit your teeth.

The six-speed manual 'box is equally pleasing to work with, especially when you're making full use of the turbodiesel's hefty torque. Do so and the 0-62mph sprint comes up in 9.9 seconds; keep accelerating and you'll top out at 122mph (really, that's as fast as you'll ever want to go topless in any car). Cruising the motorways down to Monte Carlo at the legal limit, top up or down, is altogether very debonair.

Between 1,750-and 2,500rpm, 236lb ft of torque is what the Beetle's 1,968cc TDI unit delivers. In layman's terms that means not needing to rev the four-pot hard in everyday driving. However, that's not to say that there isn't more than enough poke to guarantee some vim when your right foot pushes down hard. Diesel it may be but — another plus — it also runs quietly.

An added bonus for drivers who want the satisfaction of shifting for themselves and who have no desire to go the auto route is that the TDI's low-down pulling power means less frequent gear changes. Also appreciated is the leather trimmed gearknob — so much nicer during the winter moths than a metal knob!

And if you prefer a slow-descending needle on your fuel gauge, then you'll love this bug. The 2.0-litre turbodiesel is pretty sparing with fuel — officially it will return 44.1 around the houses, 64.2 touring and 55.4mpg combined. Our real-life figure after a week's enthusiastic beetling around: 47.1mpg.

Being a cabrio, the heart of the 70s Edition is, somewhat unsurprisingly, its cabin. Peel back the three-layer beige fabric hood — at the press of a button it folds and stacks in a fast 9.5 seconds (rises again in 11) at road speeds of up to 31mph — and you'll find an attractive beige interior.

As we said at the beginning, these sportier-looking Beetles are lower, longer and wider. The consequences are all good: more headroom, more shoulder room and more legroom. Those up front are absolutely guaranteed comfort and space — the shapely leather seats are well-bolstered and supportive, come with lumbar support and adjust for height. Combined with decent visibility and plenty of steering wheel adjustability, drivers of all sizes will be able to set a fine driving position with no problem.

One thing you can be sure of with any VW is a set of cleanly laid-out instruments and controls, and the Beetle is no exception: whatever you need is exactly where you'd expect to find it. Dials are crystal clear with crisp white numerals and sharp red needles. In the 70s Edition you get some extra gauges: turbo boost, stopwatch, and oil temp — mounted centrally in a pod along the leading edge of the fascia.

A small rev-counter sits to the left of the speedo, which incorporates a comprehensive driver's information display — scrolling through the data is easily done by using the thumbwheel on the multifunction wheel. Thoughtful touches like this are what make the Beetle so nice to drive as you can concentrate on the physical act of driving without secondary distractions.

The standard-fit sound system (with touchscreen, DAB digital radio / MP3 compatible six-CD autochanger and eight speakers, SD card reader, aux-in socket and MDI multi-device interface with USB and iPod cables) is fine and well up, audibly, to top-down motoring; its easy controls are second nature to use on the move.

The power-operated fabric roof is well-engineered (multi-layers and a glass rear window add to the refinement) and a tight fit when raised, keeping sound levels on a par with the all-of-a-piece Beetle coupe.

Folded down, there's good protection from the wind and conversations can be held with your passengers without any raised voices. There's a tailored tonneau to cover the roof when it's stacked on the rear deck behind the rear seat headrests (for the record, some drivers might find the folded back roof restricts some of their rearward visibility).

Those who like to be able to get their top up fast, even when they're rolling, probably won't bother to use it. Not a problem as it looks fine 'naked'.

A wind deflector to minimise buffeting, and which stows neatly in the boot, is an extra-cost option but well worth the Ł235 it costs for those long-haul, top-down trips.

Those seat in the rear will find getting there (and getting back out) no hassle thanks to good-sized side doors and front seats that tilt-and-slide smoothly. Two adults (not three) are catered for; youngsters will love it. While legroom is not humongous and you sit pretty upright, your friends will still be on speaking terms with you after travelling in the back.

Luggage-wise the Cabrio's boot takes 225 litres but, die to the smallish boot opening, squishy weekender bags are the preferred choice. Unexpectedly, the rear bench folds down to provide more luggage space — taking the litre count to 905. More than enough for that cruisin' holiday.

Cabin storage is also practical, thanks to the extra 'Beetle bin' upper glovebox that supplements the main glovebox, a number of deep open trays, front seatback pockets, a cubby under the flip-up armrest between the front seats, and usable door bins.

Along with wind-in-the-hair fun, the 70s Edition Cabriolet Beetle serves up totally stress-free driving with almost teetotal levels of fuel consumption. All that plus you'll be driving an individualistically-retro, four-seater drop-top. The name's Herbie! — MotorBar