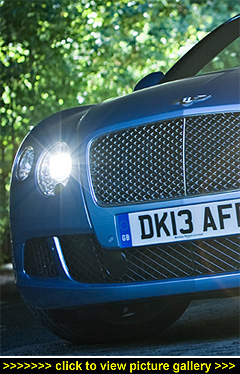 “Big, Bad Bentley. Somehow that
phrase just wouldn’t leave my head
as we were taking the photos for
this feature. Then the voice simply
got louder with each passing mile
of my road test — welcome to the
fastest four-seater in the world...”

THE ADDITION OF THE WORD 'SPEED' to the title of Bentley's (hardly sluggish) Continental GT brings with it an extra 49bhp of power. The regular 6.0-litre 12-cylinder GT has a substantial 567bhp; the Speed bursts boldly into supercar territory with all of 616bhp. That's as much power as a McLaren F1 was pumping out in the 1990s.

Yup, 616bhp makes this one belter of a beastie. Hoof the accelerator hard into what must be the deepest pile carpets in the western world and the big Conti takes off with an astonishing alacrity that utterly belies its weight (which, by the way, is fully two-and-a-half tonnes).

It feels like The Rock has been issued with a jet pack. You'll get to 62mph in just over four seconds, while the 100mph barrier is stormed in a mere 9.7 seconds. Maximum torque (a monumental 590lb ft) arrives at 2,000rpm and the engine continues to deliver that peak figure right through to 5,000rpm. Going quickly was rarely so effortless.

The eight-speed automatic gearbox takes up the strain of those 616 stampeding horses and delivers them as a cohesive, super-smooth surge of thrust. Switching to 'Sport' mode sharpens up the throttle response and allows gearchanges at higher engine speeds — it also lets the auto 'box change down from eighth gear directly to fourth if need be.

You can use the paddles behind the steering wheel to change manually, but I suspect few owners will because the paddles are of the don't-move-with-the-wheel kind, so manual shifting isn't as easy as it should be.

Besides which, the Speed's special close-ratio autobox works so well in non-manual mode, it's best just to enjoy it, like racing on PS3 Gran Turismo without the phaff of gearchanges.

The Speed's uprated chassis, compared to the regular Continental, makes it very definitely sharper to drive. The self-levelling suspension is 10mm lower, the bushes are stiffer, the anti-roll bars are uprated and the steering is retuned.

With permanent four-wheel drive as standard, this is one very sure-footed car. However, it isn't what you'd call a trackday special — the sheer bulk of the machine means that the tyres (despite their massive 275/35 dimensions) start to squeal in objection if you really press on.

There's also surprisingly little driver controllability in terms of chassis settings. Even VW Golfs these days have multiple chassis modes to fiddle with; Bentley offers you the chance to select one of four damper settings, and low- or high-speed tyre pressures. And that's it. That said, the ride quality remains excellent whatever mode you're in.

Unquestionably, this car's natural environment is big, fast roads: sweeping A-roads across the Lake District; sun-steeped highways hugging the southern coast of France; that deserted road in South Africa they always use in car adverts. But most of all, the Speed is designed for those stretches of unrestricted autobahn in Germany, where Speed is truly King.

Speaking of high speed… for the record, Bentley says the GT Speed Convertible will do 202mph. And that's a record, too, because this is the fastest four-seater convertible in the world. The sensation of acceleration when you're already at high motorway speeds is genuinely eyebrow-raising.

I didn't get to try the top speed out myself with the roof down (I wonder if anyone actually has?) but I did try a few al fresco high-speed runs. My rear-seat passenger for the experiment said he felt as if he was being sucked out of the seat at 70mph, so at 200mph things must get very interesting indeed.

Front-seat passengers need not worry about being buffeted thanks to a wind curtain that fits behind the front seats. And the roof is a fantastic soft-top, with four layers to keep the elements and noise firmly out of the cabin, and an easy-to-use switch to lower the top even when you're driving at low speeds.

The best thing about the GT Speed for me is the interior. The ambience is old school luxury, laced with hints of performance car. So you get swathes of perfectly-stitched leather set off against gloriously machined dark-tint aluminium. And did I hear a single squeak, rattle or buzz in my week with the car? I did not.

It's all quite subtle, too, with just a few hints to distinguish the GT Speed. Its matrix radiator grille and bumper air intakes are in a dark-tint chrome finish; the 'B' badge on the front-end is on a special black enamel background; the alloy wheels are unique; the elliptical exhaust tailpipes have a 'rifled' interior; the inlet manifold is black; and there are Speed-monikered sill plates.

Bentley says the current generation W12 engine delivers better fuel economy than before. I shudder to think what it would have been had the improvements not been made because my average in the car was 12.4mpg, and that was mixing in plenty of gentle wafting with the sort of spirited motoring that you simply can't resist as the driver of a GT Speed.

However, at the end of the day all resistance is futile: the big, bad Bentley simply pummels you into submission, cosseting you in perfect luxury and transporting you to a parallel universe of unbelievable performance for a car as divinely comfortable as this. — Chris Rees