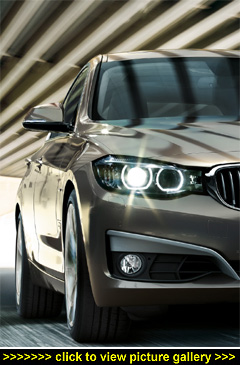 “BMW’s best-selling model range
globally is the 3 Series; in the UK it’s
the best-selling premium brand car.
And now another version has joined
the line-up — the five-door coupe-
hatchback-styled Gran Turismo...”

THE LONGER WHEELBASE GT (or Gran Turismo) is roomier for rear seat passengers compared to any 3 Series model ever, and offers more load space than even the latest 3 Series Touring. On average the new GT carries a Ł1,300 price premium over the comparable Touring model, with prices ranging from Ł28,830 up to Ł38,470.

Initially the first-ever 3 Series GT will be available with three petrol engines (320i, 328i and 335i) and two turbodiesel units (318d and the best-selling 320d), and up to four trim levels.

Together, these engines will account for 80% of GT sales in the UK. However, in July this year additions to the range will be the 325d, the 320i xDrive 4x4 and the option of M Sport trim. More xDrive versions will be added in 2014.

The GT is available with the main SE spec but there's also Sport and Modern variants (costing Ł1,000 more) and a Luxury specification that is priced at Ł2,000 more than the SE level. And, naturally, there's a huge array of options that will push the prices up further.

BMW are predicting that the majority of GT sales will go to conquest customers although some current 3 Series owners will find the increased rear seat legroom appealing; and it's likely that some 5 Series drivers — 'empty nesters' and company car drivers wishing to reduce their Benefit-in-Kind tax — would also downsize to the GT.

The whole point of the 3 Series Gran Turismo is its size and styling: hence the sportier, taller and longer five-door body with a coupe-look side profile. It also has a number of unique styling points over other 3 Series models, such as headlight design, under front bumper tweaks in the form of air vents, airflow outlet vents in the lower side of the front wings, a rising waistline and coupe roofline, sculptured lower side door panels, a steeply raked tailgate with an automatic raising and lowering rear spoiler but, unfortunately, no tailgate wash/wipe. The reason, I was informed, is that "a rear wash/wipe is not in keeping with BMW's coupe DNA"!

At 4,824mm in length the GT is 200mm longer than the 3 Series Touring. The new GT is also 1,489mm tall (81mm more than the Touring), so despite its coupe profile headroom is plentiful even in the three back seats.

For better visibility and comfort the seats are set 59mm higher than in the Touring, but it's the rear seat passengers who benefit most because the GT's wheelbase over the Touring models is 110mm longer so rear seat legroom — the Achilles' heel of the 3 Series — is increased by 75mm to make it almost the same as a 5 Series saloon. The transmission tunnel does, however, still restrict foot room for a centre rear seat passenger.

The three rear seats, with folding head restraints, can be split 40:20:40 and reclined in 15 stages; they can also be easily folded down to increase cargo carrying space. The GT's load capacity is more than that available in the 3 Series Touring and with all the seats in use there's 520 litres for luggage; fold down the seats and this increases to an impressive 1,600 litres (that's 25 to 100 litres more than 3 Series Touring models can manage). Plus the GT's tailgate is power-operated, opening to reveal a wide boot aperture for easy loading.

There is no spare wheel, not even as an option because the space under the boot floor is taken up by extra fixed storage compartments.

To showcase the many and varied extra-cost options available, my fully-loaded 318d Sport Gran Turismo test car (which has a basic price of Ł30,910) had an on-the-road price of Ł41,945. Not many people will add that many options to their GT, but they could if they wished.

Back to earth — to Tuscany's winding hilly roads, to be precise — for my first drive in the new 3 Series Gran Turismo. Unfortunately the main-selling 320d SE 184hp four-cylinder turbodiesel models (returning an official 57.6mpg with CO2 emissions of 129g/km) hadn't arrived so the next best-selling version, the 143hp turbodiesel 318d, was my choice for a GT experience. In SE spec this model costs Ł29,910 but the Sport pack version as tested bumps that up by Ł1,000.

The 2.0-litre, four-cylinder variable twin-scroll turbodiesel with common-rail injection (and all the usual BMW EfficientDynamics fuel-saving and power harvesting technology) delivers a healthy 236lb ft of torque from under 2,000rpm and is a responsive unit despite its fuel-saving sixth gear ratio in the manual 'box.

Top speed is restricted to 130mph with the zero to 62mph dash taking 9.7 seconds. With that comes an official Combined Cycle figure of 62.8mpg — a figure nowhere near matched on the hilly and winding but relatively traffic-free roads of Tuscany with a modest 41.8mpg return. But the CO2 emissions are just 119g/km so road tax will be cost nothing in the first year and then only Ł30 from year two onwards.

The big question about the Gran Turismo is does its extra length and more interior space detract from the impressive handling and agility qualities for which the 3 Series Saloon and Touring models are renowned?

Both versions are recognised as the best performing compact executive cars available today, and the GT addition doesn't really change that to any great extent.

The GT's handling is not quite as sharp and agile due to the extra weight of the elongated bodyshell; and the longer wheelbase doesn't make it quite as precise during cornering or when travelling over undulating roads.

That said, the ride comfort at high cruising speeds is impressive especially if the suspension setting is left in the Comfort mode. The GT is not a sports saloon or estate; it's a Gran Turismo meant for touring, and long-legged cruising on open roads suits it best.

There did seem to be more road noise intrusion from the tyres and the rear suspension coping with potholes — mostly due to the fact that it's a hatchback so the load area is not completely insulated from the cabin. Whatever the roads being travelled, rear seat passengers will enjoy the significantly improved leg and headroom and the extra load space is always useful.

So while the GT is not as agile and precise in the handling departments as the 3 Series Saloon and Touring cars, you do benefit with more rear seat passenger legroom and more load space than a 3 Series Touring estate, plus you gain a more commanding driving position and better kit. — David Miles