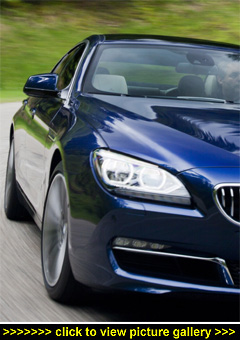 All models use an eight-speed automatic transmission, and all come with a full array of BMW's award-winning EfficientDynamics technologies, including Auto Start-Stop, ECO-PRO (adjusts the accelerator and auto gearchange to 'softer' fuel-saving settings), and the extensive use of weight-saving aluminium for the body construction. Trim can be either SE or M Sport (expected to be chosen by 8 out of 10 UK Gran Coupe customers) and there's a long list of extra-cost options.

These Gran Coupe models will be comparatively rare: just 700 available in the first full year of UK sales. By comparison, for the same period, the 6 Series Coupe will have approximately 1,000 UK sales with 400 for the Convertible.

The Gran Coupe's delightful proportions are truly those of a classic grand tourer, characterised by a long bonnet, a sweeping coupe roofline and a four-door passenger compartment set towards the rear of the car.

Flared wheel arches and a three-part lower air intake grille emphasise the wide stance of the Gran Coupe while at the rear, bulging wheel arches and horizontal lines accentuate the wide track and again serve as pointers to the four-seater Coupe's performance potential.

The M Sport version has even more body styling features; most obviously, lowered and sculptured sills with 19-inch wheels. My test car, a 640d M Sport with standard sports suspension, was running on even larger 20-inch wheels which, while looking good and filling the wheelarches, were a real pain the backside — literally. They just aggravated the firm ride even when the softest suspension setting was chosen; they didn't absorb any impacts from potholes; and just driving over cat's-eyes was very noticeable.

Poor road surfaces also resulted in significant noise intrusion from these bigger wheels and run-flat tyres — not at all in keeping with a relaxed and refined long-legged grand tourer. The big fat tyres also tended to follow the now usual tram-lined motorway road surfaces, giving the steering a significantly strong straight-ahead tendency.

My advice? Save yourself Ł1,105 and stick with the standard size wheels. Even better advice is to stick with the 640d SE version which costs Ł63,900 instead of Ł68,565 for the 640d M Sport — you still get the Gran Coupe's stunning good looks, all the extra interior space, and most of the equipment you'll ever practically need.

Identifying BMW touches include the 'shark nose' with large forward-leaning double-kidney grille and broad air intakes, plus the dual circular Xenon or LED headlamps; the Xenon headlights use BMW's familiar double-corona units, while the optional Adaptive LED headlights pivot in line with the car's speed, steering angle and lateral body movement during cornering.

The Gran Coupe's interior is without a doubt the most spacious and practical 6 Series cabin ever. This has been made possible by stretching the wheelbase and overall length of the standard 6 Series Coupe (on which it is based) by 113mm to 5,007mm; the resulting 2,968mm wheelbase provides impressive legroom for two adult passengers in the rear pair of individually sculptured sports seats.

Although there is ample headroom once seated, you do need to watch your head getting in due to the low door frames.

For added versatility for some 'grand' touring, the rear seatbacks can be folded to swell the 460-litre boot to 1,265 litres. BMW says that even with four seats in use the luggage compartment will accommodate two golf bags. And there's an optional through-loading hatch that allows for two pairs of skis to be transported.

The business-end of the cabin is unmistakably BMW thanks to its driver-oriented layout. The automatic gear selector, electronic handbrake and iDrive controller are mounted in the centre console, which runs through to the rear of the cabin. All models have Dakota leather upholstery, BMW Professional Navigation with a 10.2-inch high-resolution display, front and rear Park Distance Control (a must for a car this long), Keyless Go, dual-zone climate control, electronic two-way steering adjustment and heated front seats.

While 80% of 6 Series Gran Coupe UK customers are expected to choose the 640d, some buyers who traditionally cover less mileage may prefer either of the two petrol-drinking models. Whichever, all are top-speed restricted to 155mph.

For the record, the 640d diesel-powered version has the same nought to 62mph figure (5.4 seconds) as the 640i petrol; and they're both only 0.8 seconds slower than the 650i direct injection, twin-turbo 4.4-litre V8 petrol unit (0-62mph in 4.6 seconds). Where the diesel unit beats its petrol-quaffing siblings is for fuel economy and lower taxation, hence its popularity whether the customer is a business user or a retail buyer.

The great thing about the 640d engine is its refinement and torquey response: you never really notice it's a diesel; there's hardly any noise intrusion inside; and it's quiet outside as well.

For drivers wanting a long distance tourer, this BMW is possibly one of the world's most sporting yet luxurious diesels. The all-aluminium 3.0-litre straight-six unit in the 640d officially delivers a combined fuel economy of 50.4mpg. In terms of potential range, its 70-litre fuel tank lets you travel almost 800 miles between refills.

Covering all types of motoring conditions, motorways, stop-start commuting and winding country roads, my 640d returned 40.2mpg. Not bad at all given its 313bhp and 464lb ft of torque between 1,500 and 2,500rpm.

Another big advantage for a car of this quality, value and image are the low CO2 emissions — just 148g/km. This brings the double benefits of a 23% BIK (for company car drivers) and Vehicle Excise Duty of just Ł135 a year for all.

The 640d excels in so many areas: performance, handling, quality, and roomy interior for four adults, to list just a few. Hard to bear is the very firm ride and the price. Although in luxury car terms the 6 Series Gran Coupe could be considered not that expensive, it is many thousands of pounds costlier to buy than the equivalent four-door coupe-style Audi A7 Sportback and Mercedes-Benz CLS.

But it is cheaper to run, so it's really down to buyer's choice. I'd go with the BMW 640d Gran Coupe just for its exquisite yet stunning sports styling, with the SE spec but without the big 20-inchers. — David Miles