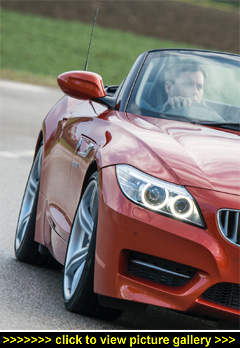 TEMPTED? The engine line-up remains all-petrol — the mid-life-refreshed Z4 range still offers the 184hp 20i, 245hp 28i, 306hp 35i and the 340hp 35is. Standard across the range is BMW's award-winning EfficientDynamics technology (improves fuel economy and provides braking energy regeneration). Z4 prices top out at just under È46K.

All Z4's also make use of a six-speed manual gearbox' with power put down through the rear wheels. Customers can also order an eight-speed automatic with gear-shift paddles or, for the 35is, a seven-speed double clutch auto also with paddle-shifters.

Mainstay base and M Sport derivatives continue to be available, now joined by a new special edition option called Pure Design Traction — depending on which engine and spec combo is chosen, it adds between È550 and È2,240 to the price. This styling pack has the option of Valencia Orange body colour with optional black roof; it also includes sports seats with Alcantara and leather upholstery with contrasting stitching, Anthracite headlining and a unique metal weave interior trim.

In the revamped Z4's first full year of UK sales, BMW says they expect to sell in the region of 1,700, most of them to retail customers. The new price-led 137mph 18i is expected to show a 20% take-up but, even in this specialist fashion-led muscle-sports car sector, this could be higher due to its attractive lower pricing.

The latest Z4 retains BMW's classically curvaceous but muscular roadster styling: a long bonnet with the two-seater cabin set aft but just ahead of the rear driving wheels. As before, it has a folding metal roof and — just in case — pop-up roll-over hoops.

The latest styling tweaks are minimal but noteworthy: LED corona rings for the signature BMW headlights; white 'eyebrow' lights; and chrome detailing and LED lights in the side vents in the upper part of the front wings. Overall the Z4's long, low, and wide muscular stance continues, leaving nobody in any doubt as to its thoroughbred roadster performance intent.

The 18i manages to return the same fuel economy of 41.5mpg in the official Combined Cycle, and its CO2 emissions are also the same as the 184hp model at 159g/km. Given the minimal performance differential, the saving of È2,100 for the 18i over the 20i will be welcomed.

On paper the 18i's fuel economy looks good. In practise on the winding and hilly routes used for the media launch in Tuscany, the consumption suffered — and in view of the wet and slippery road surfaces, not through any unrealistic driving. We achieved only 26.9mpg and I cannot see it improving much on our more traffic cluttered UK roads.

Despite its drop in power and torque, the engine supplies just about enough turbo-boosted performance in terms of speed and response with its 177lb ft of torque. It's enough to be respectable and safe when overtaking slower traffic although the reduction in power and torque over the 184hp 'donor' unit is definitely noticeable; and no worries about the rear-wheel-drive roadster becoming tail-happy during hard acceleration and on damp roads. But then, for some customers, the Z4's aggressive and sporty styling and fresh-air cruising ability will appeal more than outright tyre-shredding performance.

With its 50:50 weight distribution and rear-wheel-drive the Z4 remains well balanced with taut handling and precise responses, although the energy-saving electronic power steering does not give perfect feedback to the driver. On the plus is BMW's Drive Dynamic Control — it's standard on every Z4 and allows the driver to fine tune the roadster to their preferred characteristics: Normal, Sport or Sport+. The chosen mode affects the throttle and steering responses as well as the Stability Control. These features are more than 'toys' although for most drivers leaving the settings in Normal works best most of the time.

Our test car had the larger 18-inch alloy wheel option, fitted with the run-flat tyres that are standard on all versions — the ride was firm but it wasn't uncomfortable or tiring even though the two seats are positioned just in front of the rear axle. The cockpit is, of course, sporty in design and relatively cosy but that's all part of the Z4's sporting pedigree.

Fresh-air fiends can lower the metal roof in 20 seconds and, even though it rained, we tried top-up and top-down modes. With the roof folded away, side windows up, wind deflector in place and the heater set to hot, the cockpit remains a welcoming place.

With the roof automatically 'parking' in the boot, the 310-litre load space is significantly reduced (to 180 litres) so some forethought needs to be given not only to the size of luggage to be carried but also to its shape. A handy load-through facility is optional.

Okay, the 18i lacks the performance and driving fun of the more expensive and notably more powerful Z4s (and there's limited steering feedback) but it does serve up roadster-style street-cred. On the move it delivers good handling and balance, and easily copes with its lesser-powered engine. It's also solid and well made, and the relatively low purchase price lets new-to-the-sector owners join 'club' BMW. — David Miles