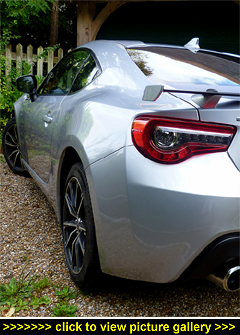 “On the affordable side of Ł30K,
Subaru’s BRZ is one of the most
entertaining driver’s cars you can
buy. And for those who do not
already know — it’s a lightweight,
front-engined, rear-drive 2+2
sports coupe...”

A FLURRY OF MEANINGFUL TWEAKS have been made to the BRZ, and there's legendary Japanese subtlety about them — look very carefully and you'll spy a new grille, new full-LED headlights, and new-look 10-spoke black alloy wheels with polished highlights. Making sure the BRZ still looks 'The Biz' is a meaty pro-track-style metal rear spoiler underscored by fist-sized chrome 'cannons' poking out either side of the rear diffuser panel.

In the cockpit there's a new smaller-diameter multifunction steering wheel, fresh trim and plenty of standout red overstitching on the upholstery for a more upscale air. Also welcome is the new 4.2-inch driver's trip display in the instrument panel that gives more real-time feedback; notably a lap timer, G-force meter, and active torque and power status graphics. Also new — a Track setting has been added to the drive mode selector. Out of sight are suspension and powertrain upgrades that improve both handling and miles-per-gallon.

Keen drivers will immediately gel with the cabin architecture: you sit with your legs well under the dash in the time-honoured 'low-slung' sports car position. Shapely, supportive and effectively-bolstered sports seats are upholstered in leather and Alcantara and hold you (and your front passenger) firmly in place.

The driving position is spot-on for road and track — you sit low but with a fine view down the bonnet, with clear sight of the crests of the wings where they stretch over the front wheels, making the BRZ very easy to place accurately on the blacktop. For road-work there's also unexpectedly good rearwards visibility thanks to the full-width rear screen and headrest-free rear seats.

A neat feature which effectively avoids the 'curse of the coupe' (that long awkward reach back over your shoulder every time you climb aboard most coupes) are the click-on/off loops on the 'wings' of the outer seat shoulders.

Once belted up you can appreciate the 'functionality first' architecture: dead ahead through the smooth and grippy leather-wrapped steering wheel sits a large rev-counter red-lined at 7,800rpm with a digital speed, engaged gear, and fuel readout in its lower quadrant; a smaller analogue speedometer is hived-off to the left with the new 4.2-inch multi-display to the right, keeping you apprised of mpg, range, lap speeds, and more. Taking in pertinent driving data in the quickest of glances is the aim. And you do.

The dials have glowing red needles while keeping you cool is helped by the four large high-level air vents (two topping the centre stack) that ensure you have all the cold (or hot) air you desire delivered where you want it the most. The autobox's selector lever is short and close, as too are the Start Engine button and trad pull-up handbrake. An ally rest in the spacious knee- and shin-friendly footwell for your left hoof helps on cruise control runs. Everything in the cockpit coalesces nicely and you don't feel you're just sitting in the car but that the BRZ is wrapped around you.

While purists would argue that the chassis is the most important part of the driving dynamics equation, let's deal first with what lies beneath the bonnet.

Occupying the BRZ's engine bay is a true-blue Subaru horizontally-opposed flat-four 'boxer' petrol engine that redlines at 7,800rpm and spits out 197bhp.

Wind it up and you'll hear that distinctive off-beat throb that only flat-four engines can muster — enough to shift you off the line and past 62mph in 8.2 seconds. It's always tractable and thrives on revs — actually, the naturally-aspirated 2.0-litre is a glutton for them, making changing down to keep the redline close the secret of 'boxer' happiness. Not a problem as it's mechanically smooth, even at the top end, and always feels eager to take a thrashing for the team.

Unless you're ramping it up, the large-bore exhausts are surprisingly subdued — but don't be taken in by the aural docility: just because it doesn't sound frantic doesn't mean you're not setting a pace — in reality you're probably doing 70mph even though it feels as though you're just loping along at a lazy forty-five.

Even Bugatti owners can't resist checking what they're getting to the gallon and my, how they'd love to see the same as you'll get from a BRZ. On paper it averages 39.8mpg — impressively, that's just about a perfect match with our recorded overall test figure of 39.2mpg! Even the worst London traffic could only knock it down to 35.7mpg.

So, how does she handle? The BRZ feels as agile and light-footed as she looks. With four-wheel drive now appearing in everything from city cars to road-biased Nürburgring-savvy off-roaders, it's invigorating to experience the controllable oversteer and involvingly fast turn-in that only a lightweight rear-drive chassis can deliver.

The number one reason you buy a 'proper' sports car (like the BRZ) is to experience the rush of real-world driving entertainment — the physical kind that you'll never find on a PlayStation in a million games. This newly-refreshed BRZ is palpably even more enjoyable; truth be known, the BRZ also rides amazingly well for a sports car, and trips long enough to fall into the 'grand tour' class can be undertaken without a second thought.

Exploiting the best of drive and dynamics is easy in the auto, which offers three driving settings: Auto, Manual (flick over slightly to the right, then tap forward/back for fluent up/down manual shifts), and Temporary Manual, the latter allowing 'quick fix' downshifts via the steering wheel's paddle-shifters.

Adding breadth are Sport, Snow and Track modes, all activated by individual switches immediately aft of the selector lever. In Manual mode, with the right gear for the moment locked-in, the BRZ feels ardently grippy; factor in faithfully tight body control and you have the prefect recipe for spearing through bends while cleaving tidily to your chosen line, all the while pushed through with the kind of ardour front-wheel drive doesn't know exists.

If you somehow manage to overcook it, unlike MasterChef, you won't be off the show — there are no palm-sweating moments in the BRZ. Sure there's oversteer but that's why you bought it in the first place so you can have fun playing it. Not only that, the BRZ doesn't have a malicious bone in its body so won't be laying in wait to kick out its tail at the most tricky moment but will give you a well-mannered heads-up well ahead of any catchability issues.

Of course, on today's roads nobody drives at eight-tenths. Unless you're trackdaying you'll be maybe running at no more than five- or six-tenths. At which tempo the BRZ feels playfully agile on its Michelins in a polished Strictly Come Dancing manner.

Saw the wheel and, courtesy of the quick steering, it'll take sudden directional changes in its stride and go where it's pointed. We should mention the brakes, too: hefty vented discs front and rear generate strong stopping power; and right from the top of the pedal travel it's firm and effective.

Behind you are fitted a pair of great-looking, deeply-scooped seats either side of a central ridge. They're easily accessed and actually quite comfy (albeit tight) for grown-ups so long as your front seat passenger is willing to compromise on legroom. However, drive the BRZ as Subaru intended and you certainly won't want to handicap your pleasure with non-essential body weight.

Now you wouldn't expect a dyed-in-the-wool sports coupe to moonlight as a load-lugger, but even so pop the high-opening bootlid and there's a respectable amount of boot space for some serious touring trips — a wide and practical 243 litres.

And it gets better: fold down the single-piece rear backrest and you'll liberate a long 1,270-litre loadbay that's seamless all the way back to the minimal rear boot lip. Very useful when it's Two for T (Touring). No point in wasting space on a spare wheel — a puncture repair kit is standard-fit and leaves some extra room under the boot floor for storing oddments.

A satisfyingly slingable and delightfully unpretentious driver's car; fast or slow, the BRZ makes an uplifting everyday companion. And there's not much around at this money that will put as big a smile on your face. ~ MotorBar