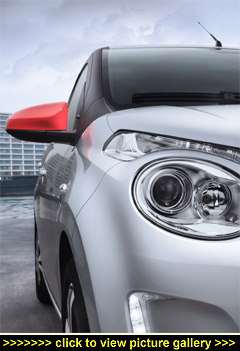 “The new Citroen C1 City Car is the
last of a trio of new same-size three-
and five-door City Cars just launched
in the UK. Interestingly, they’re all
related: built at a Toyota-PSA Peugeot
Citroen joint-venture factory in the
Czech Republic...”

TOYOTA'S AYGO ARRIVED with the marketing strapline 'Go fun yourself!', promoting the fun driving side of such a car; the Peugeot 108 came a 'This time its personal' jingle to promote the many and varied personalisation options; and now the Citroen C1 is here highlighting its short and to the point 'Naturally urban' theme.

Like the Peugeot 108, the Citroen C1 is available in three- and five-door hatchback guises along with an opening canvas sunroof bodystyle which Citroen call Airscape and Peugeot call Top. Toyota, on the other hand, only offer their Aygo as a conventional hatchback without a soft-top option.

There are differences, too, between the Toyota and PSA brands in the engine offerings. The PSA versions offer customers the choice of the frugal but gruff-and-tardy 67bhp 1.0-litre three-cylinder Toyota-sourced petrol engine or the new and zippy performing PSA-sourced PureTech 1.2 three-pot petrol unit with 80bhp (both, incidentally, are non-turbo units).

All three brands are big on personalisation and option packages where customers — young and old — can tailor their cars to meet their fashionable, or functional, needs. Each can be identified by the latest incarnation of their brand's family face — with its sporty X-grille design the Aygo seems the most eye-catching; by comparison, the 108 and C1 look rather bland. At the tail, all feature different treatments although all three are built around a deep glass tailgate.

The new C1 is offered in three trim levels: Touch, Feel and Flair(the soft-top Airflow can be had in Feel and Flair spec). Range prices start from Ł8,245 and top out at Ł11,935 — much the same as the Peugeot 108, and both a little cheaper than the Toyota Aygo.

With over 75% of retail car buyers now using finance or PCP personal contract purchase schemes, the cheapest C1 can be obtained for an Ł85-per-month payment over three years following a Ł2,264 deposit with Citroen making a contribution of Ł250.

Which means the most affordable C1 actually costs Ł7,995, as does the Aygo which has a Ł600 launch offer on its cheapest version. Toyota and Peugeot also offer attractive PCP rates starting from Ł89 a month.

Like its Toyota and Peugeot siblings, the C1 majors on smart, cheerful and compact design, improved driveability, more ride comfort, low running costs and lots of personalisation options along with a choice of eight exterior colours. It's also available with a 7-inch Touch Drive interface that groups together all of the car's media and information functions (radio, telephone, on-board computer, etc).

The C1 is also Citroen's first model to feature Mirror Screen technology, which offers an advanced connectivity solution. This particular function allows the motorist to copy their smartphone content onto the 7-inch Touch Drive interface for easy display and control.

Users then install an app enabling them to connect to and share data via the car's USB port, after which they can access their smartphone's various functions using the touchscreen. Mirror Screen draws on two technologies: AppinCar as developed by Pioneer for iPhone users and MirrorLink technology developed by Car Connectivity Consortium for other smartphone brands such as Samsung.

Once installed the motorist can take full advantage of a range of smartphone apps from the 7-inch Touch Drive interface: navigation, telephone, address book, music, web radio, and any other useful driving-compatible functions.

A range of on-board technology is also available to make driving easier. These include a reversing camera and keyless entry and start. Hill-start assist is standard across the range and, handily, holds the car stationary for two seconds for an easy re-start on slopes with a gradient of over 3%.

A speed limiter and steering-mounted controls are also available. There's also a range of comfort features such as automatic AirCon — a first on the C1 range — and, on 3-door versions, memory settings for the front seats.

Just like the new Toyota Aygo and Peugeot 108, ride comfort, handling and steering control are all improved over the previous generation C1. The new electronic power steering is light and precise, making the C1 a neat handling and nimble car to drive in urban areas, and relatively sprightly (depending on the choice of engine) on rural roads.

Rear seat legroom is still minimal although there is now more room in the boot and load area. The 196-litre boot is easy to access, with the parcel shelf rising with the tailgate when it's opened. Folding the rear seatbacks down increases load capacity to a practical 780 litres.

The 67bhp, 1.0-litre, three-cylinder VTi petrol engine comes with Stop & Start technology and a five-speed manual 'box and can return up to 74.3mpg in the Combined Cycle — well, that's the official 'headline' figure for the three-door model. On test our fuel consumption figure for this engine in the five-door C1 was 54.1mpg — well short of the official 68.9mpg figure but nevertheless still impressive.

And with just 88g/km of CO2 there's no road tax to pay. CO2 figures do vary depending on the spec/model chosen, but all fall under 100g/km. Top speed is 99mph with zero to 62mph taking a lengthy 14.3 seconds — while that's fine for urban driving, it is hard work for open road travel.

Like the Peugeot 108, the new Citroen C1 can be ordered with PSA's new PureTech 80bhp, 1.2, three-cylinder petrol engine. This much livelier and responsive unit with a five-speed manual 'box officially returns 65.7mpg in the Combined Cycle with 99g/km of CO2 (so road tax is still zero cost).

This is combined with rewarding performance with much better torque of 85lb ft at 2,750rpm that delivers a 0-62mph acceleration time of 11 seconds and a top speed of 106mph.

On test around the busy Warwickshire roads, our PureTech-powered C1 returned 39.6mpg for the five-door version — still not very close to the official figure but we enjoyed the much better performance over the noisy, sluggish 1.0-litre engine.

Touch and Feel hatchback versions only come with the lethargic 67bhp engine. However, if you go down the Airscape five-door route with the best-selling Feel trim, the extra cost of the 1.2-litre engine over the 1.0-litre offering is a mere Ł350. This is a bit of a bargain given the vastly better performance the larger engine offers, and definitely makes the C1 more usable for longer journeys.

Against: minimal rear passenger legroom, tardy performance from the noisy 1.0-litre engine although it is good on fuel economy.

Overall the all-new Citroen C1 offers a wide range of choices in terms of spec, personalisation options, and body styles. But customers need to choose carefully and compare the C1 against the stiff competition in the City Car sector, which doesn't just include the Aygo and 108. Also to consider is the highly-rated Kia Picanto, the Hyundai i10, VW's Up, the Skoda Citigo, SEAT Mii and the budget-priced Suzuki Alto. With all these to choose from it really is a buyer's market. — David Miles