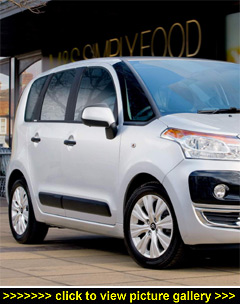 “The MPV sector showed one of the
strongest rises in UK sales for the
first half of this year. Reflecting that,
Citroen’s six month sales were up
by 21%. Not so surprising, given that
Citroen are big for the variety of
MPVs they sell, including the latest
C3 Picasso. But is it a practical work
of art — or not?”

IN ADDITION TO THE AWARD-WINNING C3 PICASSO, Citroen also offer other people-carriers: the C4 Picasso, Grand C4 Picasso, the C8, the Berlingo Multispace and the Nemo Multispace and, until recently, they had the long-serving and very attractively priced Xsara Picasso. And I could also include the seven-seat C-Crosser SUV 4x4. Easy to see why the name Citroen has become synonymous with 'family-friendly'.

Having a blank week in my diary — at least as far as attending new model press launches — and with the sun shining and a C3 Picasso 110 Exclusive sitting on my driveway, what better time to take a holiday in Cornwall?

Usually on press launches we only get a relatively short time to experience what new vehicles offer, so an extended real-life experience on how something really performs is always very valuable. So, along with my grown-up daughter and my wife, we load up the C3 and head West.

The C3 Picasso has received numerous awards and accolades since its launch fifteen months ago but does it really do what it says on the box? Is it really as practical as a Tupperware box?

After I had finally squeezed our essential baggage into the load space and with my wife, daughter and myself aboard, we eventually set off. I should mention that when loading the luggage I did have to fold down one of the rear seats just to get everything in. Being a supermini-sized MPV (at just over four metres in length), in real life the compact C3 Picasso is perhaps too small for family holiday use.

That's not to say it's not fine for older couples and the family dog (the main users I discovered during the South West trip), likely okay for young mums taking children to school and even young active couples who just need two seats but with loads of carrying space: with all four/five seats in use the boot space is a compact 500 litres; with them folded down this triples to 1,506 litres. As such, the C3 Picasso offers a practically-designed, boxy luggage area with a low rear sill to make loading easier and, I suspect, not too high for the dog to jump in and out!

Once underway two further issues came to light. The armrest (not standard on all models) on the driver's seat gets in the way of buckling up the seat belt and operating the handbrake. Yes it folds up out of the way, but it is nonetheless annoying. The second issue was the lack of support the seats offer: the suspension does a first class job of ironing out the bumps and potholes but the seats, although they initially felt comfortable, after an hour or so we found offered very little support and while the cry of "are we there yet?" wasn't actually voiced, my two female passengers did request a comfort break to stretch their legs and ease their backs.

In truth the break did me no harm either as the foot-space for the driver is limited around the clutch pedal and I couldn't get quite enough legroom to drive the vehicle comfortably. None of these issues showed up during my press launch road test, so you now see what I mean about having the benefit of a real-life driving experience.

Trim and equipment levels for mainstream models range from VT to VTR+ to Exclusive but not all engines are available with all options. There is an additional Airdream+ with a 1.6 HDi 90 version mainly for business and fleet customers.

Looking at the specification choices, VTR+ looks the best, most cost-effective choice and I rather suspect most families who generally cover lower mileages will go for the 1.6-litre, 118bhp petrol engine which officially returns 40.9mpg in the Combined Cycle. With CO2 emissions of 159g/km the annual road tax is Ł155. This model, with the VTR+ specification, comes at the attractive price of Ł14,295.

My test version, the 109bhp turbodiesel unit (known as '110'), will officially return 57.6mpg and I recorded a very creditable 48.6mpg in real-life. This included 450 miles of motorway and dual carriageway driving to and from Cornwall plus another 400 miles of typical Cornish hilly roads and lanes plus the usual stop-start of town shopping trips. With low CO2 emissions of 130g/km the First Year road tax rate is Ł0 and then Ł90 a year onwards. If this model is going to double up as a company car, then the Benefit-in-Kind rate is 18%. For the record, the insurance rates are low too, ranging from group 10 to group 14 for the range-topping model I tested.

So what equipment do you get for our money? Well, being Citroen — well known for their attractive packages and real-life low prices — quite a lot. All versions have as standard ABS with brake-assist, power steering, remote central locking, panoramic windscreen, height- and reach-adjustable steering column, scented air freshener, multi-function computer, a good sound system with six speakers, electrically-adjustable door mirrors and front electric windows.

Being a people carrier, I would have expected that by now all models would have the soon-to-be-compulsory ESP electronic Stability Programme — they do not. It is a Ł360 option and only available to special order on Exclusive versions. And that is not good.

Exterior styling will divide people. Some think it looks very modern and stylish; others think its extreme boxy shape is a step too far. While I am with the latter group, I have to concede that being an elongated box makes the best use of what space this four-metre-long MPV offers. However, being tall it suffers from bodyroll during cornering and that gets worse if it is fully loaded. That noted, the suspension is good, the handling agile and the steering responsive. Visibility to the front is first class.

The common-rail, direct-injection turbodiesel engine we know well from other models from Citroen. It is strong — plenty of 'grunt' with 177lb ft of torque from 1,750rpm — and it is fuel efficient, as my test figures show. Thankfully, the engine is mated to a five-speed manual gearbox with sensible gear ratios so it is responsive to drive at high or low speeds with the minimum of effort.

For some the C3 Picasso will be too small for family transport and luggage carrying. Another negative is that there's no ESP as standard. Additional criticisms include unsupportive seats, stingy left foot space for the driver and the like-or-loathe styling. On the other hand, plus points include the compact size, top models are well equipped, comfortable suspension, flexible seat/load carrying facilities, good forward visibility and a fuel- and cost-efficient diesel engine.

The C3 Picasso is good in many respects but from my real-life experience with the family I am not convinced it really measures up for space. It is clever, distinctive and it will fit the bill for many, but size really does matter when it comes to family transport. The slightly larger C4 Picasso is more acceptable — it costs a bit more (with prices from Ł17,205), but it offers much more in the way of useable interior space and for me it also looks much better. If the C3 Picasso still appeals, I would strongly recommend you go for a 'fitting' first just to see if it measures up to your real-life motoring requirements. — David Miles