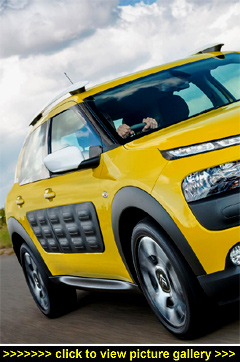 “The new Citroen C4 Cactus could
be just what you’re looking for —
if, that is, you like your affordable
family hatchbacks simple but
distinctive rather than over-
complicated and samey-looking...”

BUT ARE THERE ENOUGH BRAVE customers in the UK to make the Cactus popular? If not, then like some other quirkily designed cars it could flower briefly and then whither away.

Loosely based on the Citroen C4 five-door hatch, its quirky redesign has turned the Cactus into a Crossover which the new head of Citroen, Brit Linda Jackson, says is a hint to the way forward for the brand.

Other Cactus 'Urban Ride' style treatments of higher ground clearance, wider tracks, SUV-inspired moulded wheelarches and bumpers and moulded side protection panels could also be adopted for the small C1 and the C3 supermini model ranges. Competitors include the Nissan Juke, Kia Soul and the Renault Captur.

PSA Peugeot-Citroen-DS are trying to separate the image of their three brands with Peugeot said to be moving upmarket, Citroen staying mainstream (but with more interesting designs such as the Cactus); the newly-independent DS brand (now hived-off from Citroen) is set to return to the premium days when DS models were luxurious and were ardently admired for their uniquely distinctive looks.

Launched just a few months ago, the Cactus has already received more customer interest through dealerships and on-line than any other Citroen model in recent years. Its attractive pricing — from Ł12,990 — plus its size, its style and, not least of all its name, have triggered people's yearnings to break away from normality when it comes to the cars they actually buy.

Whether there is enough real demand remains to be seen — hence my earlier hesitation on whether it will be a long-term success or a short-term flash-in-the-pan. Citroen UK don't know either as they are not giving any sales forecasts but for now the Cactus looks healthy; it has wings — but will it fly?

The design of the Cactus blends modern-day SUV/Crossover styling (but with only front-wheel drive) with yesteryear oddball functionality features such as the outside plastic impact absorbing panels once seen on the Renault 5. There is also an element of Citroen's own 2CV simplicity in the Cactus as well; a soft and comfortable ride, straps to pull the front doors closed, and pop-out hinged rear windows.

Other plus points include the Airbump door panels that should limit the scratches and dents received in skimpy supermarket parking spaces; the plastic shields on the side sills and bumpers should also provide protection against careless use, while the added ride height means off-road travel — or more likely kerbs — can be taken in its stride.

Inside the spec is not really basic at all; but note that despite its somewhat 'utilitarian' looks, it's not a 'wash-out' vehicle such as the 2CV, so sticky fingers and wet dogs will leave their marks.

There is a large tailgate but the rear sill is high and the boot floor low so heavy items have to be lifted up and then lowered down into the boot. Why the boot entry is not low level for optimum practicality is a bit of a mystery — even a height-adjustable false boot floor would make loading much easier.

There are 358 litres of boot space which jumps to 1,170 litres with the rear bench seat folded down. The Cactus will also tow a braked 720kg.

There are three spec levels: Touch, Feel and Flair. Engine choices are from a new 1.2-litre PureTech (in 70, 82 and 110hp tune) petrol engine, a 1.6 BlueHDi 100hp turbodiesel or a 1.6 e-HDi 92hp turbodiesel with automatic 'box. More engines will be added to the line-up, including PSA's petrol/compressed air Airflow unit.

My test car was the PureTech 82 manual with Feel specification — the likely best-seller which costs Ł14,590. This new PSA family 1.2-litre, three-cylinder turbocharged petrol engine is impressive. It is free-revving, not too lumpy or noisy (as with some 'triples') and it is responsive and kind for running costs.

The official Combined Cycle 61.4mpg looks good and in real-life my test driving, covering most types of roads, returned 48.2mpg. My colleague, driving the Cactus at the UK press launch and using the same version of this engine but with an automatic gearbox, managed 80mpg! A good reason for any retail customer not to spend the additional Ł2,000 needed to buy the Feel spec diesel 1.6-litre 100hp engine over the Feel spec 1.2-litre 82hp turbo petrol unit.

However, the diesel unit does have one small advantage: its very low CO2 emissions of 87g/km means no road tax at all whereas the 82hp petrol unit's 107g/km incurs Ł20 a year road tax after the first free year. Company car drivers will pay 14% Benefit-in-Kind tax for both units because of the current extra 3% loading on diesel-fuelled vehicles over petrol ones. The diesel's fuel economy will be better, but not by that much to make it financially worthwhile unless big annual mileages are being covered.

The 1.2-litre 82hp petrol-powered Cactus runs to a maximum of 106mph with zero to 62mph acceleration taking 12.9 seconds. There is enough torque (87lb ft) available from 2,750rpm to make the lightweight Cactus a spirited responder when the accelerator is pressed; and it is, happily, not a noisy unit. It will cruise easily at legal motorway cruising speeds and climbing hills doesn't slow progress to any great extent thanks to the well chosen gear ratios in the slick five-speed manual gearbox.

The Cactus rides flat and level and, despite its armchair comfort, bodyroll is minimal; and it's not too 'soft' so passengers should not feel queasy either.

There are also electric front windows, lots of airbags, a folding rear bench seat, 17-inch alloy wheels and LED running lights. Feel spec additions include AirCon and roof bars. Naturally there is a wide range of options and personalisation items and packs.

Most worthy is the navigation and hi-fi pack costing Ł495, a must-have space saver spare wheel at Ł75, and the user-friendly city camera parking pack at Ł395.

In fact, the Citroen C4 Cactus is all about user-friendly, comfortable, low-cost motoring and all wrapped up in an eye-catching package. It should appeal to those motorists who want to be different — it could even become a cult model, but that is a big 'could'.

Reasons to buy include the unique quirky design, it's simple to live with, cheap to run, and comfortable. Against? No rear electric windows, high boot sill and low boot floor that makes for difficult loading, fiddly AirCon/infotainment systems controlled through the touchscreen, and like or dislike 'Marmite' styling.

I might just hold on to my money to see how it is received by other UK buyers. Quirky niche models have a habit of not staying the course financially, so that what seemed like a good trendy idea at the time might not be a sound longer-term purchase. Does the Chrysler PT Cruiser ring any bells? — David Miles