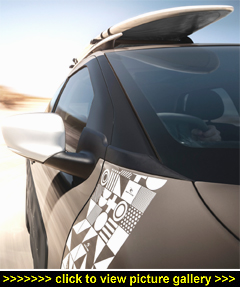 “Citroen’s oddball Citroen C4 Cactus
crossover range first launched in
the UK in 2014 and since then it’s sold
like the proverbial hot cakes — more
than 11,000 UK buyers last year and
over 10,000 customers in the first ten
months of 2016...”

A PROVEN DESIGN-LED PRODUCT, the C4 Cactus range is chunky in style with a blunt front, high bonnet, air-blister side protection mouldings and plastic wheelarch and side sill guards plus a line-up of the award winning PureTech and BlueHDi PSA Group's latest engines.

Adding a frisson to the individualistic C4 Cactus range is the latest addition to the line-up, the Cactus Rip Curl. Described by Citroen as a unique and fun crossover, it also comes in several other trims and specification levels — underscoring that, a major selling-point is the numerous personalisation options.

Depending on the spec level, there is a choice of 1.2-litre PureTech non-turbo and turbocharged 75, 82 and 110hp three-cylinder petrol engines as well as 1.6-litre BlueHDi 100hp four-cylinder turbodiesel units. Prices start from a very attractive Ł12,990 and top-out at a hefty Ł20,495.

My test C4 Cactus was the Rip Curl version with the 108bhp (110hp) PureTech petrol engine that sells for Ł18,840; a 110hp turbodiesel Rip Curl is also available.

Both have a manual transmission and both versions are the only Cactus models to have PSA Group's Grip Control-enhanced on-demand traction system. This provides five selectable driving modes: Standard, Sand, Off Road, Snow and ESP Off (which deactivates the stability control programme).

The Rip Curl variant was born out of collaboration between Citroen and the legendary brand from the world of surfing, Rip Curl. The theory is the Rip Curl models offer even more radical design and adventurous use.

The Rip Curl follows the standard C4 Cactus design of a crossover combining the design of a five-door family hatch with the elevated stance of an SUV. This soft-off-roader status is enhanced by plastic protection mouldings around the wheelarches, side sills, and the Airbump blister pack panels fitted to the side doors.

Inside, the colour orange is a main styling detail change from other Cactus versions. Orange denotes 'energy' — something surfers no doubt need. The orange adorns the seatbelts, floor mat stitching, and loudspeaker surround; grey upholstery is standard although there is the option of part-leather at Ł695.

Centrally positioned in the high level fascia panel is a seven-inch touchscreen which operates the radio, navigation, heating and ventilation system as well as the computer readouts and vehicle settings.

However, it's another example from the PSA Group brands (and others) of how annoying it can be to have to delve into the touchscreen programmes just to alter the in-car temperature or fan speed or adjust the radio channel. It isn't user-friendly and to my mind it isn't safe for the driver to be taking their eyes off the road to make these adjustments. Other notable Cactus design 'quirks' include the retro-style strap door pulls and the digital speedometer positioned in an elongated box on top of the fascia panel in front of the driver.

Design quibbles aside, the Cactus is roomy with big comfortable seats and a useful-sized 358-litre boot; folding away the rear seats creates a 1,170-litre loadbay. The only issue is the low boot floor and a high rear sill, which means heavy items need to be lifted over and down into the boot.

Coupled with a soft-ish suspension set-up, the big seats provide a lounge-style travelling experience. Yes, the road holding is on the loose side with a bit of sway and body roll but it harks back to Citroen's roots of comfy travel. Unfortunately the suspension, although soft, doesn't cushion-out the impacts and bumps generated by hitting potholes or on poor broken road surfaces. The coarse-pattern tyre treads (used to support the Grip Control function) also create a significant amount of road noise which penetrates into the cabin.

The joy of the Cactus Rip Curl model I tried — apart from the advantages of the Grip Control feature — was the three-pot, 1.2-litre PureTech turbocharged petrol engine. This family of engines has won numerous awards for their fuel efficiency and in particular the turbo versions for their performance.

The compact powerplant has that audible keynote three-cylinder 'thrum' — as a soundtrack it's actually quite pleasing, and adds 'character' to the driving experience. Mated to a five speed manual gearbox acceleration is quite 'punchy' from low revs. The power output is 108bhp but it is the muscular 151lb ft of torque delivered from 1,500rpm that serves up decent engine response from low speeds.

It will at times induce torque-steer (which needs to be watched), most noticeably accelerating hard out of low-speed bends. Top speed is 117mph and it cruises very happily and with ease at 70mph; the zero to 62mph acceleration time is 9.3 seconds.

Officially the Combined Cycle fuel economy is 65.7mpg and during my week-long driving spell the average figure was 52.3mpg. With CO2 emissions of 100g/km, there's nowt to pay for road tax — all-in-all it's just brilliant for a small capacity petrol engine in a family sized car.

You might dismiss the Rip Curl graphics as gimmicky but not the performance of the engine or the avant-garde styling. It's not a car for everyone, but if you don't want motoring in an also-ran modern-day family hatchback get behind the wheel of a C4 Cactus Rip Curl — even if you're not a surfer, it'll make you smile. ~ David Miles