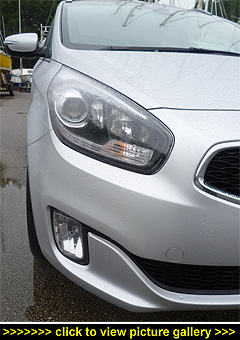 “As they used to say in silent-era
Hollywood, let’s cut to the chase —
the latest Carens from Kia is a car
for families. It’s smaller outside
than before but bigger in, roomy
enough to accommodate seven,
and won’t wilt under the urban
warfare that is modern family life...”

IT ALSO LOOKS FAR BETTER than an MPV has any right to — blame Kia's talented Chief Designer, Peter Schreyer, for that! Seen in the metal for the first time it definitely invites a second look: it's not just that by now well-known 'tiger's-nose' grille, but the whole enchilada; from the rakish front-end framed by shapely headlight units to the sculpted flanks and the pert rear haunches.

About that 'smaller but bigger' comment — it's true, this latest generation 7-seater Carens is indeed smaller on the outside: it's 20mm shorter, 15mm narrower and 45mm lower than the model it replaces, which puts it somewhere between its five- and seven-seat rivals. However, thanks to a useful 50mm longer wheelbase and lower seat positions, the Carens is roomier inside and more than matches the competition for space.

Plus you get seven seats for the price of five — while you don't have to use them, it's nevertheless nice to know they're there should you have the need.

The Carens offers a choice of three powerplants: a 1.6 petrol (133bhp+121lb ft) and a pair of 1.7 turbodiesels (114bhp+191lb ft or 134bhp+243lb ft). All are mated to a six-speed manual 'box. An automatic transmission option is available but only with the more powerful diesel unit.

If you need to regularly drive with at least two rows filled, be it for the daily school run or even less frequently holidaying en famille, then what you need is plenty of torque under your bonnet.

It's not rocket science that the 134bhp diesel is the one to go for as it gives you plenty — 243lb ft of it. Thankfully, being a diesel, that doesn't come at the expense of economy. Aided by a standard-fit (on all manual transmission models) stop-start system, the Carens is best judged by that old saying — frugal is as frugal does.

The paper figures are 47.9mpg (urban); 61.4 (extra-urban); and 56.4mpg combined. A week behind the wheel of the 134bhp CRDi saw an average of 47.4mpg recorded — credible for a 7-seat MPV; and all the more because we certainly weren't hanging about.

More good news about running costs: all-inclusive fixed price servicing packages for three or five years are available, so family motoring budgets can be accurately planned. And, of course, you also get Kia's honest and up-front and fully transferable seven-year, 100,000-mile warranty.

Settle behind the agreeably meaty-ish leather-wrapped wheel — multifunction and covering just about everything you're likely to need while driving — and right away you'll appreciate the crystal clear instrumentation and the clean action of the switchgear. Along with the interesting mix of smart trim materials, the welcoming cabin ambience, and the quality fit and finish.

The grippy steering wheel has a heated rim (actually a very worthwhile feature; brilliant on chilly mornings as well as on long journeys), seats, and the 3-stage heated front chairs are well-shaped and provide decent support and comfort — the driver can effortlessly fine-tune his or her seat for the ideal driving position thanks to ten-way electric adjustment (including powered lumbar and cushion extension). Good, too, to have a footwell big enough so that you can drive in boots if you need to.

The front passenger gets manual seat controls but they sit just as comfortably. Height-adjustable seatbelts, plenty of wheel adjustment for both reach and rake, and excellent visibility out in all directions from the driver's seat can also all be taken for granted.

You would expect plenty of useful cubbyholes in a family car; and you won't be disappointed with the Carens's class-leading tally. Practical in-car storage there is a-plenty, including a large chillable glovebox, a deep bin between the front seats topped by an armrest that doesn't cramp the trad handbrake (still preferred to electric ones by many drivers), numerous cupholders, door bins that will hold bottles or cans and, in the second row, two underfloor storage compartments.

Other nice touches include sturdy pop-up picnic tables on the front seatbacks for second row passengers, and a full-length glass sunroof that benefits all seven seats. One-shot op, naturally, with one-shot powered sunblinds.

While many carmakers now offer fixed panoramic roofs, the Carens's is the real McCoy — a big, power-opening sunroof. There's something special about pootling along with nothing but air between you and a blue sky or, even better, a star-studded overhead night-time tableau.

The second row is fitted with three individual seats, and they all slide (about nine inches) and recline independently of each other; there's plenty of room for heads, legs and feet, and comfy outer armrests, as well as drinks-holders in the rear doors themselves. Another plus: the centre seat can be folded to use as a table with a trio of built-in cupholders. The deep side windows also have built-in roller mesh blinds — much appreciated, particularly if you need to put youngsters in the middle row. And when not being used, all three headrests park low on the backrests to maximise the driver's rearward visibility.

Seats six and seven are proper seats (not glorified camping stools like some) and fold away into the boot floor when not required. Raising them calls for nothing more arduous that a light tug on their pull ties. Access to them is straightforward thanks to the 'walk-in' tilt 'n' slide mechanism on the outer second row seats. For adults, this third row pair are best for occasional use and for shorter trips; for younger family members they're just the job — kids everywhere really seem to prize sitting back there.

And on those occasions when a spot of 'cargo carting' is called for, the Carens won't let you down — six of its seven seats can quickly be folded flat. With seats one-through-five taken and seats 6 and 7 stowed under the floor, the boot offers a very accommodating 492 litres — and that's just loaded to below the window line. Fold down row two as well and 1,650 litres are available to you.

You can also fold down the front passenger seatback for transporting extra-long items. Another thoughtful touch: an underfloor compartment that's home to the removable luggage blind when not required and which also provides some additional storage as well as housing the removable towbar. Kia have even fitted a self-charging portable LED torch which doubles as a boot light.

At the risk of stating the obvious, the Carens is a fully-fledged MPV and not a sports car. But that's not saying that it can't be driven with some verve. For a start, the turbodiesel is responsive and eager to let you make good use of its power and torque; and the slick gearchange action is a willing collaborator in getting the best out of the 1.7 litres.

It helps, too, that it's easy to place accurately on the road, and the grip reassuring and the ride well damped — a smidgen firmer than your average people carrier but the upside is that your passengers will never be subjected to any unpleasant wallowing. And there's no ride penalty from the good-looking, multi-spoke 17-inch alloy wheels; no harshness, bangs, or crashes from the suspension on the UK's pockmarked and potholed roads.

Body lean is well-managed, and Kia's electromechanical three-mode Flex Steer system offers the driver the option of increasing or decreasing the power assistance to the helm: so you can have Comfort (light) for tricky city parking, Normal, or Sport for improved high-speed stability. If you enjoy your driving you'll most likely, like us, stick it in Sport and leave it there for the duration. The Flex Steer switch is on the steering wheel, so you don't have to move your finger far to change modes.

When you look at what you get as standard, the letters K-I-A could easily stand for 'kit in abundance'. Even on the entry-model (badged '1') Carens you get AirCon with rear air ventilation, multifunction wheel, front and rear electric windows, six-speaker radio/CD with MP3 compatability and Bluetooth with voice recognition and music streaming, LED daytime running lights, projection headlights with cornering lamps and 'welcome' and 'follow-me-home' functionality, electrically-adjustable heated door mirrors, cruise control with speed limiter, a rear conversation mirror, tinted glass, Hill Start Assist, Electronic Stability Control, etc.

Drivers who want the fully monty should go for the top level '3' spec — it provides everything you're ever likely to want: heated front seats and a heated steering wheel, leather upholstery, 10-way electric driver's seat, panoramic glass sunroof, reversing camera, second-row sun blinds, and 17-inch alloys. And the butterfly action wipers (a boon in bad weather as they clear to the edges of the windscreen on both sides) get an upgrade to aero blades and a de-icing system.

Ticking the range-topping '3 Sat Nav' box adds navigation with 7-inch touchscreen, 3D views, traffic messaging (route adjustment for heavy traffic conditions), and foolproof full UK postcode destination input plus an upgraded 8-channel amplifier and a sub-woofer. With comprehensive levels of specification like these, it's no surprise to find that Kia does not offer an options list.