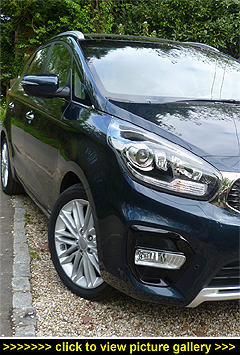 “M-P-V. For some drivers these
three letters spell an end to enjoyable
driving as family duties take priority.
But it doesn’t have to be that way —
Kia’s new 2017-model-year Carens
proves that...”

IF YOU WERE EXPECTING frumpy along with family-friendly, do not fear — the Carens is a breath of fresh air. Sure it's got the obligatory seven seat-versatility and spacious cabin, but it's all wrapped up in an attractive package penned by Kia's celebrated design guru, Peter Schreyer.

And while the latest Carens has generous room for multiple heads, it also turns them: it's fronted by a sporty face wearing the instantly-recognisable Kia 'tiger-nose' grille flanked by large sleek headlights cut deeply back into the front wings, all underscored by a silver 'skid' plate.

An expansive, steeply-raked windscreen is framed by slim A-pillars while along the sides clean flanks contribute to an athletic and aerodynamic profile. Once seen it's distinctive enough to stay in your mind so, post-shopping, you won't be wandering around the car park desperately seeking Susan sorry, Carens!

Six-speed manual boxes are the default although the 139bhp diesel can, should you prefer, be had with a seven-speed dual-clutch automatic. Also keeping the business of choosing straightforward is the fact that all Carens are seven-seaters.

The 139bhp 1.7 turbodiesel packs more than enough torque to get the job don,e even with a full load aboard, and its 250lb ft makes it the first choice for those regularly using all or most of the seats — for the school run, for instance.

Equally it's a fine choice for long trips, where it shines as a laid-back mile-muncher. For either of those jobs — and a host of others in between — you'll be glad of the manual gearbox's slick change action and the six well-stacked ratios for fluent progress in day-to-day running; better still, the pleasant and pokey engine is content running at low revs in higher gears, which makes for a quiet and refined interior on the move.

And with a stop-start system doing its bit, economy is good — driven in MotorBar's usual demanding manner, the 139bhp 1.7-litre Carens averaged 42.1 over the course of a punitive week's testing. However, with an official combined cycle figure of 62.8mpg there's plenty of scope for less pushy everyday owners to generate more miles from their gallons.

But first you need to claim a seat Swing open any door and you'll find a smartly-trimmed cabin beckoning you in — pale leather upholstery, carbon-fibre-look trim and fine fit-and-finish together create a welcoming upmarket décor boosted by a panoramic sunroof with a one-shot powered front section that retracts a long way back.

The seats are supportive with holding but not intrusive bolstering and breathable perforated centre panels, and any driver will immediately feel 'one-up' thanks to ten-way power-adjustment including lumbar and an extending seat base front cushion. Not that the front passenger is hard done by: both seats offer a fist+ of headroom and decent support for the upper back and shoulders, with plenty of elbow room between them, along with three-stage heating and height-adjustable seatbelts. Once set, the driver's seat provides a first-class driving position with excellent 360-degree visibility helped by large glasshouse windows and effective door mirrors.

The smooth, satin black leather rim of the three-spoke wheel is nice and meaty to grip (and heated, too) and it's comprehensively multifunctional with controls for cruise, speed limiter, phone, voice, FlexSteer, and the driver's display between the clear main dials. There's a digital speed readout in the trip display, and mini secondary gauges within the rev-counter and speedo.

Most drivers will be glad of the traditional pull-up handbrake; an armrest between the front seats that slides fore and aft at a height that will suit both the driver and passenger; and a roomy footwell large enough for boot-wearing-drivers, with a comfy left-foot rest for cruising.

And with a full complement of passengers on board, the standard-fit Parallel Park Assist System really does take the stress out of parking — for DIY-parkers there are front and rear audible sensors along with a rearview camera.

And there's more: über sensible is the 'climate' button that switches the touchscreen display to a full-screen climate control panel (after making your adjustments just press the button again to return to the previous screen). Also handy if you should accidentally get caught short of fuel (an easy oversight if you're carting around a carload of lively kids!) is the system's offer to take you to the nearest garage for a refill when the range drops to fifty miles.

The SatNav is user-friendly with full 7-figure postcode destination entry, 3D mapping, and clear-cut auto junction zoom (brilliant for motorway exit lanes) — everything, in fact, to keep you on the right track.

If you like a tidy cabin — and who doesn't, especially if you're regularly carting a family around — the Carens has more than enough in-cabin storage solutions (class-leading, actually) to keep everything organised: a large cooled glovebox, several centre console cubbies and trays, a lidded 'cave' ahead of the gearlever, real-world bottle-holding door bins, numerous cupholders, and two sizeable underfloor compartments in the second row.

MPV desirability is defined by seat packaging and the Carens scores strongly here too thanks to a second row with three individual seats (each of which can be slid fore/aft or folded down independently of the others) and a pair of third-row seats that fold away into the floor when not in use.

Wide opening door make for easy access to the middle row where each occupant gets a multi-angle reclining backrest with a comfy headrest and a full fist of headroom. Handy too are the flip-up trays with built-in cupholders fitted to the back of the front backrests; lower down are expanding storage pouches.

Also appreciated are the rigid bottle-holding door bins and the mesh sunblinds for the rear windows built-into the doors — just pull up and latch.

Worth mentioning too is that the middle seat's backrest can be folded down flat to provide a large table with three integrated cupholders. And of course there are air vents to service the middle row along with Isofix child-seat mounting points, and a seatbelt reminder to alert the driver if a second or third row passenger fails to buckle-up or unfastens their belt during a journey.

The third row's two individual seats are reached by 'walk-in' tilting outer second row seats. These also have their own bin and cupholder, and while there's just enough room to accommodate lightly-built adults, they're perfect for smaller children and teens who seem to love travelling back there in what they like to call the 'executive suite'.

If you're not using all seven seats you can leave the rear pair folded away under the floor and make full use of a 492-litre boot — and that's just loaded to below the window line; with rows 2 and 3 folded down (and locked safely in place) the boot is transformed into a 1,650-litre loadbay with a totally flat and easy-to-use seamless floor ending in a knee-height load sill.

More well-thought-out features include a dedicated storage well for the luggage rollerblind cassette and two boot lights — one of which is a removable torch (it recharges in-situ). Bag hooks and a luggage net are present and correct plus there's an extremely practical multi-adjustable load retaining system installed in the boot.

Usefully, the front passenger seat's backrest can be folded down if you need to carry extra-long items, and should you decide to make use of the removable tow-bar a braked 1,500kg can be pulled.

So how does it handle? Let's jump right in here — the Carens is more than satisfying to drive, and not just for taking the kids to school. Well-mannered with minimal body lean (it's stylishly low for an MPV) it drives reassuringly; noticeably so on B-roads and back roads. For the record, these latest generation Carens models are underpinned by a reworked suspension that delivers handling and ride gains.

Consequently, getting a move on is definitely something you'll be happy to do. Good brakes and steering help too; Kia's FlexSteer system is electrically driven and offers three weightings, from city-light to well-judged Sport which dials-in a tad more weighting. We found it the best driver-oriented mode and left the FlexSteer in its Sport setting throughout our week-long test.

While the suspension is firmer, that's in a control sense — what it does do is ensure a settled ride on quicker roads and a confident stride at motorway speeds. So, a beneficial 'firmness' then, one that's good for handling but, in ride terms, is agreeably compliant — we're confident you're won't be hearing any complaints from any of your passengers, whichever of the other six seats they're occupying.

With its versatile and easily-reconfigurable people- and cargo-carrying abilities, nice-to-drive character, contemporary good looks and comfortable cabin — and the best warranty in the business — the latest Carens has real appeal and not just for those needing seven seats. ~ MotorBar