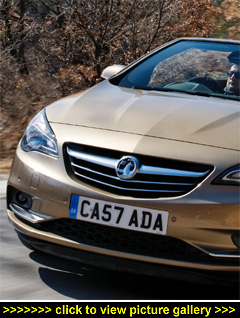 “If you ever thought of Vauxhalls
as ‘rather staid but dependable’
cars then it’s time to think again;
get a load of their stylish new 2+2
convertible, the Cascada — it’s a
breath of fresh air...”

SPORTING A CLEAN-CUT, POWER-FOLDING fabric roof, Vauxhall's two-door drop-top costs a lot less than you'd guess from its stylish looks: you can put one on your drive from Ł23,995 or, if you like to flash the cash, spend closer to 30K on the flagship model.

However much you pay though, your entry-level or range-topper Cascada will come with the same smart body — a body that's chic enough to stand comparison with premium rivals from Audi, BMW and VW.

A steeply raked windscreen, rising waistline and wide stance give the Cascada strong road presence. At 4.7 meters, it's longer than it looks which is good news for the 2 of the 2+2 along for the ride. And, of course, the classic use of a 'traditional' soft-top as opposed to a folding metal roof makes for a classy roof-up appearance — with it down, there are no unsightly roll-over hoops or bars to spoil the view. For the record, there's active rollover protection but, like a good bodyguard, it stays out of sight until needed.

Like an out-of-work actor the Cascada's soft-top will spend a lot of its time 'resting' — power-folded into the boot where, neatly capped by the rear deck panel, it awaits the rain. Press the button and it needs just seventeen seconds to transform the convertible Cascada into a totally weatherproof and refined two-door coupe.

There's no such thing as a free lunch and, that being so, great topless looks do mean a portion of luggage space (about 100 litres) is sacrificed to Aphrodite — roof raised, boot space is 380 litres (about the same as a family-size five-door hatch such as Volvo's V40); roof open, you get 280 litres.

However, there is space for some good news; the rear pair of backrests can be folded down to free up more room for two on weekends away or even for a spot of flatpacking.

Travel light though and you'll find the Cascada to be that rarity among convertibles — an honest four-seater rather than a disappointingly optimistic 2+2. And all four adults will travel in some style because the cabin, majoring on fine fit and finish and good quality trim materials (including carbon-fibre look inserts in the doors and centre stack as well as quality leather with contrast piping) gives off premium vibes.

The Cascada's cabin is spacious, with plenty of room in all directions around those travelling in the nicely-bolstered sports seats up front, and fitted out with lots of labour-saving devices: power seats enhanced with three-stage heating and cooling plus electric lumbar and extending under-knee support, one-shot windows, and an electric parking brake.

For those who think they prefer a traditional handbrake; be reassured that not only is the Cascada's electric version convenient, but it's also very effective at slowing the car down from speed in an emergency. We know not because it says so in the handbook, but because we've tried it!

Instrumentation is crisp and clear plus there's a digital speed readout — appreciated not just for its own sake but because the analogue speedo is marked in 20mph increments that need a longer look to register your road speed.

Nice touches include front seat belt servers (automatically extending arms) that bring the belt to the front seat passenger or driver and which save a lot of undignified squirming around — an irritation on many other two-door coupes and cabrios; then there's the powered front seat action to move them forward and back again for rear seat access.

Always welcome, and not just in a drop-top, are heated (as well as cooled for the sticky summer) front seats — the Cascada even has a heated steering wheel rim, which is brilliant and not just on mornings when Jack Frost's gadding about. And, important as it is, not something you'd think about until it's raining cats and dogs — the wipers do a brilliant job of cleaning the entire windscreen.

Taking your friends along is a pleasure in the Cascada — for them and you. Even with the roof raised normal-sized adults will feel at ease in the individual rear seats with enough head-, leg- and knee-room as well as wide outer armrests for relaxed travel on long trips.

Large rear side windows provide good views out and keep the rear cabin light despite the letterbox rear screen. Also good news is the easy access and exit with the top up to and from the rear cabin — the front seats power-glide forward automatically after you tilt the front seatback, and return to their original position every time.

The power hood is as good as you'll find on any premium cabrio and operates quietly in just 17 seconds. With the top dropped, rear seat passengers are even better catered for. With all four side windows down — or raised — the cabin is refreshingly bluster free with no wind rush: you can talk among yourselves without having to shout, even when cruising at 70mph. Top up, the cabin is as muffled as any all-of-a-piece coupe.

For those of you not yet on Facebook or only a single friend, a topless Cascada still provides plenty of enjoyment — if you aren't using the rear seats you can fit the windblocker that you'll find in its own tailored case in the boot. It can be unzipped, unfolded and slotted into place over the rear seats in seconds. In situ, it creates an unruffled pocket of air around the driver and front passenger.

The windblocker's fine mesh provides privacy along with protection from the wind, and it can be left in position when you need to raise the roof because its vertical panel doesn't harm rearward visibility. It also comes in handy at night if the following vehicle has badly adjusted lights!

The Cascada's boot-lid opens high to reveal a big boot — pull the levers to release the rear seatbacks and they fold forward and down without any further ado, opening up an unexpectedly accommodating loadbay.

For owners wanting to spec-up further still there's numerous boxes to tick on the options list, including the very good SatNav (Ł1,200), a triple-layer acoustic soft-top (as opposed to the regular item, which, actually, is perfectly fine and contributes much to the refined cabin ambience) for Ł300, and Vauxhall's Flexi-Ride with continuous damping control for a well-spent Ł790.

We've just been behind the wheel of the unleaded-drinking 1.6 Turbo, a four-pot that pushes out a useful 167bhp backed by a healthy 191lb ft of torque on call from 1,650rpm. Mated to a smooth-changing six-speed autobox, it's game for 135mph, with 0-60mph coming up in a crisp 9.2 seconds. The auto also offers a sequential manual mode which, in treacherous conditions let's you pull away in first, second or even third gear for maximum traction.

Officially it will return 39.2mpg in the combined (read that as 'average') cycle — driven by us, the 1.6's trip computer recorded a liveable real-world figure of 31.3mpg. For the record our test car was close to brand spanking new, with a mere 600 miles on the clock — a few thousand miles up the road we'd expect to see much closer to the high 30s.

And it's a nice motor, too, responsive with sufficient grunt for easy-going progress, whether you're ramping it up along a French autoroute or tootling around good old London Town.

The bane of many cabrios is scuttle shake. Vauxhall have underpinned the Cascada with a stiff chassis to inoculate it against any flex — we drove over all sorts of roads, good and bad, and never once felt the hint of any 'flexies'.

The Cascada can come with another, better kind of 'flex' — Flex-Ride. Vauxhall's adaptive damper system gives the driver a choice of three ride modes: Normal, Tour, and Sport. In Tour, Flex-Ride does a fine job of taking the sting out of poor blacktop.

Sport mode not only switches the instrument pack's illumination from white to a bull-baiting red, but tightens things up some by stiffening the dampers, sharpening up the throttle response, weighting up the steering, and raising the up-shift threshold.

In this state you'll be keenly aware of its ability to press on through bends and around corners; and all very neat and tidy it is too. In Normal the system will automatically activate sport suspension if your driving style suddenly calls for it, for instance, when you're pressing on through a winding section of road.

However, despite the all-turbocharged engine line-up, the rather weighty, sprung-for-comfort Cascada's real forte is relaxed top-down cruising that even the 19-inch alloys shod with 235/45 Bridgestone rubber couldn't spoil.

If you're confident enough to have conquered badge snobitis and you're in the market for a likeable, comfortable, genuine four-seater drop-top with a premium look that's good to drive, then the Cascada could be your automotive soul mate. — MotorBar