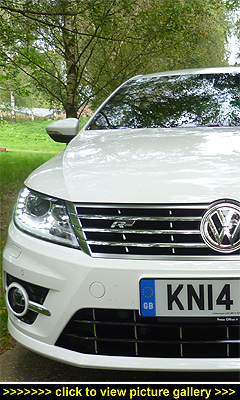 “On the web, short memorable
names are the most desirable.
And in the automotive world it’s
no different. Think of the car
names that come to mind the
quickest; evocative names such
as GTR, M3, and TT... But are
you familiar with CC?”

'CC' WAS ONCE a longer name, preceded and somewhat restrictively defined by 'Passat'. A Volkswagen, then. But not the conservatively-styled saloon you're perhaps thinking of, but a long, low and rakishly-lean, five-seater, four-door coupe-style saloon.

And when we say 'rakishly-lean' we mean svelte, upmarket styling that stands genuine comparison with a Mercedes Coupe — but for much less money. The R-Line 2.0 TDI CC we've been swanning around in for the past week costs under Ł32K. Not only that but it comes laden with quality kit and safety stuff that also makes it excellent value for money.

From the assertive tip of its quality chrome grille, flanked by LED daytime running lights and underscored by the purposeful R-Line bumper styling, the CC presents a premium look. Running above a high belt-line, its low sweeping roofline flows down over the rear screen between sleek LED tail lights. Finished in Candy White (a special paint finish costing just Ł255), it's an imposing piece of automotive architecture.

The interior follows through on the style front — in fact the entire cabin exudes an ambience that's every bit as good as what you'll find inside a BMW, Mercedes-Benz or even an Audi.

Swing open the driver's door and slide in behind the wheel. The bolstered front sports seats look fabulously inviting; upholstered in two-tone red and black Nappa leather, with ribbed centre panels, they're every bit as comfy as they appear. The driver gets power adjustment (including lumbar) while both front seats come with height adjustment plus three-stage heating.

Likeable touches include the refrigerated glovebox, the large lidded bin just behind the selector lever that converts into cupholders when required, front headrests which expand forwards in four stages, and the 3D SatNav mapping with well-timed spoken directions supported by split-screen graphics that make it very hard to go wrong!

And it's an easy cabin to acclimatise to: along with a fine driving position, all of the controls are straightforward and easy to use; and the beautifully clear dials and driver's information screen can all be read in a glance. Scrolling through the on-board computer is done using a button on the steering wheel, which, by the by, comes with grippy perforated 'work areas' and well-shaped thumb cut-outs and is great to hold and use.

The CC's rear cabin accommodation is equally pleasant and, like the front, access is through large, wide-opening doors with frameless windows.

Three adults can be seated in the back although two is a far more comfortable number as they can then put the wide centre armrest and two cupholders to good use. Despite the swooping roofline there's headroom for passengers under six feet tall; and they do get limousine grade legroom and kneeroom. Tellingly, it's an easy place to doze off in.

The capacious boot — there's an optional hands-free foot-operated boot opening release activated by waggling your foot under the bumper — has 532 litres of space for your 'stuff'. It's long and wide and welcomes serious luggage such as the covetable two-weeker classic aluminium Rimowa baggage favoured by the jet-set.

Lightly pull on a lever in the boot and the 60:40-split rear seatbacks fold down for those occasional large loads. Should you need to tow, then you'll be impressed that the CC can pull a braked 2,000kg. And if you're unfortunate enough to suffer a puncture there's a silver lining: the CC carries a full size spare wheel.

When it comes to powerplants the CC is very democratic, offering petrol or diesel power in the engine bay. Petrol units offer 157 or 207bhp; turbodiesels are 138 and 174bhp. Tested here is the 2.0-litre turbodiesel, putting out 174bhp (177PS) alongside 280lb ft of torque at 1,750rpm.

This highly-efficient BlueMotion version officially emits 137g/km of CO2 and returns 54.3mpg in the combined cycle (45.6 urban and 61.4mpg extra-urban). A week's motoring over 500 miles of urban and country roads saw a commendable average of 53.3mpg. Going by that, the big Six-Oh should be within reach of the average driver on long runs.

The fuel-saving BlueMotion technology also includes a self-effacing stop-start system — so efficient you'll hardly know it's there. Likewise the excellent six-speed DSG automatic transmission (with steering wheel-mounted paddles) with its fast, smooth downshifts that make the CC seem far quicker than the paper figures state. Noticeably so when in the DSG's Sport mode. A good job then that the brakes are powerful and progressive with decent feel through the pedal.

Actually, they make a very nice pair, the four-cylinder 1,968cc TDI and the DSG transmission; driven hard-and-fast or crawling though heavy traffic, the dual-clutch autobox guarantees a relaxing drive.

The turbodiesel itself is refined and powerful and more than happy to rev, proving to be unruffled even when your right foot calls up some sudden foot-to-the-floor acceleration. Not that it ever feels short of punch lower down the rev range.

Ask, and it will nip to 62mph in 8.4 seconds; give it the road and it will run all the way up to 139mph while playing the mile-eating motorway express with equal aplomb.

Under the skin the CC has some nifty driver-aiding features. First and foremost, the 2.0 TDI model comes with VW's XDS electronic differential which pro-actively enhances traction as it lays down the power through the front wheels, delivering more engaging handling when cornering. Added to that there's a sports suspension set-up and Dynamic Chassis Control — the driver can choose between Normal, Comfort and Sport modes.

Select Sport damping (press the button alongside the DSG selector lever) and you'll enjoy some spirited driving — handy on twisty, less-travelled backroads — with well tied-down body control and crisp turn-in from the well-weighted, speed-sensitive power-assisted steering that will take the CC where you point it.

As the name implies, Comfort makes for relaxing long-haul journeys. Even with its 15ft 9in bodywork, 15mm-lowered 'sports' ride height and 18-inch alloys, the clever dampers keep the ride impressively compliant and the well-insulated cabin remains library-quiet at speed. All-in-all the CC is a car you can travel in for hours and at journey's end climb out not feeling the least bit fatigued.

So what's in a name? If it's 'CC', a lot. With no direct rivals and the kerbside and on-the-move presence of a Mercedes-Benz boosted by a desirable cabin that makes driver and passengers alike feel special, the CC is a stylish and stand-out alternative to any four-door executive saloon. — MotorBar