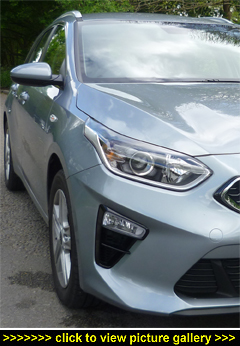 “Estate cars are the new black —
in spite of the stampede to own
a SUV, realists are more than happy
to stick with a wagon...”

AND WHY NOT when you can buy such good ones, such as Kia's latest offering — the new-from-the-ground-up Ceed Sportswagon. Appreciated by buyers will be the fact that Kia still offer a choice of both petrol and diesel powerplants.

Two petrols, in fact: an updated 118bhp three-cylinder 1.0-litre and an all-new turboed 1.4-litre with 138bhp. The diesel is also new, a 1.6-litre with 114bhp, clean emissions (109g/km) and an official combined consumption of 57.6mpg. Each engine is mated to a six-speed manual gearbox but a seven-speed double-clutch autobox can be had with the 1.4 and 1.6-litre engines.

This new third-generation Sportswagon is a roomy 4.6-metre family estate-cum-heavy-duty hauler and comes hot on the heels of the new five-door Ceed hatch. And, like its hatchback sister, it wears a smart new skin. The two Ceeds, from the front at least, are twins, sharing as they do the same frontal styling, notable for a wide Stinger-inspired grille and projector headlights with integrated LED daytime running lights.

At the tail they are, of course, as different as chalk and cheese — the Sportswagon is undeniably an estate with a nice cut to its jib courtesy of a long sleek glasshouse and a body-coloured spoiler capping the tailgate; wide LED taillight units add extra sparkle, while the elongated rear overhang benefits visually from some faux air vents behind the rear wheels.

Pull open the driver's door and the wide and airy cabin is inviting with lightly bolstered seats upholstered in a rather swish cloth with patterned centre panels. Headroom is generous and there's plenty of space for elbows too; the seat bases provide decent under-knee support and there's plenty of legroom as well as roomy footwells. Longer trips can definitely be enjoyed in comfort.

The dash architecture is well laid-out around a 'floating' touchscreen display. In entry-level '2' spec cars this is a seven-inch screen with an audio display; '3' and above trim level models come with an eight-inch touchscreen incorporating a full navigation system with all the 'comms' bells and whistles including high-end kit such as a JBL premium sound system and wireless smartphone charging.

Not that you're hard done by with the seven-incher, particularly if you, like a lot of tech-savvy others, are quite happy to use your smartphone for navigation: along with a six-speaker audio system there's Apple CarPlay and Android Auto, both with voice control, DAB radio with MP3 compatibility and the necessary USB and Aux ports for connecting up your media device, Bluetooth with voice recognition and music streaming, plus a reversing camera with dynamic guidelines.

Settle back in the driver's seat and you'll find it as supportive as it is comfortable; the easily-adjusted driving position is spot-on while the three-spoke leather-wrapped wheel adds tactile pleasure to steering the Ceed as well as offering plenty of multifunction action: audio, media, phone, driver's computer, voice control, and cruise and speed limiter operation. Visibility is excellent both to the front and sides as well as rearwards through the full-width back screen.

Instrumentation is via easy-to-read white-on-black analogue dials set in individual nacelles either side of a multi-mode driver's information display. You're also well served by cubbies for all that personal 'stuff', including a big glovebox, large dual-use cupholders, a handy bin between the front seats under the centre armrest, drop-down sunglasses holder, and bottle-holding door pockets. On top of all that the cabin is actually a very nice place to spend time — the interior design, perceived quality and fit-and-finish is definitely up there alongside its benchmark European competitors.

You'll also enjoy long years of peace of mind with Kia's seven-year warranty and Kia's service plans that now let you cover all the services throughout the the brand's industry-leading warranty so you can accurately budget your costs as far ahead as you plan to keep the car.

One of diesel's biggest selling points for drivers has always been its 'grunt' and a lot of driver's will miss that when governments finally outlaw them, although it's precisely that 'wall of torque' feel that electric engines deliver in spades. However, until such time as fossil-fuelled engines have, by governmental decree, ceased to be, it's nice to still have a diesel option.

The new 1.6-litre unit under the Sportswagon's bonnet is a refined oil-burner, proving to be almost whisper-quiet just about all of the time, unless you really floor the loud pedal (which you really don't need to do thanks to the muscular 206lb ft of torque).

It's nicely responsive too, courtesy of peak torque being on tap from 1,500 through to 2,750rpm. While fifth and sixth are perfectly suited for cruising and overtaking on motorways, the lower four ratios provide all the zing you need for the bulk of your everyday driving — and no hardship making best use of the g'box: the nice change action makes cog-swapping quick and easy. More good news — it sips rather than slurps fuel: a week's hard testing saw an overall average of 57.5mpg recorded that almost exactly matched the official 57.6mpg. Very impressive.

If you expect to carry as much cargo as you will people then the Ceed is as fine an estate car as any. Room in the back is enough for a six-footer to sit comfortably behind another up front, with a fist of headroom along with ample knee and foot room. Backrests are set at a relaxing angle and while two will be more than happy to share the drop-down central padded armrest with twin cupholders, three won't be a crowd. Bottle-holding door pockets, pouches on both front backrests, child-safe rear door locks, and Isofix child-seat fixings pad out the niceties.

Welcome news wherever you sit in this latest Ceed — the new fully independent suspension serves up an easygoing ride that's compliant enough to smooth out poor road surfaces while keeping the worst of it from disturbing the passengers. Good body control does its bit too by keeping the car level, with a satisfying 'hunkered-down' feel that benefits passenger comfort as much as it does the handling dynamics.

Kia have finessed this new Ceed's handling and there's torque vectoring to tighten up roadholding under cornering and to maximise handling predictability so that it's not only safe when heavily laden with cargo but also for those times you're pressing-on solo.

Aiding and abetting the Ceed's dynamics is nicely-weighted steering with feelsome turn-in and grip made 'stickier' by Michelin Sport Pilot rubber. Add in reassuring body control and there are more than enough reasons to smile even on the daily commute.

The Sportswagon's boot is as big as they come — bigger even than some wagons from the class above. Flip up the tailgate and you'll find a 625-litre boot just crying out for a family's luggage (and even the proverbial kitchen sink!).

Please, sir, may I have some more? You may indeed, and without any 'bumbling' about — just fold down the 60:40-split backrests (higher trim levels upgrade this to an even more useful 40:20:40 division with single-touch release levers) to create a 1,694-litre loadbay with a seamless and completely flat floor.

The boot lip is helpfully low, making it significantly easier to load heavy or bulky cargo. Below the main dual-height boot floor is a selection of seven underfloor compartments covering the whole floor area — some very deep; all very useful. A roller-style luggage blind keeps valuables secure from prying eyes and the bag hooks are sturdy enough to cope with some heavy duty shopping at Sainsbugs. However, if you prefer to load outside there are roof rails or, if towing is your thing, then a braked 1,200kg is on the menu.

With a growing family or shamelessly lifestyle needs, the smart-looking Ceed Sportswagon will serve you right! An impressive and well-rounded carryall that should prove as practical and as economical to run as you could wish for, and a very easy car to live with. ~ MotorBar