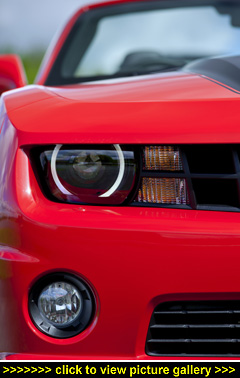 “It’s big and it’s brash and now,
after a ten-year absence, it’s once
again driving on the ‘wrong side’ —
Chevrolet’s new 6.2-litre Camaro
muscles its way into the UK...”

LAST WEEK I GOT BEHIND THE WHEEL of the Camaro, available only in the UK in left-hand drive form but with coupe and convertible body options. Returning to the European market after a decade-long absence, the Camaro, with its all-new 6.2-litre, V8 aluminium petrol engine, costs from Ł35,025 for the coupe and Ł40,025 for the convertible.

Happily, both versions also feature an all-new suspension system better suited for European driving conditions along with all the electronic drivetrain grip and safety functions for our market.

The two-door, four-seater Camaro is a very niche car — just seven Chevrolet UK dealers are handling the sales and service operations. There are no sales targets as the vehicle is limited by supply, but forty UK orders have already been taken and the first cars are now being wheeled out to UK buyers. Marginally most popular at the moment, and hardly surprising given our weather, is the coupe.

My test Camaro was the Ł40,025 convertible with an electrically-operated fabric roof. However, it came with the six-speed auto 'box option which adds a further Ł1,500 to the price. This automatic unit also has manual sequential shift functions operated either by the 'stick' or the steering-wheel paddle-shifters.

Top speed is limited to 155mph for both the manual and auto models; zero to 62mph takes 5.6 seconds in the automatic convertible (5.4 manual Convertible / 5.2 manual Coupe / 5.4 auto Coupe). Now let's get down to fuel economy — and when I say down, I really do mean down. For the Combined Cycle the manual model will return 20mpg (auto 21.5mpg) but a quick trip using main roads over Salisbury Plain returned just 14.2mpg. Ouch!

The CO2 emissions are best glossed over but I should include them, so sit down and take a deep breath: the auto emits 304g/km; the manual 329g/km. Should you care — and most buyers of American icons in this country do not — the road tax for both versions will set you back Ł1,030 for the first year and then Ł475 for the second year onwards. If you are a company car user (and you would have to be the owner of the company to give yourself approval to run a Camaro!), then the Benefit-in-Kind tax is 35%; that's the current maximum rate.

As already mentioned briefly, the latest Camaro has been re-engineered for its return to Europe. The steering remains on the left-hand side — part of its 'iconic appeal', say Chevy. The suspension has been revised with progressive-rate shock absorbers and thicker front and rear anti-roll bars for European markets where driving is faster, the surfaces more torturous and we have bends to contend with…

The disc brakes have been beefed up too, with four-piston Brembo callipers front and rear. The steering is also sharper and more precise for European tastes despite the use of 20-inch alloy wheels.

Overall, Chevrolet have done a good job of Europeanising their Camaro — gone is the soft, floating ride and handling but it is no match for the similar but less iconic products from Audi, BMW, Mercedes-Benz AMG or Jaguar.

The fixtures and fittings are, as always with American models, comprehensive: in addition to the expected fuel gauge, speedo and rev-counter, there are dials for water temperature, oil pressure and oil temperature, plus there's also a volt meter. There's even a head-up display function and, of course, AirCon, power windows and door mirrors are all fitted as standard. The latest design of LED exterior lights is also used.

The workmanship and quality seem a step-up as well, and although internally it's still behind that offered by the best, expensive high-performance Euro cars, it's acceptable and looks durable. And, to be honest, at a little over Ł40K for the Convertible, big on style and size does not mean too big on price.

But big on size it definitely is: the 'long bonnet' Camaro is 4.8 metres in length — and sensibly it comes with parking sensors. But the BIG issue is its width: excluding the door mirrors it measures 1,917mm (just under 6' 4"), so narrow lanes and our quaint British country roads can be a challenge... and more than once from the left-hand driver's seat I found the offside wheels running on the cats-eyes while my side of the car was brushing the hedgerows.

Which is why left-hand drive goes in the 'against' column along with running costs and taxes. But there's still plenty to like: this big, bold and brash iconic American muscle car is now fittingly engineered for European markets, with a high equipment tally and competitive pricing compared to European high-performance soft-top models.

And there's some more good news: the Camaro's long (2,852mm) wheelbase means there's plenty of legroom up front and in the rear, so owners can saddle up, move out and hit the trail in style. — David Miles